Oil’s Going to $1 Million a Barrel

“Oil’s about to spike to $140 per barrel,” Goldman Sachs told us just one month ago.

“No, that’s nothing!” replied JP Morgan. “Oil could go STRATOSPHERIC to $380 per barrel!”

“Wait, wait, wait — hold my beer,” said former Russian President Dmitry Medvedev the other day. “If we put a price cap on Russian oil, then crude prices are going to $400 per barrel!”

Those are the kind of predictions we’re dealing with today.

Hell, why not really shoot for the stars and lay down a $1 million-per-barrel price projection?

Of course they weren’t able to keep $200 oil out of their mouths — what did you expect during one of the biggest bull markets for oil in over a decade?

Don’t worry — plenty of the bears are getting it wrong too. Citigroup called for oil to drop to $65 per barrel on a 40% likelihood of a global recession.

So who has it right?

But we’ve become a nation of headlines, haven’t we?

What we do know, however, is that despite the anti-fossil fuel rhetoric most people have embraced over the last 10 years, we still consume as much as we ever have before.

In 2012, fossil fuels accounted for roughly 82% of total U.S. energy consumption. Remember, we’ve seen an incredibly aggressive pro-renewable push since then, with countries pledging to hit net-zero emissions by 2050.

Many governments were even more aggressive and set their goals well before that date. For example, Germany told us in 2021 that it was planning to hit net-zero as early as 2045.

Here in the U.S., President Biden insisted in April 2021 that we would achieve net-zero greenhouse gas emission no later than 2050.

Well, I’d give you three guesses as to how much we’ve lowered our dependence on fossil fuels, but you probably only need one. 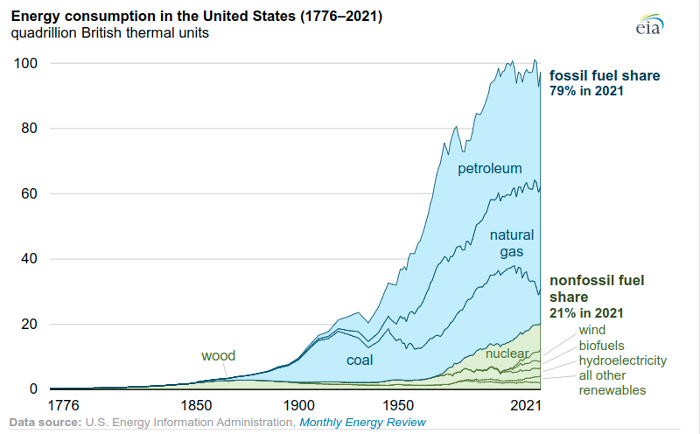 In 2021, oil, coal, and natural gas still accounted for 79% of our primary energy consumption.

Although there are deeper takeaways from this chart — such as the drastic reduction in coal usage ever since shale gas from the Marcellus region has turned the U.S. into a natural gas powerhouse or that renewable energy hasn’t made massive strides during the last decade — one undeniable truth is that our thirst for oil has never been stronger.

Even though we’ve all felt the pain of high gas prices for the last two months, we’re still paying to get our fix. Over the last four weeks, U.S. demand for petroleum products has averaged 20 million barrels per day, according to the EIA.

Although this is about 4.4% lower than the same period last year, keep in mind that we haven’t seen true demand destruction set in… not yet. Americans are overly eager to travel this summer, which is one reason why demand for jet fuel is up 15% year over year.

There are no two ways about it.

Imagine what the situation would look like if U.S. drillers never tapped into our vast tight oil resources.

I guarantee if that were the case, we’d all be speaking Arabic as we begged OPEC to sell us its oil.

Fortunately for us, that isn’t the case.

While those wild price forecasts will never come to fruition, a strong rally in oil is taking place as you read this, and the volatility has only served to make us more bullish for the rest of the summer.

More importantly, it’s setting us up for another round of oil profits.

I recommend you take a moment out of your day and let me show you three must-own oil stocks to trade before prices climb even higher.