The Optimistic Case for Oil

That's the latest estimate on how high global oil production will climb during the next eight years, according to a new study from the Belfer Center for Science and International Affairs at Harvard University.

If true, it would mean that global output would top 110 million barrels per day by 2020. Furthermore, the increase is expected to be driven by four major areas: Iraq, Canada, Brazil, and the United States.

Here you can see how the report breaks down this growth in the world's production capacity: 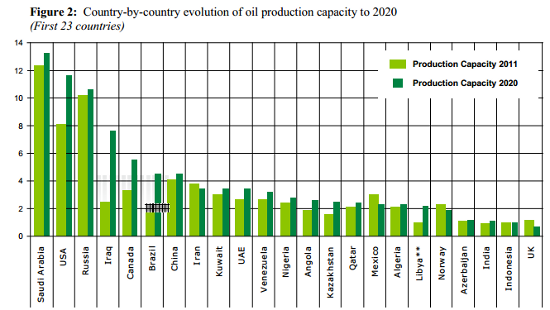 You already know my feelings on the abysmal state of Venezuela's oil industry.

According the report, the discovery of the Tupi field off the coast of Brazil will push production to approximately six million barrels per day by 2020.

Someone should mention this to Brazil, especially since Petrobras has actually lowered its production targets.

There's also another question that begs asking: Is it even crude oil the world will be producing?

Devil in the Details

The dirty little secret that you don't hear in the mainstream media is that nearly every one of these optimistic oil production reports is referring to total liquids production.

It only gets above 90 million barrels when we throw in all liquids, which includes crude oil and condensate, natural gas plant liquids, and other liquids like ethanol.

The real devil in the details concerning the world's crude oil production is right here:

As you can see, production of just crude oil and condensate has been relatively flat for years, increasing a mere 10% in the last ten years.

Even if we give drillers the benefit of the doubt and we see 15% growth over the next ten years, we'd still only be talking about 85 million barrels of crude oil and condensate by 2022.

So, if global production reaches 110 million bbls/d, it would mean that 25.5 million barrels of it would come from NGLS and other liquids.

That's nearly one-quarter of the world's oil production that isn't even oil.

What's the problem with that?

Aside from masking the relatively flat production growth for crude oil, also remember that NGLs have less than three-quarters of the same energy content as crude oil.

Of course, this doesn't address the other problem starting to rear its ugly head – the quality of our new oil supply.

We'll come back to those issues another time.

This optimistic study about the world's oil production to 2020 couldn't have come at a better time.

Less than a month ago, the IEA reported that global demand will rise by nearly one million barrels per day this year, topping 90 million bbls/d by year-end. Naturally, it's all too easy to see where this growth is taking place – China, Europe, Japan, and the United States.

And even among those four, the real story surrounds China, which is expected to account for almost half of that growth. By the time we ring in the new year, the Chinese will be consuming 9.9 million barrels per day.

But has the investment story really changed for us?

Forget Saudi Arabia, Iraq, and the rest of OPEC for now, because there are only two places to focus our attention. With Brazil curbing production projections, that leaves us two choices: Canada and the United States.

Fortunately, we're a step ahead of that game, because there's truly only one way to play the tight oil boom taking place in U.S.

No matter how you look at it, North Dakota's crude output will double, or most likely triple, from current levels.

It also means that the real value of these Bakken stocks will be seen over the next few years – that's a prediction you can bank on coming true by 2020.