A New Hope for Big Oil

And there it was: both ends of the spectrum given to me within five seconds of each other.

My immediate thought: they're both wrong.

Two weeks ago, I released my natural gas price forecast for 2017. After this morning's exchange, and with WTI trading just shy of $40 per barrel, today might be good time to look at the crude side of things.

So, what can we expect for the latter half of 2016 and through 2017? Have we seen the worst of this two-year bear market?

More importantly, are you positioned for the next upswing?

If you're not, I'll show you in a moment how to be prepared for it.

Here's the simple truth: Nobody can tell you — with 100% certainty — what the price of crude will be 12 months from now.

No quatrain by Nostradamus, crystal ball, or palm reader will ever be able to do that for you. If that were the case, then your investment approach would be incredibly simplified and free of any risk.

But hey, if you want to know how much you can pay right now for a barrel of WTI for July 2017, that's easy enough. That contract is trading right now for $44.97.

The EIA's latest Short-Term Energy Outlook report can be a good start. Below, you can see what its analysts believe will be the average price for a barrel of WTI and Brent for 2016 and 2017:

All we can do is to take a look at the current situation, the catalysts ahead, and come up with an outlook. We've talked about a myriad of factors that can influence crude prices, especially given the geopolitical mess in the Middle East.

For now, however, I want you to push those issues out of your mind and focus solely on the most important dynamic to oil prices: supply and demand. 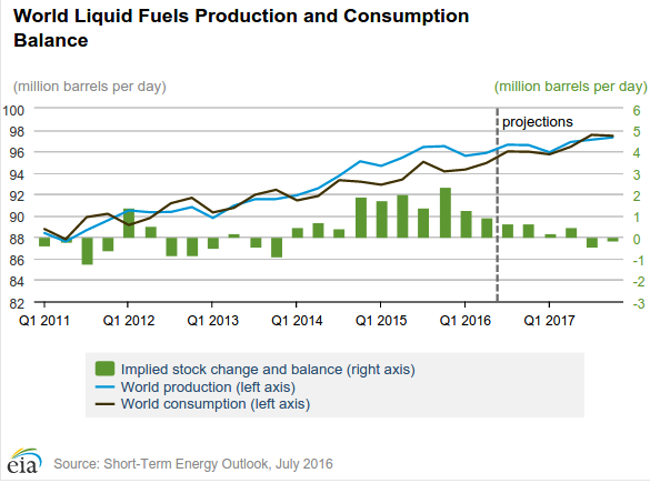 In 2015, global petroleum demand increased by 1.4 million barrels per day, with growth being driven (not surprisingly) by non-OECD countries. The EIA expects a similar increase this year, followed by a 1.5 million barrel per day jump in 2017.

But demand hasn't been the issue lately, has it?

Keep in mind that the U.S. is currently consuming approximately 20.3 million barrels of petroleum products (gasoline, jet fuel, etc.). Even though U.S. demand has been relatively flat for the last three decades, it still amounts to about 20% of total consumption worldwide.

It's eerily disconcerting how much we can count on the world's addiction to crude oil. No matter how much wishful thinking is done today, that addiction will not go away overnight.

It's simply the crude reality of the world we live in right now.

As you can probably guess, the issue over the last few years has revolved around the supply side of the equation.

Compared to the rest of the world, the U.S. and Canada have almost singlehandedly accounted for production growth outside of OPEC: 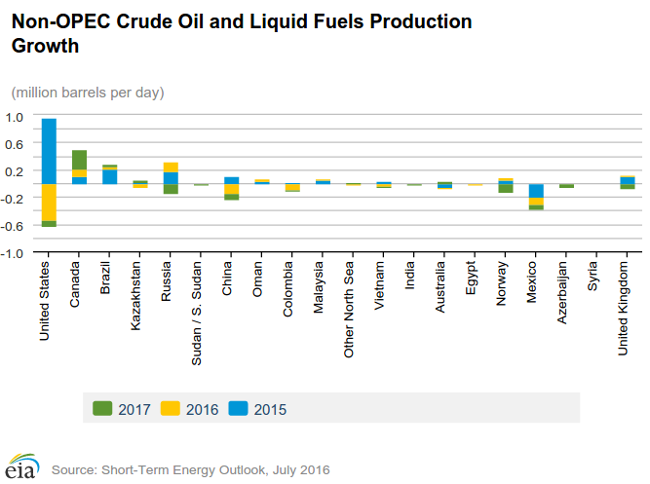 What would it take to push crude prices down to $20? For starters, we would have to see U.S. E&P companies radically increase their drilling activity.

And although the U.S. oil rig count has been making very slight gains recently — Baker Hughes reported a one-rig increase in the U.S. on July 29th — try to remember that there are still 411 fewer rigs drilling for crude oil in the U.S. compared to a year ago.

That's why you shouldn't expect oil to surge overnight to $150 per barrel.

The sweet spot now is around $55 per barrel. That's the point when more than half of U.S. production becomes economical to drill.

Barring some unforeseen, catastrophic disruption to global supply, oil's recovery will be slow and steady.

Of course, that won't deter the best companies from exploiting projects that are too good to be true. Truth is, there is a small, very select group of companies that are ready to tap into what one of my colleagues calls energy megafields.

Those companies are never easy to find, mostly due to the fact that they don't want the rumor mills leaking out the details.

Fortunately, you don't have to spend countless hours sifting through company reports, sniffing around between the lines for what they aren't telling you. You see, one of my colleagues, Christian DeHaemer, is about to blow the whistle on one of those massive projects that's about to be tapped.

But I want you to get the full details straight from him.

Tomorrow morning at 8 a.m., he's going to release it all to Energy and Capital readers, including you.

I strongly recommend you check it out before the market opens.

P.S. Part 2 of my "Oil Price Forecast Thru 2017," we take a closer look at how OPEC will shape the oil market.