Back in 2014, an intense board meeting full of oil execs took place in Texas, just six years after the financial meltdown caused oil prices to implode.

Despite the dour faces that gazed at one another, the mood should have been brighter…

Oil was booming in America.

By January 2014, our domestic oil production had gone from a 44-year seemingly irreversible decline in output to heights not seen in decades.

Within a few short years, the tight oil revolution that took place in the lower 48 states had single-handedly reversed course for the U.S. oil and gas industry.

Yet the oil boom that was underway wasn’t enough to lift the glum spirits that day.

You see, crude prices started falling sharply during the summer of 2014, putting a lot of pressure on tiny oil companies like WBH Energy Partners LLC.

I can almost hear them now, sitting across from one another: “Well, I guess all that’s left is the announcement.”

In the first week of January 2015, WBH Energy Partners LLC became the first shale oil and gas producer in Texas to file for Chapter 11 bankruptcy after more than half a year of declining crude prices.

That announcement became a harbinger of doom for what was to come.

In March 2015, another four oil and gas producers in North America followed suit. Soon, there was a cascade of oil and gas companies going belly-up, with the number growing throughout the year.

If you think 2016 was better, you might want to think again. Although WTI prices bottomed out around $27 per barrel during the first two months of the year and started climbing again, the damage had been done.

In total, approximately 70 oil and gas companies filed for Chapter 11 in 2016: 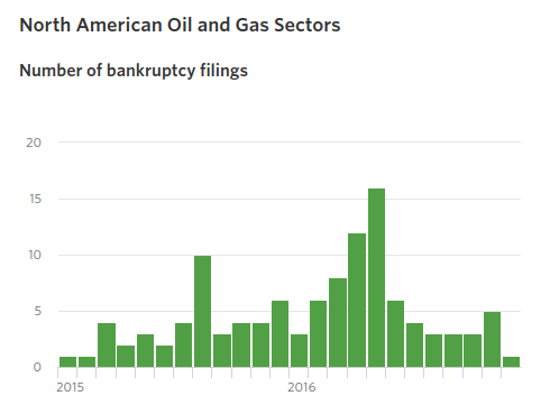 Of course, the culprit was right there in the filings: weak commodity prices, to the point that making interest payments on the mountains of debt they had accumulated in their drilling frenzy became impossible.

At the time, the industry didn’t get much help from the government. There were no bailouts to be had as the Saudis waged a price war against U.S. drillers, knowing that the cost of drilling and completing these new oil wells was high.

Today, we see the survivors of the bloodbath that took place in 2016.

And if you were an E&P company looking to make it through the carnage, you learned several lessons, the most important of which was to be disciplined with your investments.

That’s precisely what they did, and it’s one of the reasons why these companies were able to last throughout the pandemic, during which oil prices turned negative!

Today’s mantra in Washington, D.C., appears to be this: When in doubt, attack Big Oil.

I know that’s nothing new in the political playbook. It’s been the go-to boogeyman for as long as I can remember.

Normally, I wouldn’t give much credence to the anti-oil posturing when we’re just one week away from a critical midterm election.

Really, I get it. Big Oil is an easy target, and a few harsh jabs here and there can drum up a lot of support from your base. The fact that oil companies are hauling in record profits makes the decision to go after them even easier.

However, President Biden’s war on oil just took a dangerous turn after turning his sights back on the U.S. oil sector.

Just a few days ago, he gave it an ultimatum.

Is this fiery rhetoric simply a part of the hysteria that comes before a crucial midterm election?

Well, we’re going to find out next week.

No matter which team comes out ahead in Tuesday's election, President Biden will be forced to court U.S. oil companies and coax them into putting more drill bits in the ground.

I guarantee you that the wrong way to do this is calling oil companies “war profiteers” and threatening a windfall tax on energy companies if they fail to boost domestic production.

It’s hard to see how the president’s attack on domestic oil companies can last in a post-midterm environment, especially given the unrelenting geopolitical volatility today.

This is about more than Russia, dear reader. In fact, levying sanctions on Russian oil has only led to more of it going to China.

Not only is President Biden at odds with the Saudis, all but pushing them into friendly terms with both Russia and China, but he’s doing so without the support of the U.S. oil industry.

His only weapon — one he’s wielded for the last nine months — is historic sales from our Strategic Petroleum Reserve.

Sooner or later, those barrels from the SPR will stop flowing into the market, and then the president will be fighting his oil war with both hands tied behind his back.

We’ll find out which direction he goes next week.