What a difference a year makes.

It was a simpler time then, when a barrel of WTI was trading for $63 apiece, and production was humming around 12.1 million barrels per day here in the U.S.

In fact, the biggest question looming over us at the time was, “Just how high will it get?”

After all, our tight oil output had been screaming higher for more than a decade as the shale boom pushed drove production to record heights.

By the time we rang in the new year, we were pumping more than 13 million barrels per day.

Just how good did we have it?

For starters, the U.S. became a total energy exporter for the first time since 1953.

Well, then take a look for yourself: 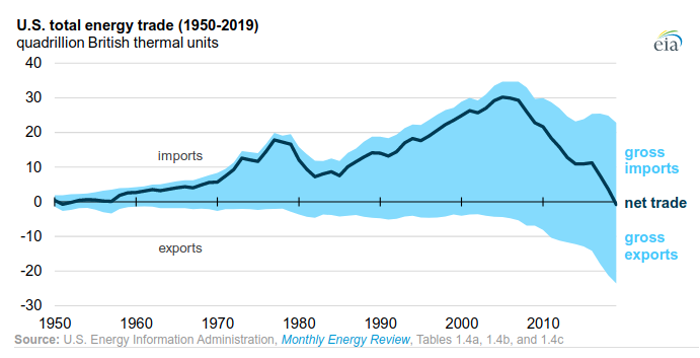 The EIA reported this week that total energy exports exceeded imports in 2019. The catalyst for that was all thanks to booming petroleum and LNG exports.

More importantly, our tight oil supply is the reason why our oil imports last year declined by one-third.

Yes, you can say things were going quite well for the U.S. energy industry.

In fact, things were going too well!

The major concern was that we were producing too much oil, and although global demand was strong prior to this pandemic, I told you that one of the best places to look for oil profits was in the tanker sector.

But let me give you a little more perspective on our current situation.

This week, the price for a barrel of West Texas Intermediate to be delivered next month was negative $37.63.

Think about that for a minute, let it sink in.

Somebody was paying you to take their crude oil off their hands.

What a difference a year makes, indeed.

How will things turn out in 2020? Hopefully you’re not looking for any optimism from the EIA.

In their latest Short-Term Energy Outlook, the EIA projects that WTI crude prices will average $29.34 per barrel this year, then climb 40% to average $41.12 per barrel in 2021.

As you can see below, the fundamentals have been upended entirely thank to COVID-19: 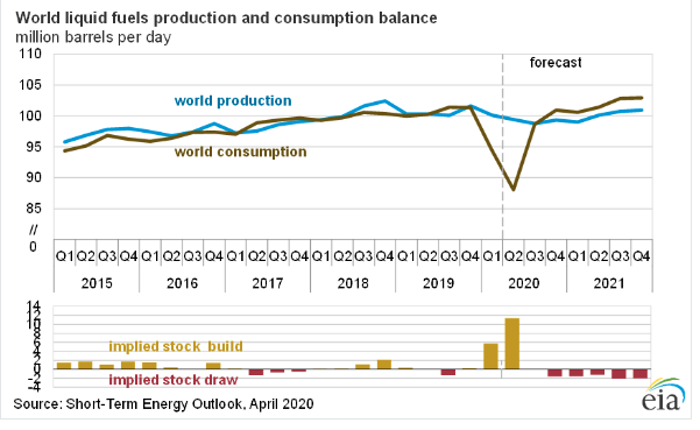 According to the EIA’s projections, global petroleum consumption averaged 94.4 million barrels per day during the first quarter, or roughly 5% less than their previous forecast predicted.

Unfortunately, the fundamentals are getting even worse over the short-term.

Yet, that doesn’t mean you need to miss out on the opportunities that have opened up from this chaotic mess.

Rystad Energy reported that the demand destruction will cause nearly 2 million barrels per day of oil production was shuttered in April, with Canadian producers taking the hardest hit.

We’ve gotten to the point that the Railroad Commission of Texas is considering placing production limits on state producers.

Personally, I’m not convinced they’ll do it.

If they do, I have a feeling they’re in for more than they can handle. Not only would it be the first time the RRC has curtailed state production since the early 1970s, but the process would be a logistical nightmare that they may not be prepared for.

Meanwhile, inventories will continue experiencing dramatic builds until capacity is filled to the brim.

Keep in mind that at this pace, crude storage capacity in the U.S. will be reached in May.

And that, dear reader, brings us right back to the same sector that we’ve been bullish on for months — oil tankers.

Right now, roughly 250 million barrels of crude oil are being stored on floating tankers, with 10% of the global tanker fleet simply parked offshore.

We’re looking at an unprecedented moment in floating storage, and day-rates inside the tanker market will keep rising while inventories are filled.

Of course, the supply glut will only deepen as the Saudis flood the U.S. with even cruder, which is precisely what they’re doing now.

You see the opportunity now, don’t you?