With the midterms squarely behind us, will we finally start to see crude prices head higher?

The immediate answer from the market is a firm yes, as WTI crude is trading slightly higher this morning.

The biggest catalyst for higher oil prices should’ve been the deadline that just passed a few days ago... at least it was until the politics came into play.

After President Trump played it tough with North Korea earlier this year, his sanctions on Iran’s oil industry were going to be a nail in the coffin.

They were going to bring the Supreme Leader to his knees, right?

The hammering blow we expected turned out to be a lukewarm jab, as Trump offered waivers to eight countries: South Korea, Taiwan, Turkey, Greece, Japan, China, India, and Italy.

That didn’t come as much of a surprise to some of us, including my colleague Luke Burgess, who saw this coming a mile away.

Not surprisingly, these waivers were given just before the midterms and helped keep a lid on oil prices, which had surged to over $75 per barrel in early October.

I can’t help but ask whether or not these waivers will do much good to global supply, which is already tight.

And with midterms in our rearview mirror, how soon will it be until Trump goes on the attack again?

If he does, it’ll come at a time when Venezuela’s oil industry is crumbling and, more importantly, two of the world’s largest producers — Russia and Saudi Arabia — start talking about cutting output again to bolster prices.

So where can we expect prices to go?

According to the EIA’s Short-Term Energy Outlook, which was published this week, the supply/demand fundamentals aren’t projected to tighten until the second half of 2019: 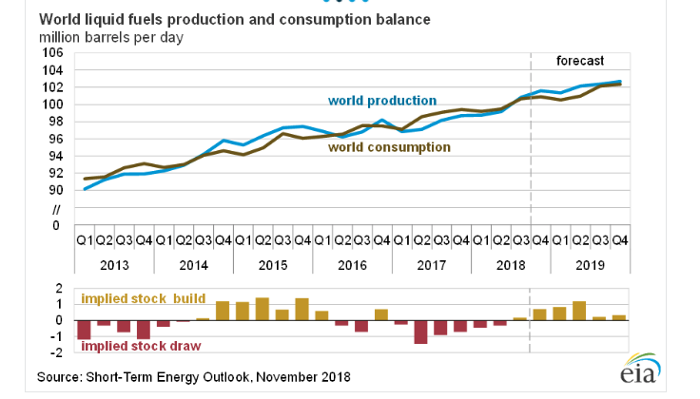 Here’s a look at the EIA’s price projections:

From a production standpoint, things are going to get interesting.

The massive growth in U.S. oil output since 2008, all thanks to the development of our tight oil resources, is going to cap out soon.

Make no mistake, dear reader; that’s a ton of oil at our fingertips.

And the world is going to need every drop of it.

Your first question has to be, “Who’s the winner in all of this?”

Let’s take a look, shall we?

After all, they’re the names every one of us knows and recognizes immediately.

These massive, international oil companies have been around in one form or another ever since John D. Rockefeller founded Standard Oil in 1870.

And given the profits that have been gushing into Big Oil lately, you might even be tempted to pick one up yourself.

But how good have things really gotten?

Well, ExxonMobil, for example, saw its earnings surge after reporting one of its best quarters in over four years. In case you’re counting, Exxon’s year-over-year earnings spiked 57% during the third quarter of 2018.

It wasn’t alone, either.

Yet it’s more than higher prices.

Look, I know some shareholders are thrilled at the possibility that Big Oil will start putting those higher earnings to good use via buybacks; a few companies have already laid out plans this year to buy back billions of dollars in shares.

Are they poised for an even stronger 2019 performance?

Look, I won’t deny that Big Oil had a strong run last quarter.

Moreover, the companies’ long-standing dividends have always been attractive to investors with an eye for the long term — there’s a good reason we call them “widow-and-orphan” stocks, a nickname for companies that can provide a steady dividend and hold a very low degree of risk.

But I can’t help but think there are better opportunities elsewhere.

If there’s one thing we know for certain, it’s that more pipelines will be absolutely critical to producers in the Permian Basin who are looking to get their product to market.

Right now, more than 3.5 million barrels per day are being extracted from beneath the Permian Basin, and more than half of U.S. liquids growth is being driven by this world-class oil play.

We haven’t seen this kind of growth anywhere else in the world.

I’ll put it this way: The amount of crude oil flowing out of the Permian Basin would make it OPEC’s third-largest producer!

Unfortunately, the huge growth spurt we’ve seen over the last decade also means pipelines in place simply can’t keep pace. Let’s also keep in mind that there may not be much relief until 2020 — which is when new pipeline capacity would come online.

That’s where infrastructure players like Plains All American Pipeline (NYSE: PAA) will shine. Big Oil companies aren’t the only ones that can turn a nice profit when oil prices are high, and Plains All American’s earnings are projected to grow by 41% in 2019.

It’s even offering a higher annual yield than Big Oil.

Of course, this is just one gem in the midstream sector to put on your radar.

And if just one or two of the catalysts we talked about earlier are triggered and prices climb higher in 2019, you’ll be glad you’re looking in the right spot.