So, oil prices are going to rise...

Hell, the entire market knows it at this point.

WTI is making its way toward $75 a barrel this week; Brent is teasing $80 a barrel.

The market has finally woken up.

The pundits are raving about their favorite oil stocks — never mind that all those picks are the same. They grab the biggest, most identifiable names in the sector and laud them as the hottest oil stocks of the moment.

Do you know how to tell?

Well, here’s a hint… If one of those stocks is ExxonMobil Corp., you’re wasting your money...

To which I reply, “It's also the last ones to the party!"

Sure, Exxon’s production in the Permian Basin is up by almost 20% over the previous year. The "Big Oil" behemoth currently runs almost 30 rigs in West Texas and controls 1.8 million acres across the Permian Basin.

But I want you to ask yourself if you think this $350 million stock is really the best way for you to make money on rising oil prices...

And you know what? You’d be sorely disappointed at whoever told you to add Exxon to your portfolio.

Let’s say you picked up shares of Exxon at the beginning of the year.

But let’s say you'd had this epiphany a year ago and thought you'd get a jump on everyone else...

Unfortunately, you’d only be breaking about even right now.

How about we make things even easier? What if you'd decided to call the bottom in oil two years ago and jump into Exxon?

Remember, oil prices have soared more than 150% since February 2016.

I have some bad news for you...

You would've lost money by betting on Exxon over the last two years.

If you were to put Exxon up against the two smaller independent oil stocks that I've told you about recently, you would've been better off staying away. It's what I like to call the "Big Oil trap."

I’ll let you take a look for yourself: 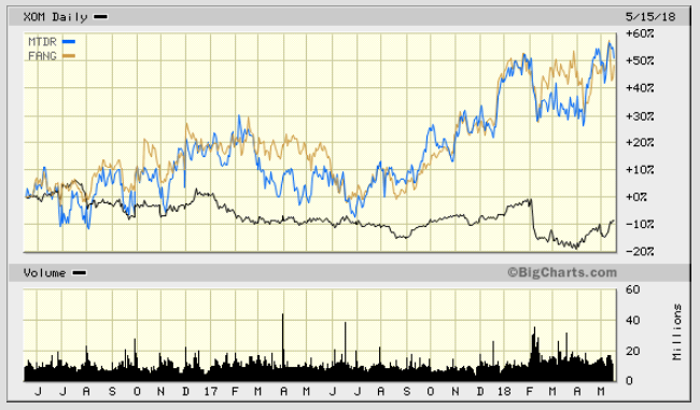 It’s not even close.

All you have to do is invest smarter.

And it’s easier than you might first think, too.

Look, the cat's out of the bag with the Permian Basin.

There are 3.2 million barrels of crude oil being extracted from the region on a daily basis.

For a little perspective, that would make it the second-largest member of OPEC. Only Saudi Arabia pumps more — assuming, of course, that Iran’s production takes a nosedive once sanctions are reinstated.

To this day, one of the most profitable periods of time for my readers and me was almost a decade ago — when we saw what was about to happen in the Bakken. At the time, I doubt that the mainstream media could've even told you what tight oil was, let alone seen the value in it.

Of course, people have known that there were billions of barrels of oil locked in the Bakken as far back as the 1950s.

But it was only drilled as a last resort. It was a desperate attempt by a company to scrape away any oil that it could to minimize its loses.

All it took was the combination of horizontal drilling and hydraulic fracturing to create a formula for success.

What’s interesting is I’m seeing a similar situation developing right now in an oil play that you won’t hear about from CNBC.

And the same people who are telling you to buy ExxonMobil right now have never even heard of it.

But that'll all change by the end of the year.

In fact, it’s what I consider a "virgin oil play" because drillers have completely ignored it in the past — like how drillers skipped over the Bakken in the '50s.

Next week, I’ll reveal this new play to you in Energy and Capital.

Trust me, you won’t want to be late to this party.

$80 Oil is in Sight
Energy and Capital editor Keith Kohl shows readers what it would take for oil prices to reach $80 per barrel. Things could get really ugly from here...
Ten Reasons for $100 Oil
There are a number of ways to make money from the stealth bull market in oil. Inside, Energy and Capital editor Christian DeHaemer gives you 10 reasons for why oil is back on the bull and how you can play it..
Vindication for Oil Prices
Oil prices are high and getting higher. WTI just crossed the major psychological barrier of $70 a barrel. Brent is at $76.59. And get this: The oil price has rallied despite a surge in the dollar!
4 Million Reasons Why Investors Love Trump's Iran Sanctions
Energy and Capital editor Keith Kohl gives readers the full details behind Trump's latest round of sanctions on Iran and what it means for a certain group of oil investors.
Hydrogen Fuel Cells: The Downfall of Tesla?
Lithium has been the front-runner in the battery technology market for years, but that is all coming to an end. Elon Musk is against them, but Jeff Bezos is investing heavily in them. Hydrogen Fuel Cells will turn the battery market upside down and we've discovered the tiny company that is going to make it happen.