What Cleantech Investors Need to Know About Oil Prices

The future price of oil is a vitally important consideration for cleantech and renewable energy investors. When prices are high, it's good for cleantech, and when they're low, it's bad. Yet too few cleantech investors are equipped with the ability to forecast them.

The price of oil is set daily and globally by a complex interaction of many factors, including supply and demand, relative valuations of currency, speculation in oil futures, delayed feedback loops, economic growth rates, money flows of large investors, geological factors, geopolitics, and many more.

Oil shot to $147 in 2008 because of a particular highly leveraged alchemy of those factors, and it fell to the low $40s today as the leverage unwound and global recession took its toll on demand. Such volatility makes for an extremely cloudy investment outlook, particularly when the investment horizon is measured in decades. That volatility is likely to increase in the coming years.

In order for cleantech investors to succeed then, they must have a deep and rigorous understanding of these factors and be able to anticipate oil prices.

The rate of global conventional crude oil production has been stuck at roughly 74 million barrels per day (mbpd) since 2005, despite a tripling of oil prices over that period, ending oil's long history of supply growth. This is predicted by peak oil models, which describe how oil production grows, peaks, and then falls in a rough bell curve shape for any given oil producing region. All increases in "oil" supply since 2005 have come not from regular conventional crude, but from unconventional liquids such as heavy and deepwater oil, oil sands, natural gas liquids, and biofuels, bringing the world supply of "all liquids" to between roughly 84 and 86 mbpd since 2005 (Energy Information Administration, April 2009 International Petroleum Monthly). 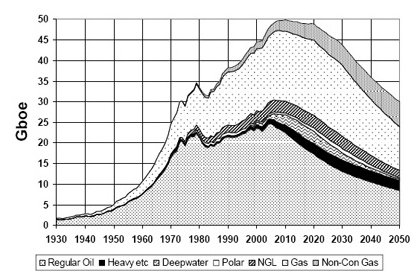 A close study of the all liquids peak reveals a bumpy plateau from roughly 2005-2012, after which oil production will go into terminal decline. The absolute peak will likely prove to have been July, 2008.

The International Energy Agency (IEA) projects that under normal circumstances with regular maintenance and investment, simple depletion of mature fields will cut about 5% from the global supply each year, which is far in excess of what new oil projects may hope to offset.

While the world is certainly not "running out of oil," since nearly half of it is yet to produce, the world has definitely run out of cheap and easy oil. From now on the oil we produce will be progressively harder to get, and more expensive. This point has been emphasized in recent years by the CEOs of nearly all major oil companies, as well as the major oil data providers like EIA and IEA.

The cost of producing oil varies widely between under $20 for old projects in Saudi Arabia, to $100 and up for sources like oil sands and shale. The global average cost of a new barrel of oil production capacity has been estimated at between $60-80. 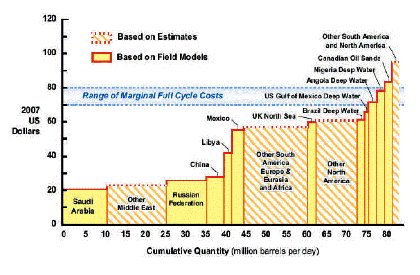 The domestic budgetary needs of producers also play a role, with OPEC producers needing at least $50-60 oil, and Russia needing $70.

Future production costs will be even higher. Credible experts maintain that oil will have to remain above $100/bbl before investors will commit to the expensive and risky marginal projects that will deliver the oil we need over the next several decades. 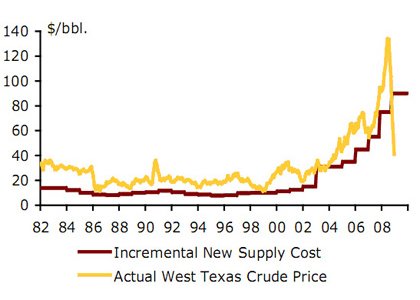 Saudi oil minister Ali al-Naimi has warned that the world needs $75 oil to sustain ongoing investment. Current prices "are wreaking havoc on the industry and threatening current and planned investments," he said.

With oil selling for half the new production cost, only older conventional fields are currently profitable. Well-capitalized companies like Chevron and Shell can afford to continue investing with such an uncertain horizon, but marginal producers have been forced to lay down their rigs and cut back on development as credit availability fell along with prices.

Consequently, projected new oil production for 2012 and beyond may not materialize, for a lack of investment now. It typically takes 2-10 years for oil production to commence once a project has broken ground.

Under-investment is precisely what the IEA warned about in its World Energy Outlook 2008, in which they said the world would need to invest over $1 trillion dollars per year for the next 22 years just to maintain current supply levels. Under the current credit crunch and low oil prices, that kind of investment is simply not happening. This is likely to accelerate the global decline rate to 9% and above, according to the IEA.

Oil Is Priced At The Margin Of Supply

A thin, roughly 3% margin in spare production capacity is the prime mover of the oil markets. Supply remained flat while demand grew from 2005 through the first half of 2008, driving spare capacity from over 2 mbpd to less than 1 mbpd, which precipitated a spike in oil prices. When demand fell sharply with the global recession, spare production capacity grew to more than 4 mbpd, and prices overshot well below the production cost.

When the global economy recovers, perhaps in the 2010-2011 time frame, spare production capacity will collapse to a thin margin, and prices will spike again. BP Chief Executive Tony Hayward said in November, "Increased demand will stretch the system to its limits, and this will cause another upward spike in the price."

In the coming decade, we should expect a series of cycles like the one we saw over the last 12 months. As supply remains flat and begins to decline, demand will dictate the price. As global demand increases along with economic recovery, spare production capacity will quickly diminish to almost zero, and prices will spike again, causing demand to crash and prices to fall. As these cycles continue, we may expect volatility to increase.

For cleantech investors, this is both good news and bad news. Poor price visibility will tend to restrict investment capital in the oil patch until such time as the global oil price stabilizes above $70 a barrel. At the same time, the predictability of the renewable energy cost structure will increasingly favor it. For example, investors may come to view a modest 4% return on a third-party solar financing arrangement as a very desirable and stable investment.

For oil investors, current prices are an unquestionable bargain. Oil infrastructure providers and companies with sizable reserves now offer the investment opportunity of a lifetime.

Ultimately, the decline of oil, followed by the peak of natural gas and coal in roughly the 2020 - 2025 time frame, means that renewable energy and energy efficiency technologies probably cannot grow fast enough to fill the gap. Therefore, the growth opportunity for those sectors is essentially unlimited for the foreseeable future.

For detailed data, charts, and analysis on the peaking of fossil fuels and the renewable renaissance, investors may want to explore my exhaustively referenced book, Profit from the Peak (Wiley, 2008). My second book, co-authored with my colleagues Jeff Siegel and Nick Hodge of Green Chip Stocks, is Investing in Renewable Energy (Wiley, 2008) and offers a more detailed focus on renewable energy and cleantech.

Investor's Note: My colleague, Nick Hodge, is using his knowledge of cleantech and oil markets to generate profits for thousands of readers of the Alternative Energy Speculator. In fact, he's already closed 26 winning positions this year, averaging more than one per week. And the next cash-out could come any day. Click here to learn about the stock Nick thinks is the next big cleantech winner.