“I think it's got plenty of room to move.”

When I first heard those words behind me, I jumped. It was still early, and I wasn't expecting anyone else in the office at least until the morning sun was up...

I turned to find Steve Christ peeking over my shoulder, staring at the chart on my screen.

The company in question was Atwood Oceanics — an offshore stock my Energy and Capital readers have been following for quite some time.

Nodding his approval, our discussion quickly veered into the offshore sector.

Less than a week has passed since Seahawk Drilling announced its plans to file for bankruptcy protection. Just days before, we learned that Ensco plc and Pride International were merging in a deal reportedly worth $7.3 billion.

In case you were wondering, Ensco plc is the world's second largest offshore oil and gas driller, right behind Transocean Inc.

Needless to say, it's been a busy week for the offshore community.

But are offshore stocks the right move today?

The battle over offshore drilling has been waging for years, even though it took BP's Macondo blunder in the Gulf of Mexico (GoM) to really push the issue to the public stage.

Since then, the Obama administration has been playing hardball...

A month after the explosion on the Deepwater Horizon, the government slapped its first ban on offshore exploration deeper than 500 feet, followed by a seesaw of events — including further government bans and court rulings overturning those bans, throwing the entire offshore industry into uncertainty.

Earlier this month, a Louisiana judge ruled the government was in contempt after their latest round of policy changes that hampered offshore drilling.

Unfortunately for Seahawk Drilling, they've become another victim in the offshore battle.

According to the company, their fall was due to the "unprecedented decline in the issuance of offshore drilling permits following the Macondo blowout."

Drillers operating in the Gulf of Mexico have tougher times ahead.

Last week, I told you about the EIA's dismal production projections for the GoM. They expect oil production to decline by approximately 500,000 barrels per day over the next two years.

Devil in the details

There was another part of the Seahawk bankruptcy that caught my attention. Hercules Offshore, Inc. (NYSE: HERO) recently announced it has made a deal for Seahawk's 20 rig drilling fleet.

The deal was a slam dunk for Hercules, and valued around $105 million — $25 million in cash and 22.3 million of Hercules' shares. They gained 20 shallow water rigs to add to their GoM fleet.

If you need a better idea of just how well this went for Hercules, consider this: The company could technically scrap all 20 rigs and still come out even.

But as I hinted at above, the devil here is in the details...

Putting all your eggs in one basket can't be the best option here...

With the addition of Seahawk's fleet, Hercules now has 42 of its rigs in the GoM (only nine are located outside of the Gulf of Mexico). Although the company boasts the fact that its rigs are in locations all over the globe, their main focus is clearly in the Gulf.

The latest deal with Seahawk was too sweet for investors to pass up.

As you can see below, shares of Hercules jumped the day the news broke: 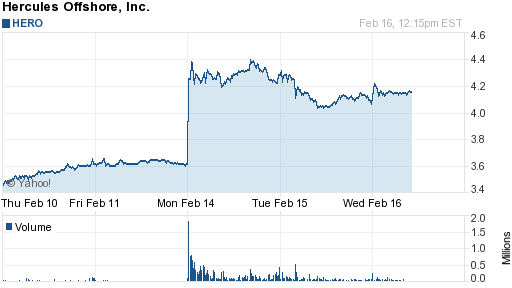 Unfortunately, even Hercules' recent bargain isn't enough to pull them out of the gutter.

Still swamped in debt, it would take a lot more than an additional twenty rigs (nearly all of which are three decades old) to pique my interest.

In fact both Hercules' and Seahawk's performance has been less than desirable for investors over the last two years:

But don't be too disheartened; as Steve and I agreed earlier, there are some offshore stocks that still hold a lot of potential.

The last time we talked about offshore profits was nearly three months ago.

At the time, Transocean (NYSE: RIG) and Atwood Oceanics (NYSE: ATW) were faring well for investors...

Since then, both have continued to perform, and are certainly worth a second look: