Where the Rare Earths Aren't Rare at All

Over the past few years, as the Dow has whipsawed from over 14,000 to below 7,000 and everywhere in between, I've actually made some decent money.

My "managed" individual retirement account (IRA) was hemorrhaging money fast, so I had to do it myself.

In December of 2008, I bought a tiny Chinese battery manufacture that I knew Buffett's team had been snooping around.

My readers and I watched it climb more than 600% in the next year: 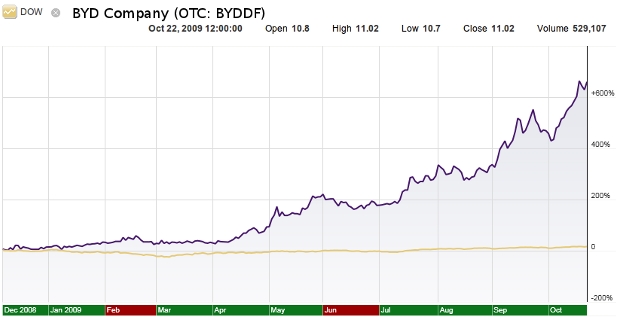 In 2010, I found a tiny nuclear company with plans to build its own reactor — and it didn't take that one long to take off in similar fashion: 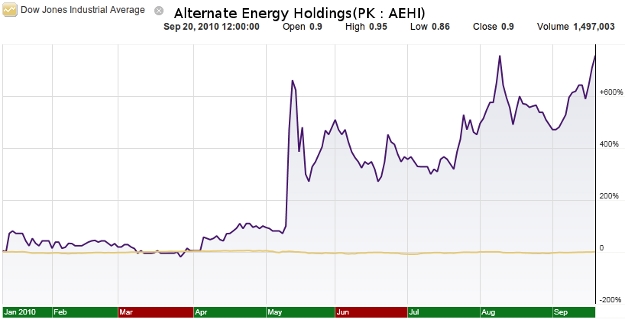 More recently, I learned of a metal engineering company with beryllium expertise that applied to the defense, aerospace, and nuclear energy industries. I even went to one of their factories and shared the story and footage with you.

That company had no problem adding over 200% to its value. 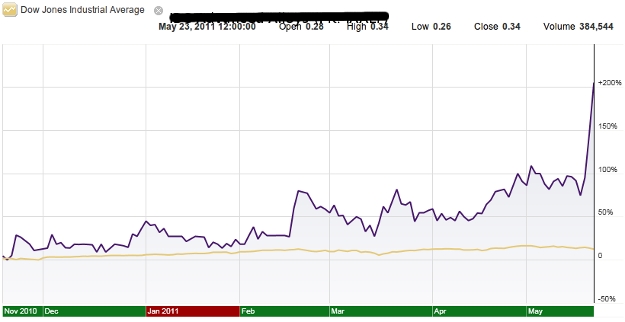 Point is, I have a proven history of finding tiny companies with great products or ideas... and bringing their stories to the masses before anyone else.

And the one I want to tell you about today is no different.

Spread like a vast ocean of frozen molasses, it's the only oil formation in the world suitable for surface mining.

The Alberta government believes a minimum of 170 billion barrels of oil are recoverable — possibly as much as 315 billion barrels. And right now, it's already producing 1.5 million barrels a day, or 2% of daily global production.

No doubt about it, the tar sands have already made many energy investors very rich... and they still are.

But that's not why I recently flew to Fort McMurray.

And it’s not why I paid a private chopper $2,000/hour to fly me even further north into this remote region of Alberta.

You see, as excited as I still am about the newly-unleashed oil from tar sands, there's something else up here that has the potential to be even more lucrative...

All told, it's more than 612 million pounds of metal wealth spread over 700,000 acres — enough to supply the entire world for the next 100 years.

The value of the lithium alone is enough to send this stock 31x higher. Then there's the vanadium, exceeding its market cap by 291 times. There are also millions of tons of rare earths, uranium, moly, and more.

Why Mining Will Never, Ever Be the Same

You see, it wasn't so long ago that nobody thought the metal wealth spread across this vast Canadian terrain would ever be recoverable — even though much of sits right on the ground.

Sounds strange... until you understand why: All of this metal is locked in black shale deposits, raw organic material fused from pressure at the ocean's floor millions of years ago.

And because all these metals are of such a low grade — dispersed so finely throughout so much shale — it was considered too difficult and costly to extract them when they were first found here in 1995.

But a new technology will finally make this metal wealth accessible. And most incredibly of all, it promises to do this using only air, water, and microbes.

The Mine that Almost Never Was

To understand how, all you have to do is go back to October 1, 2004, when the European Commission's 6th Framework Program launched its own metals recovery project.

Since 1980, different companies had tried grinding, crushing, and treating the ore surrounding these metals... but to no avail.

Of course, the Europeans could have extracted the metals if they really wanted to — but that would've required using large amounts of arsenic and cyanide to liquefy them, thus risking the poisoning of vast swaths of soil, rivers, lakes, and streams...

One company had been working round the clock since 1987 to develop a solution that does not call on the use of heavy and expensive machinery or dangerous chemicals to release the metals.

And after years of studying and experimenting with different strains of bacteria, they discovered a source of free labor provided by Mother Nature herself: local bacteria from the ground that can eat right through the ore!

The solution they came up with is breathtaking in its elegant simplicity.

After the turn of the 21st century, Talvivaara Mining (TLV.L) had finally done it — and caught the attention of the European Commission.

So in October 2004, they joined forces with eight countries, seven universities, and the Geological Survey of Finland to begin work on what would be the world's cleanest, most energy-efficient mining project ever.

In July 2005, the first ore samples were mined, crushed, and mixed with the bacteria at a demonstration plant...

Just 27 months later, 78% of the metals were recovered!

Let me show you exactly how this "natural extraction" process works:

First, the ore is extracted, crushed and stacked inside of a heap pad. Then bacteria are sprinkled onto the ore.

Low-pressure fans supply the bacteria with air from outside. Up above, water sprays down, washing it into the ore. 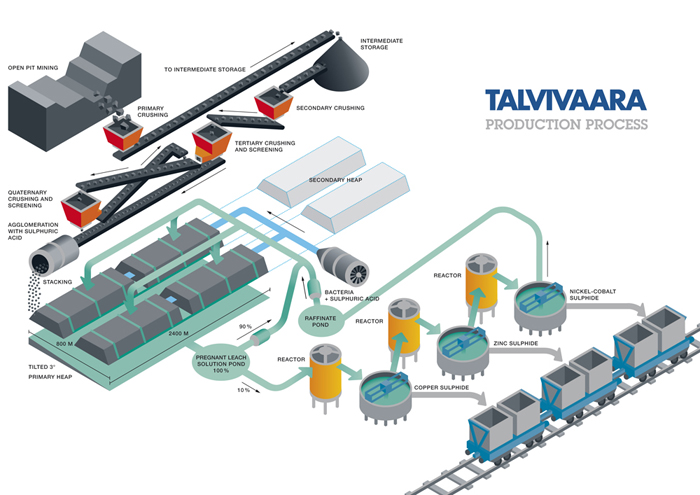 Once inside the ore, the bacteria begin eating away at it, bit by bit.

After the ore is eaten away, chemical wastes released by the bacteria liquefy the remaining metal...

The resulting solution is then collected in a pond outside the heap and sent to a plant where the metals are recovered.

Afterward, the solution is recycled and sent back to the heap, where the process can begin all over again.

(And remember, as the bacteria consume the ore, they also consume the carbon within it — meaning no CO2 emissions!)

So How Did Things Work Out for Talvivaara?

Well, once the mine was set up, production began in October 2008 — and it hasn't stopped expanding since.

In fact, the entire operation is such a success that Talvivaara is right on schedule to reach its annual nickel production of 50,000 tons by next year. It also expects to produce 90,000 tons of zinc, 15,000 tons of copper, and 1,800 tons of cobalt each year...

And in 2010, it announced production of 350 annual tons of uranium as a byproduct from its other metals — enough for all of Finland's nuclear energy needs.

Not only that, it also just signed a 10-year contract with Norilsk Nickel, the largest producer in the world, to sell its entire production.

The best part is if just one of these metals is extracted... if only a little bit of it is recovered... this would still be more than enough to launch this explorer into orbit.

But as with most great opportunities these days, you must act quickly if you want to take advantage of this Canadian Super-Mine and the mining outfit that stands to explode in share price as they bring it to market...