New Oil Is More Important Than Ever

The oil bull market is still alive and kicking, despite the bearish sentiment.

Keep in mind that today’s glutted market conditions aren’t the norm, and they are certainly not the end of the oil industry, as doomsaying media claims.

Now is not the time for producers to slack off in searching for new supply.

We may have more oil than we need for the moment, but today’s low prices could be tomorrow’s supply shortage if we let this situation go too far...

It seems pretty obvious: When you make less, you spend less.

That’s true of everyone, from the everyday shopper to a multinational conglomerate.

Oil producers are no different. As oil prices have slid from historic highs back in 2014 to budget-breaking lows last year, companies have cut costs as much as possible.

It’s been easier for some than others...

U.S. shale players have been able to make drilling new wells millions of dollars cheaper than it was just a few years ago. Crude from these plays is also lighter, and it's cheaper to refine. 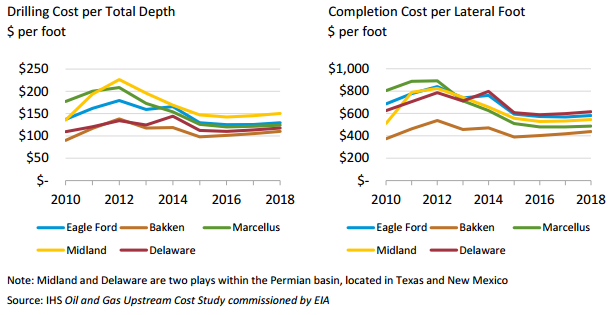 But outside the U.S., where production is still as expensive as ever, exploration and development take the hits instead.

Even if we had an extra billion barrels a day right now, we could be running dry in a few short years.

At this rate, that’s exactly where we’re headed.

Oil discoveries are at an all-time low, and we’re depleting existing plays by the hour. The world’s consumption of 98 million barrels a day is a tall order, and growing!

What that leaves us with now is a low price glut... and a future without recoverable oil supplies.

I’ve been in this industry long enough to recognize this kind of impending problem when I see it.

And you’d better believe I’m setting us both up for success when it hits.

Ahead of the Game

If you don’t believe me, just take a look at the budget of the world’s largest oil major.

Saudi Aramco has plans to spend as much as $334 billion between now and 2025, much of which will be going toward exploration and development of unconventional oil resources, according to senior Aramco official Abdulaziz al-Abdulkarim.

This is coming from the company that has unfettered, exclusive access to the largest conventional oil field in the world, Saudi Arabia’s mammoth Ghawar.

When will the oil profits come back from war?

No one can really agree on that point, but Saudi Aramco intends to be ready when it happens.

Of course, I’m not condoning investment in anything that has to do with OPEC. The oil cartel is slated to collapse any day now.

Besides, there are better opportunities much closer to home...

The Bakken of Mexico

Last week, Christian DeHaemer finally released his research on an oil play that could do for Mexico what the Bakken did for the U.S.!

(Hint: That was the start of our insanely profitable shale revolution.)

Since the moment he told me about it, I’ve been biting my nails, waiting for the news to break.

Now, the time has come. It all goes down on Friday, dear readers.

Just think: This new play could have as much as $490 billion in proven reserves. That's just based on today's low prices, which won't be around forever.

And thanks to Christian’s research, we know which company is getting first crack at that supply.

It may seem like now is the worst possible time to be bringing a new oil operation online, but really, there couldn’t be a more perfect situation.

Old fields are dying out. Existing fields are getting more expensive to run.

This new oil play — actually, an old field secreted away until now — is the key to much-needed future oil supply.

You can get all the information you need on this monumental opportunity right here.

Four Days to the Mexican Oil Auction
Energy and Capital editor Christian DeHaemer tells you why you should buy Mexican oil now before the next round of auctions this Friday...
Is Oil Actually in a Bear Market?
Energy and Capital editor Christian DeHaemer explains why oil is heading up... not down.
Biggest Oil Boom Since 2001
Energy and Capital editor Christian DeHaemer gives you the straight dope on oil prices (from the past and for the future) and big American cars...
Hydrogen Fuel Cells: The Downfall of Tesla?
Lithium has been the front-runner in the battery technology market for years, but that is all coming to an end. Elon Musk is against them, but Jeff Bezos is investing heavily in them. Hydrogen Fuel Cells will turn the battery market upside down and we've discovered the tiny company that is going to make it happen.