Ninety years ago, a letter was delivered to the State Land Office in New Mexico.

It was the first of its kind, and rumor has it that more than a few employees in the office that day were baffled by its arrival. After the envelope was passed around, someone finally decided to open it.

This was the first royalty check paid out to the state for an oil well that was drilled there earlier in the year. The check had been carefully written out by the three men behind a partnership called "Illinois Producers."

Chances are good that you've never heard of Tom Flynn, Martin Yates, or Van Welch before today. You won't find them among the famous oilmen in school textbooks, nor will you find their names adorning plaques alongside the oil magnates of old — men like John Rockefeller or Edwin Drake.

Back in 1924, those three oil pioneers were responsible for drilling the first commercial oil well in New Mexico... and you won't find a more unusual story than the one behind this historic well.

After the trio twice failed to strike black gold, they were unable to make up their minds on where to drill the third well.

The ultimate fate of the well's location was decided by Martin Yates' wife. They hopped inside a Model T Ford and drove until she told them to stop.

Soon enough, the men began drilling and hit pay dirt at a depth of just under 2,000 feet.

Less than 13 years after the men drilled that well, over a dozen oil fields had been identified, and more than 1,700 wells were extracting oil and gas resources from underground.

By 2007, the state had produced in excess of 65 million barrels of black gold — but that was just the beginning.

Since then, there has been a quiet oil boom raging across the state, and New Mexico has climbed its way up the ladder to become the fifth-largest oil-producing state in the country.

You may not see the Land of Enchantment's name plastered across media headlines as much as the more prominent shale plays in the Lower 48, but that may be because New Mexico oil producers are just getting warmed up.

During the last six years, the state's oil production has almost doubled:

That's the highest the production has been in over three decades — and it all happened within a few short years.

To put some more perspective on it, consider that during the same period, California's oil production has fallen by about 6%, and Alaska's output has plummeted by nearly 25%.

If this continues, is it only a matter of time before New Mexico overtakes Alaska — an unthinkable concept 10 years ago.

Let me take a quick step back and show you why investors in the U.S. oil boom are among the most bullish out there...

Over the next year and a half, the United States will account for the lion's share of oil and liquids production growth by non-OPEC countries.

Don't take my word for it; you can see it for yourself below: 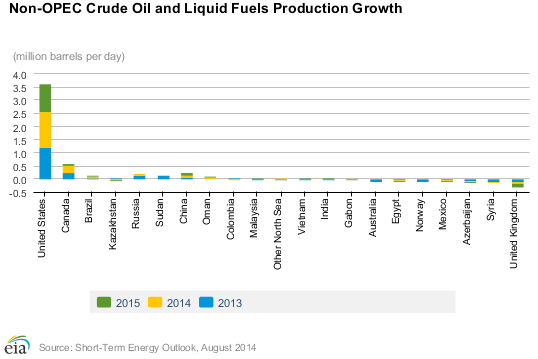 And herein lies the rub...

Unfortunately, you won't hear about New Mexico's oil boom — not while the spotlight is fixated on the three shale plays pumping out well over a million barrels per day each (or while half of the United States' daily output is produced from just two states, for that matter!).

This is also on top of the fact that New Mexico simply doesn't have the infrastructure in place to support the kind of growth we've come to expect in the U.S. shale boom.

Earlier this year, Encana Corp. announced it was spending up to $350 million drilling into potential blockbuster plays like the Mancos Shale, found in the northwestern part of the state.

It just so happens that New Mexico shares a part of the Permian Basin with its eastern neighbor — one of the most prolific oil-producing areas in U.S. history.

Every other play seems to be taking a backseat to the Permian Basin, where almost 600 rigs are furiously drilling into the Texas soil.

All the major players are increasing their activity there: ExxonMobil, Occidental Petroleum, and Chevron, to name a few. In fact, roughly $12 billion is being doled out this year by E&P companies in the Permian Basin.

Yet despite the fact that these mammoth companies are scrambling to increase their exposure to West Texas, individual investors do have better options available — including this $1 undervalued oil gem drilling in the thick of the Permian Basin.