Developing a Wealth of Natural Gas

Understandably, I'm not usually one to have a row with one of my readers; but when their hard-earned money is on the line, nothing is out of bounds for me.

The problem was that this poor soul was a hopeless romantic. For hours, he ranted and raved about wind energy.

First it was the great revitalization that would happen in rural economies... Then he dazzled his own mind with the thought free fuel, stabilizing electricity prices, creating jobs. 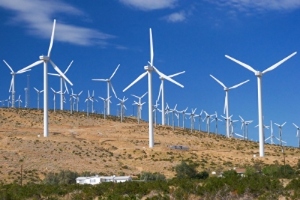 His lecture went even further, explaining how wind was the perfect source of energy. From a cleaner environmental footprint... the lack of mining and transportation like the “filthy” oil sands... and finally, how we'll be preserving countless acres of land.

Believe me, he went on and on like the Energizer Bunny. And on and on... You get the drift.

In fact he was so focused on the development of wind energy; he even made a point to say how profitable wind stocks were.

That part I had to concede. My colleague Nick Hodge has been making a killing on wind stocks for years. He mused how easily his readers just banked 26% from one wind company.

When I pressed him on it later, he went on to tell me about three wind stocks that could double by the end of the year.

So it was an open-and-shut case, right?

Reality blowing in the wind

It's not that I don't like the idea behind wind energy.

On paper, it sounds great.

For example, when the gentleman excitedly told me that wind energy was growing at a tremendous rate, I knew he had lost perspective on his investment.

This would certainly explain the generous profits to be made in the wind stocks, he (and many wind investors) failed to take into account a very important factor.

I want you to look at something. Below, I've let the EIA break down our total energy consumption by source:

Obviously, oil's grip over our energy picture is stronger than ever. Also notice that our consumption of wind energy jumped 196% during that time — more than any other source of energy.

The reality, however, is that wind makes up a dismal amount of the overall picture.

Fifty or sixty years down the road, you might have me convinced. But by then, we will have already transitioned away from oil with another energy resource.

And I'll tell you right now that it's just as clean as wind — and more profitable.

One thing that will put aside the development of wind energy is natural gas.

And in the U.S., there's no better opportunity to take advantage than right now.

It makes perfect sense, too.

For starters, we have the supply. This should be overwhelmingly evident.

After the first shale gas explosion (no, not in the BP sense of the word), we began to realize how abundant our resources were. Soon after the success in the Barnett shale, several other massive shale formations were tapped.

Earlier this year, I explained why these U.S. shale basins will be a game-changer. At the time, I only used four as an example. As you know, there are several other extremely profitable plays in both the U.S. and Canada.

Also, we have the infrastructure in place. The network of pipelines across the U.S. has kept the natural flowing.

And right now it's incredibly cheap.

When energy demand collapsed along with the housing market, oil and gas prices took a beating. Crude oil collapsed to $33 per barrel in December 2008; natural gas tumbled below $3 per Mcf.

But when oil prices rallied in 2009, natural gas prices remained stagnant — mostly due to the oversupply.

In the last year, natural gas prices have remained cheap: 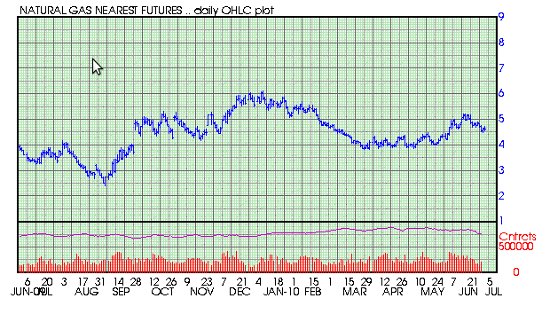 Natural gas isn't going to stay this low forever, especially when demand is finally picking back up.

Furthermore, when the U.S. finally makes the transition away from oil, we will be forced to account for even more demand — and you can count on peak oil to facilitate that change.

When I first started investing in natural gas stocks, there was one mantra that quickly adopted: Always buy during the summer months and sell during the winter months. Seasonally, that's when natural gas is at its peak.

And if you haven't noticed it yet, our future in natural gas hinges on developing these shale plays.

One area in particular has a head start.

This free report lays it all out for you — including three plays that stand to double on a natural gas recovery.

Oil's Last Buying Opportunity
Energy and Capital Editor Keith Kohl explains why the fears over an upcoming market collapse could make you a small fortune.
Natural Gas Stocks: Back in Play?
Energy and Capital Editor Keith Kohl explores three natural gas stocks for investors to play on a recovery.
Natural Gas Emerging as Oil Alternative
Energy & Capital Editor Nick Hodge calls for natural gas to corner several niches of the energy market, including new baseload generation and fleet vehicles.
Is Natural Gas the Future of Energy?
Energy & Capital Editor Nick Hodge takes a look at the zero-sum oil game in the U.S. and reports that natural gas is about to be ushered in as the new fuel of choice.
Hydrogen Fuel Cells: The Downfall of Tesla?
Lithium has been the front-runner in the battery technology market for years, but that is all coming to an end. Elon Musk is against them, but Jeff Bezos is investing heavily in them. Hydrogen Fuel Cells will turn the battery market upside down and we've discovered the tiny company that is going to make it happen.