A Stunning Reversal of Fortune

The other night I was having a conversation with one of Angel's founding members, Bill Lowe.

Bill was born and raised in Maryland, near the Eastern Shore. Bill is an avid outdoorsman. He now lives in Montana, an outdoorsman's paradise.

He was telling me a funny story about how a girlfriend of his broke up with him several years ago. Bill came in from work one evening, and his girlfriend Lilith was sitting at the kitchen table, waiting for him. She said that they needed to talk...

She started off their conversation by pointing to a bunch of fishing rods Bill had leaned in the corner of the room.

Lilith said, "I think sometimes you care more about those fishing rods than you do me."

Bill calmly replied, "You're dead wrong, honey. It's all of the time."

Anyway, from time to time, Bill comes back to Maryland to fish in the Chesapeake Bay. And the other night he was recalling a fishing trip he took seven years ago, in 2005.

But instead of telling me about the Rock Fish he'd caught, Bill was telling me how shocked he was at how drastically things in the energy market have changed in those seven years.

You see, he was fishing around Lusby, Maryland, home of the Dominion Cove Point LNG (liquefied natural gas) plant...

Let me give you some background here...

When Bill floated past the Cove Point LNG terminal, natural gas prices were in a parabolic rise. 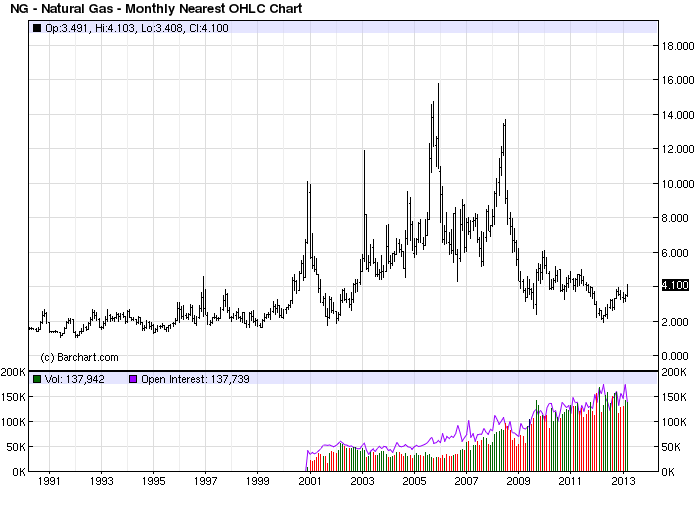 It was a crisis. And Cove Point was going to be instrumental in alleviating the crisis by importing more LNG, a position it's been in before.

In the 1970s the Consolidated Natural Gas Company, parent of what is now Dominion Transmission, partnered with the Columbia Gas System. Together they built Cove Point to import liquefied natural gas from Algeria. Cove Point imported LNG from 1978 to 1980.

However, increased natural gas production in the United States in the 1980s reduced the need for LNG imports, which were more expensive relative to the new domestic gas supplies.

Growing national demand for natural gas — fueled in part by the increasing use of natural gas-fired electrical generation stations — once again required increased imports of LNG, and Dominion Cove Point received its first LNG shipment in the summer of 2003.

But things have changed dramatically since...

In January of this year, Dominion received approval to proceed with the building of a new facility at Cove Point.

In its press release, Dominion said:

Dominion has entered the Federal Energy Regulatory Commission's pre-filing process in anticipation of filing an application in 2013. Engineering studies are continuing and are expected to be completed soon. Terminal services agreements are under negotiation with potential customers, including Sumitomo Corporation, a major Japanese trading company.

Translation: Cove Point will be exporting LNG to other nations.

Read that again, dear reader: The United States will be exporting gas.

Thanks to the miracle of fracking, America finds itself in a unique position that most nations envy: We are swimming in so much natural gas, our energy costs are some of the lowest in the world.

And remember what the ex-boss of BP said last year — that America's shale gas reserves are so huge, our supply is "effectively infinite."

Cove Point is just one example of America's energy rebirth...

This week, Great Britain signed a 20-year deal to import American LNG. Gas imported from the U.S. will heat as many as 1.8 million British homes under a $10 billion supply deal between Centrica and Cheniere Energy Partners in Louisiana.

This deal couldn't have come any sooner. Britain had a ban on fracking for years, but recently reversed the ban.

The results of the ban are visibly brutal: The country's gas reserves have plummeted to historic lows. Now the nation is experiencing a prolonged winter that has plunged gas reserves so much, heating bills have spiked to record highs...

It's so bad, British residents have resorted to turning off their heat completely because they can't afford it.

Uncle Sam will save our cousins across the pond again...

But instead of sending military supplies and troops, we'll be sending them the champagne of fuel: natural gas.