There hasn't been much cheer in natural gas lately.

In fact, I distinctly remember the warning a friend gave me several weeks back: "Natural gas? Avoid it like the plague."

That's probably the worst bit of advice I've ever been given, but I'll get to that in a minute.

To be honest, I can't blame him for his sour outlook. After all, he's still feeling the sting from a year ago.

Not surprisingly, natural gas prices collapsed right alongside everything else. But while many commodities have managed to rebound in 2009 (crude oil, for example, is starting to move back to $70 per barrel again), natural gas has continued to fall.

As it turned out, last year's consumption nearly reached record levels. We used up 23.2 Tcf of natural gas in the U.S. last year (the record was 23.3 Tcf, set back in 2000). Once everything hit the fan in the latter half of 2008, demand simply collapsed. 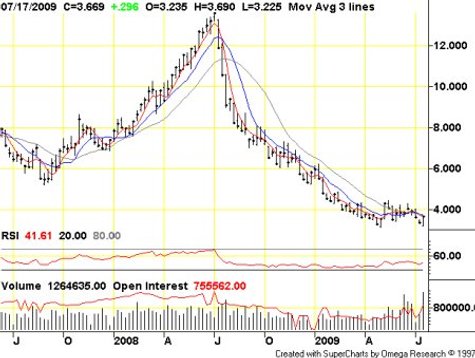 Clearly it's been a downhill ride so far this year. And there's just no reason for investors to get excited. . .

It shouldn't come as a surprise that natural gas prices haven't made a comeback yet. If anything, prices now feel like they're stuck in rut below $4.00/Mcf.

However, I would be a little concerned if natural gas prices began rising in the middle of July, which is typically when they are at their lowest. Last week, the Energy Department reported an inventory increase of 90 Bcf, raising supplies to 2.9 Tcf.

Now factor in the lower demand, also. Natural gas for electric generation — which made up almost one-third of the U.S. electric power generation in 2008 — dropped 13% in the first quarter of 2009. When the economy finally gets back on track (and it will, eventually), demand from factories will pick back up.

Along with an economic recovery projected for early 2010, we'll also be in the full swing of winter. And depending on how soon the cold weather begins to move in, people will begin flipping on the heat.

It's nearly impossible to mention natural gas production without giving a nod to the unconventional shale plays that have sprung up over the last few years.

The problem, however, is that the price collapse has had a detrimental effect, forcing drillers to slash budgets. You see, the supply glut we saw from unconventional production is disappearing. And every day natural gas prices remain this low, they put more stress on a future crunch.

To put it simply, dear reader, natural gas prices are not sustainable at this level. I don't believe investors realize how undervalued natural gas is right now.

Without this unconventional production, meeting an increase in future demand will be next to impossible — even more so when you take a future decline in imports into account. And most of you already know how I feel about liquefied natural gas. With such an abundant amount of natural gas in these shale plays, there's no reason to look for foreign imports to meet demand.

Granted, it may take a few months for natural gas prices to pick up, but there's no reason you can't be ready for it when they do.

Understandably, one of the simplest ways to get back into natural gas is through an ETF. If natural gas prices have truly bottomed out (or will soon), the United States Natural Gas Fund (NYSE: UNG) is the best way to cash in on rebounding prices.

The next two ways are taking advantage of those unconventional gems.

EOG Resources (NYSE: EOG), for example, is a company I've mentioned several times in the past. These guys have a stake in almost all of the unconventional basins I've been looking at, and probably some I don't know about. As one of the largest independent oil and natural gas companies in the U.S., EOG has approximately 8 Tcf of natural gas reserves under its belt.

Finally, I would keep my eye on Range Resources (NYSE: RRC). If I'm looking to invest my hard-earned money into an unconventional play, it had better be able to come through with production.

Range is currently on its 26th consecutive quarter of production growth, which is impressive considering how hard the industry has been hit during this recession. Not only is production 14% higher than a year ago, when natural gas prices peaked, but Rang also managed to exceed their production guidance of 420-425 Mmcfe/day.

Personally, I can't think of a better opportunity for investors. We could begin to see a rebound for prices in as early as a few months. And like I said earlier, natural gas simply cannot stay this low without exacerbating a future supply crunch. Hopefully you won't be left out in the cold this time around.

Editor's Note: My readers know there's not one "silver bullet" when it comes to answering our energy problems. Natural gas is certainly going to play more than just a bit part. But we've also got our targets on the quickly developing renewables market. In fact, we've honed in on one breakthrough wind energy play... one that actually pays you when oil goes up! Learn more about it in this new report.