The Hidden Value of Our Shale Gas Boom

We've been watching this energy shift for years.

It's been billed as a showdown between two top contenders — though lately, it seems the scales are tipping in natural gas' favor.

Understandably, not everyone is convinced of the bullish case for natural gas.

But as I've explained in the past, there will only be one clear winner in the energy arms race.

Today I'll tell you why.

The transition away from coal is inevitable. It may take decades, but it will transpire.

The latest data from the EIA serves to support this claim:

You can clearly see the shift in the chart above from a report released yesterday.

During the first two quarters of 2012, 165 new power generators were added to the mix; of those, about 80% were geared toward natural gas or renewable sources.

Last year we saw this trend firsthand, with more natural-gas fired plants coming online than any other.

Most of these plants are much younger (10 years or less) than the coal-fueled plants in this country — three-quarters of which are more than thirty years old.

More to the point, nearly half of our country's entire electric generating capacity is more than three decades old...

So, which will it be: natural gas or wind?

That's almost too easy to predict, considering natural gas has one serious advantage over wind. With 2.2. million miles of pipelines criss-crossing the United States, the infrastructure is already in place for the eventual natural gas takeover.

Perhaps it's time you take advantage of the investment opportunity here, because this bull won't stay quiet much longer...

Top Spot for the Marcellus?

Five years have passed since we first broke through the Barnett Shale.

Before that happened, this formation wasn't even a blip on investors' radar.

It quickly came to be considered one of the largest onshore natural gas fields in the U.S. And it was only a matter of time before another top shale play overtook the Barnett...

During the first quarter of 2011, the Haynesville became the highest-producing shale gas play in North America.

Unfortunately, natural gas prices have since collapsed from record highs: 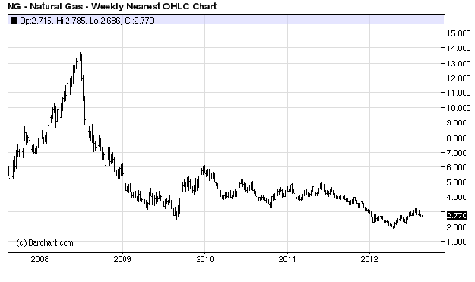 Very soon there'll be a new leader — the Marcellus Formation — where production has more than doubled over the last twelve months to 7.4 billion cubic feet per day.

﻿Take another look at the graph above showing electric capacity additions.

Notice that the states adding the most natural gas-fueled capacity are located in the Eastern U.S.?

This isn't a coincidence, and the wild success in the Marcellus Shale is a major factor in their switch.

Meanwhile, production in the Haynesville has been steadily dropping since last October.

This leaves the door wide open for Marcellus players (and this in spite of the Pennsylvania Dept. of Environmental Production recently reporting a decline in new shale gas permits).

How long can the Marcellus stay on top? Longer than you might think...

Marcellus operators already have a clear edge over their Haynesville rivals in that the cost to drill a single well can run between $3.5 and $5 million. In the Haynesville, that expense runs up to $10 million.

We should also factor in the the close proximity Marcellus drillers have to the liquids-rich Utica Shale in Ohio.

Even though major oil companies like Exxon and Chevron have spent billions buying their own piece of the shale gas boom over the last few years, that doesn't necessarily make them the best.

But neither have performed nearly as well as smaller players like Rex Energy over the last three months: 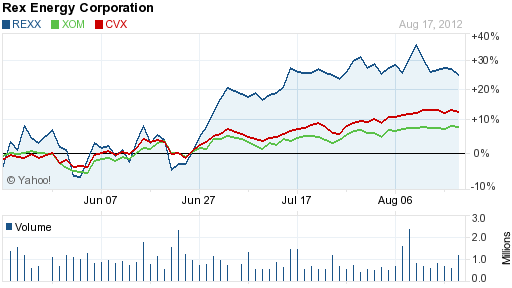 There's also a tiny detail most people overlook: the hidden investment gems in the coming natural gas bull market aren't tied up with production at all.

You'll find the real value comes from the companies that are paving the way for the upcoming natural gas takeover...

These stocks will flourish no matter how low natural gas prices drop.