A new photo was released by NASA showing a satellite image of the United States. The image is fascinating, showing a glowing nation with interconnecting highways.

The big cities, particularly along the East Coast, glowed brilliantly. In the Midwest, the nation grew darker, with bright spots spread sparingly.

For the most part, the light clusters in the image were no surprise; New York was a beacon, as were other major cities, and states like Maine were mainly dark.

That cluster was centered on northwestern North Dakota, and particularly around the town of Williston. By day and from Earth, Williston looks like any small town: 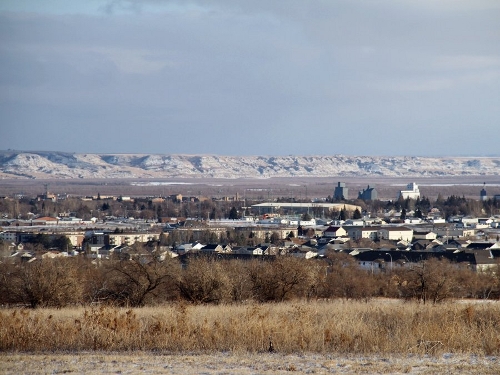 But by night, its lights could rival the bigger cities in the country: 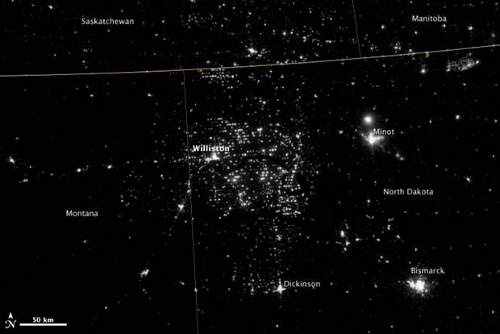 Source: The Globe and Mail

A closer look would show us that those lights aren't from new skyscrapers or a particularly dense area in a sparsely populated state. They're not even all lights focused on North Dakota's abundant oil and gas fields, though that guess would be closer.

No, the lights are actually from flare stacks. And they're burning off valuable natural gas constantly.

Gas flaring has been occurring more in the U.S. within the past several years as natural gas production from the shale boom began to outpace infrastructure development. While railways are available to ship some of the gas, pipelines that would be able to move it in higher quantities call for permits, contracts, and construction time.

Williston, North Dakota is the hub for the Bakken shale – one of the most productive shale oil and gas formations in the United States. Pipelines are under construction in the region, but very few are currently operating.

ONEOK Partners' (NYSE: OKS) 525-mile natural gas liquids pipeline is currently under construction. The pipeline is planned to be online this year, moving NGLs to Colorado.

The Tioga pipeline, capable of shipping 106,500 million cubic feet per day to Chicago, is also expected to be complete this year. The pipeline is owned by Alliance Pipeline, a limited partnership between Enbridge Inc. (TSX: ENB) and Veresen Inc. (TSX: VSN).

But that's not soon enough or enough capacity to stop the flaring taking place there. According to the Financial Times, oil companies globally have reduced flaring by 20% between 2005 and 2010. But last year alone, North Dakota's flaring grew by 50%.

Overall, roughly 30% of the gas produced in North Dakota is flared on site. And the percentage has stayed stubbornly the same despite the region's constantly increasing production level.

It all comes down to infrastructure; the oil and gas companies just do not have the means to move their natural gas. But they're also losing money by flaring it, and the world is losing the additional resources.

From the Financial Times:

“The situation in the shale oilfields is similar to the early days of the U.S. oil industry,” said Adam Brandt, a Stanford academic who studies greenhouse gas emissions from fossil fuels.

“Companies are in a race with their competitors to develop the resource, which means there is little incentive to delay production to reduce flaring.”

But this could all change soon, beginning with a move by officials in North Dakota. The House Taxation and Finance Committee is reviewing a bill that could encourage companies to collect more gas on site.

Under current rules, gas companies are exempt from paying royalties and taxes on flared gas for the first year. But if this new bill passes, the Jamestown Sun reports, this would be extended to three years, with one condition: the company must collect 75% of the gas it produces on site.

New technologies are emerging to enable companies to gather more gas on site and put it to use; the biggest of these, perhaps, is the use of gas in place of diesel to power fracking pumps.

Companies like Apache Corp. (NYSE: APA), in cooperation with Halliburton Co. (NYSE: HAL), Schlumberger Ltd. (NYSE: SLB), and Caterpillar Inc. (NYSE: CAT) are working to develop and make use of this technology, Yahoo! News reports. PGE is converting a pump to run on a blend of natural gas and diesel.

These technologies will continue to emerge as the shale boom expands. Not only do they reduce the pollution and resources lost in the process, but they also significantly reduce the costs for the companies using them.

When natural gas is flared, it's wasted; no one can use it, and the money and manpower spent extracting it was for naught. But these developing technologies will reduce this waste while increasing the efficiency of gas extraction.