Waste Not, Want Not

In 2012, an image was released of what appeared to be a cluster of constellations in the night sky.

They were photographed over the course of several weeks by the Suomi NPP, a weather satellite that was launched from Vandenberg Air Force Base in California in 2011. 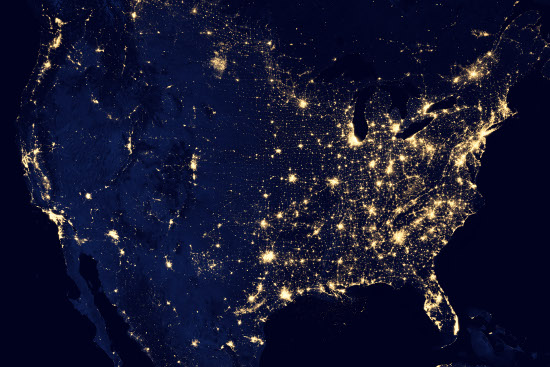 However, before I could start connecting the dots and map out one of the 88 constellations that cover the night sky, it quickly dawned on me that it wasn't a pattern of stars at all.

According to NASA, what the picture showed was the glow of both natural and human-built phenomena.

More telling, however, was that it highlighted another, less attractive part of the U.S. oil boom: natural gas flaring.

You've undoubtedly heard this term before, as it simply refers to gas burned off at production sites or at gas processing plants.

That's right — part of what these Suomi NPP images showed was the light from millions of cubic feet of natural gas being burned off, illuminating the Williston Basin brighter than some of America's largest cities.

Something else was being burnt to a crisp as well: more than $1.2 billion of cold, hard cash.

Waste Not, Want Not

In recent years, more than one-third of the natural gas produced in North Dakota has been flared off. In 2013, 102.8 billion cubic feet of natural gas was vented or flared in the state, accounting for almost 40% of the total amount within the United States.

It comes out to a staggering value — an estimated $100 million per month.

More importantly, this issue is only getting worse as time goes on, especially if companies continue increasing tight oil production from the Bakken/Three Forks area:

Not only are people starting to take notice, but it turns out that a veritable fortune will be generated from solving this problem.

Let's be clear... nobody likes burning up $1.2 billion worth of anything.

I know it sounds a little hypocritical for the government to lecture anyone on waste, but one thing we can count on is for legislators to jump into the flaring fray.

Last year, we were given a sneak peek of what those regulations would look like — including limiting production from wells if gas capture doesn't reach a certain amount. A recent Senate bill would even reduce the period of time a well can flare — from one year down to three months.

And with the issue starting to gain more attention in the media spotlight, the gas flaring debate in North Dakota won't fade.

The simple answer here is to reduce flaring.

In fact, the goal right now is to reduce natural gas flaring in North Dakota by up to 90% by 2020.

The problem, however, is the same one that has plagued North Dakota producers for the better part of a decade: a frustrating lack of infrastructure.

You see, part of the reason companies have been willing to burn off natural gas at the wellhead is because it is cheaper to burn than produce. Unlike Texas, which has a tremendous amount of infrastructure in place to transport and process natural gas, North Dakota is shockingly deficient in that department.

Even now, we're seeing major oil companies step up to address the flaring issue. Last September, Statoil announced a joint venture with GE and Ferus Natural Gas Fuels to capture flare gas and use it to fuel half a dozen rigs and a hydraulic fracturing fleet.

This is peanuts compared to the gas flaring fortune that another Bakken player is about to inherit.

Once its new project is complete, it will have the ability to capture nearly three-and-a-half times the amount of natural gas that is currently being flared.

What's more, this ensures that oil producers will be able to continue ramping up production in the Williston Basin without further governmental red tape.

Keep an eye on your email inbox, because I'll reveal the company that will inherit this North Dakota flaring fortune on Thursday.