Take a look at this image: 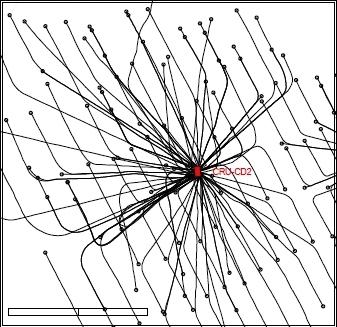 What do you see?

I showed this to a number of my colleagues in the office and asked them the same question...

The answers ranged from a chaos theory calculation to a computer simulation of a storm path to an electric circuit design.

Actually, it's a real-life graphic of the next energy revolution hitting the United States.

I call it "the Octopus" because of its many tentacles that extend from the core body.

Others call it multi-well pad drilling.

I wrote about the Octopus a few weeks ago. But I think you should know that the American oil and gas boom is about to undergo another tectonic shift that will firmly plant it as the number one source of energy in the world.

Before I go into that, let me tell you about a little town in northwestern Colorado called Parachute...

Parachute is tiny, only 1.2 square miles in size, but it's a giant in the oil and gas industry thanks to recent drilling achievements.

You see, Parachute sits on top of the Piceance Shale Formation. The Piceance is part of the lower Green River Basin. It's one of the richest oil and gas shale deposits on the planet, with an estimated 1.5 trillion barrels of in-place oil shale resource.

We've known about this oil resource for many years, just as the Bakken has been known about for decades.

But in April 2009, the U.S. Geological Survey updated its assessment of in-place oil shale resources in the Piceance Basin. This new assessment came in about 50% larger than the 1989 assessment of about one trillion barrels.

Almost all of this increase is due to assessments of new geographic areas and subsurface zones that had too little data for previous research and assessments.

"For the first time in 20 years, we have an updated assessment of in-place oil shale in the Piceance Basin of Colorado," said U.S. Secretary of the Interior Ken Salazar.

Excitement has been building in Piceance as many drillers have been operating there for the past few years. There's so much natural gas there, it's been dubbed "The Gas Factory."

I told you in a previous article that historically, a driller was capable of drilling only one well per well pad...

But what has happened in Parachute is a game-changer.

One company hit pay dirt with a technological advancement that promises to propel the U.S. to energy superstar status.

Think about this... Encana's pad site is 4.6 acres in size above surface. However, using its multi-well pad drilling technology, it was able to access a full square mile of underground resource.

Apart from the pad site, the entire canyon remains green and untouched as if nothing is going on — but the company will drill more gas from this site than it ever has from any previous well pad.

That's just one drilling site. With the Octopus, multiple buried wells can be accessed.

Once it was proven how powerful this technology is, major oil producers began quietly bypassing traditional drilling methods in favor of the Octopus. Last year, Devon Energy (NYSE: DVN) drilled 36 wells from a single pad site in the Marcellus.

The Octopus is quickly becoming the norm — and for good reason...

You see, the drilling tentacles of the Octopus can stretch in opposite directions and tap shale oil from north to south, east to west, at the same time — siphoning oil and gas at a quicker pace and even reaching oil that once seemed "impossible" to get.

These drilling tentacles can stretch out underground for miles under farms, prairies, airports, even towns, while the surface remains completely undisturbed.

This is a major breakthrough for the oil industry.

Energy engineers think its impact will dwarf the groundswell caused by hydraulic fracturing and horizontal drilling over the last 11 years...

And it will put millions of dollars in the pockets of investors who get in now to secure massive amounts of cash from soaring U.S. oil production as a direct result of this technology.

It's easy to see why.

Normally, for a company to drill just four wells using traditional horizontal drilling, it would need four different pads or land sites, each covering about 7 acres of land. That's a total of 28 acres of land needed for 4 wells.

The company drills one hole and then breaks down the rig and hauls it to the next location. The rig then has to be built again to start drilling the second hole, a process that takes no fewer than five days...

But the Octopus (or multi-well pad) allows for those same four wells (and as many as 18 wells, in fact) to be drilled from the one single site. So one pad equals between 4 and 18 wells.

Even more impressive: As many as 2,000 acres of shale reservoir can be tapped from one single drill pad on just 7 acres of land — and recover oil and gas 8x faster than traditional horizontal drilling.

How does it all work?

After the one well pad is established, the first well is drilled. Pretty standard stuff — but then the interesting part begins...

This process is repeated until all the wells on the pad are drilled in a period of just two hours time between each well.

It's quite a departure from the five days it used to take from well to well on separate pads with the traditional horizontal drilling.

It's only a short time before a given pad has multiple drills stretching in several locations below the ground, tapping more oil, increasing our production, and rattling the global energy industry upside down in favor of America as it chugs toward world oil dominance...

We'll be there profiting in the early stages of this revolution.