Most of us have fallen for the allure of Big Oil before, starstruck by companies like ExxonMobil.

Unfortunately, things are getting bad out there for the supermajors...

For starters, they're being shut out.

Fifty years ago, they had access to more than 85% world's oil reserves. Back in the 60s, National Oil Companies (NOCs) barely held on to the rest. Since then, the situation has completely flip-flopped.

You'd probably expect ExxonMobil — the world's largest publicly-traded oil and gas company — to be somewhere near the top...

Sadly, the company doesn't even crack the top 10: 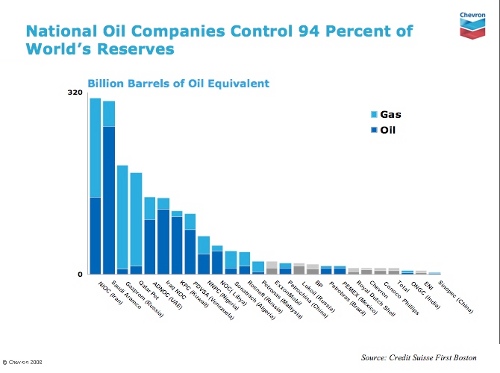 Last year, the company's brass boasted about having replaced 209% of production. They were even quicker to mention how the company is leading the industry in reserve replacement.

As with most things, the devil is in the details:

The corporation’s reserves additions in 2010, the highest since the merger of Exxon and Mobil, reflect strategic acquisitions, new developments, as well as revisions and extensions of existing fields resulting from drilling, studies and analysis of reservoir performance.

Did you catch that?

Without making huge acquisitions, these supermajors will soon be in serious trouble.

Remember, the company paid $40 billion in a deal to buy XTO Energy, which added 2.8 billion boe to their proved reserve base.

And it's not just Big Oil that's buying up the world's remaining oil and gas reserves. The NOCs, particularly from China, have been on a buying frenzy as of late.

They're certainly willing to spend the cash — whether it's the billion they throw at Chesapeake for a 33% stake in their operations, PetroChina's $5.4 billion bid for a part of Encana's gas and shale assets, or even Sinopec's $4.54 billion deal for ConocoPhillips' 9% stake in Syncrude, the largest producer in the Canadian oil sands...

The problem is countries now realize how valuable their oil and gas assets have become.

After a share swap deal between BP and Rosneft collapsed a few days earlier, Putin mentioned that Royal Dutch Shell is a “comfortable partner” to develop their Arctic oil and gas reserves.

I can't help but wonder if Shell feels the same way.

Back in 2006, Shell was basically forced to cede its controlling stake of its Sakhalin-2 operations — and that's putting things nicely.

It only took months of regulatory problems issued by Putin. Gazprom took control after dishing out $7.45 billion to Shell.

Of course, in Venezuela's case, they didn't even bother with the red tape. The May Day takeover ousted them in one fell swoop. So far, it hasn't worked out well for Chavez, who's facing an energy crisis of his own...

Let the Orphans and Widows Fight for Scraps

There are reasons companies like ExxonMobil are considered widow-and-orphan stocks.

They can draw a good deal of attention from name recognition alone, that's for sure. ExxonMobil has a market cap topping $400 billion and is operating all over the world.

But perhaps we're being too hard on the big guys. We'll certainly give them credit for continually raising their dividends, despite the massive crash in oil and gas prices during 2008:

Despite that small consolation, we know there's a better way to invest in energy.

Two years ago, when we said that our money is better spent elsewhere, we weren't kidding.

In fact just a few weeks later, we talked about several other oil and gas opportunities — including a basket of up-and-coming North Dakota drillers.

How did the world's largest oil companies perform compared to the smaller Bakken plays? As you can see, it wasn't even close...

I'll let you decide whether I'm treating the supermajors unfairly...

Now imagine how much that gap stands to widen over the coming years, as NOCs continue squeezing Big Oil out of their projects.

That's why companies like ExxonMobil will be shelling out top dollar for small energy firms drilling in the right place — or in this case, the single largest natural gas field in the United States.

Obama's Offshore Betting Slip
Editor Keith Kohl gives readers four offshore stocks that will profit from Obama's offshore legislation.
Weekend: Canada's Shale Fever Grows
Energy and Capital Editor Keith Kohl reveals one of Canada's best and most profitable energy secrets.
Energy Independence or OPEC Enslavement?
Where will we turn for help as the U.S. government plans to rid us of our nasty OPEC addiction?
Venezuela's Investment Crisis
Editor Keith Kohl delves into the latest Venezuelan oil crisis, and explains why Chavez's fiery rhetoric is falling on deaf ears.
Hydrogen Fuel Cells: The Downfall of Tesla?
Lithium has been the front-runner in the battery technology market for years, but that is all coming to an end. Elon Musk is against them, but Jeff Bezos is investing heavily in them. Hydrogen Fuel Cells will turn the battery market upside down and we've discovered the tiny company that is going to make it happen.