The commodity boom in Mongolia is just getting started. Vast fortunes will be made. Yours could be one of them. . .

Untouched for 19 years, the world's last great energy, metal, and mineral boom is about to launch in Mongolia. In fact it's already happening. A new tax law has recently changed the business climate, and the likes of Goldman Sachs, China Wealth Fund, Rio Tinto, and many other big players are rushing through the gates. . .

For the better part of a century, Mongolia has been known for its wealth of minerals: gold, coal, rare earth metals. Heck, the Russians had the whole place mapped out in the 1960s.

But under Russia, very little extraction ever took place. In the early 1990s, Mongolia finally broke free from its status as a Soviet puppet state and the country reacted like many former Russian states: It whipsawed from corrupt renegade capitalism back to its former communist party rulers and a collective mentality.

But neither of these systems was conducive to the massive capital inflows necessary to fund long-term gold, copper, and coal mines.

And as a result, during the commodity boom era of the 2000s, Mongolia was taken over by the anti-capitalists and strict laws were made placing punitive taxes on foreign companies after Mongolia's mineral wealth.

Then last year, the Moderate Social Democratic Party took power. This new group had a pragmatic approach to economics and political ideology. One of the first things those in power did was to cut the corporate tax from 68% to 30%. I bought one small gold miner in anticipation of this new law. . . 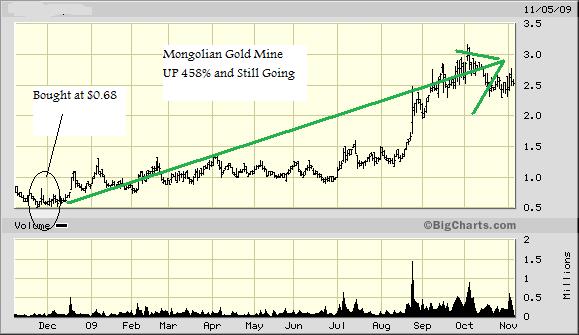 As you can see, the law passed in mid-August.

The first group to take advantage of the new law was Rio Tinto and its partners, who had been sitting on a concession for about 10 years. They reached an agreement with the government and are investing some $6 billion to build the world's largest gold mine within 100 miles of the Chinese border.

To give you some perspective, the square footage of this mining property is bigger than the state of Ohio. And the $6 billion investment — coupled with the expansion of the economy — will easily double Mongolia's $9 billion GDP.

As soon as the law passed, I started touching base with my contacts. I called James Passin, who runs the extremely successful Firebird Global Fund. James and I worked together for many years at the Taipan Publishing Group.

(You may have recently seen James' name in newspapers for hosting a fundraiser for former President Bill Clinton and the current Governor of Maryland, Martin O'Malley, at his New York brownstone.)

Name-dropping aside, knowing people on the ground is key.

In fact, over the past few years, Firebird has been buying up small companies in Mongolia in anticipation of the new gold rush.

The first thing James told me was that he owned a large portion of the largest broker in Ulaanbaatar who would be happy to show me around. He was also going to put me in touch with a national hero and wrestling champion who is very well-connected.

Mr. Passin's theory is that everyone knew about Rio Tinto (Market Cap: $89 billion). And yes, it might go up 50%. . . but the real money was going to be made in the banks, telecoms, and breweries — among others. The massive flood of liquidity taking over Mongolia (with a population of three million), would send fifteen-cent companies to five dollars almost overnight.

My friend's theory is hard to argue. My own research had given me the distinct feeling that Mongolia could be the Kuwait of Central Asia, with its oil, coal, gold, copper, uranium, rare earths. . .

The Rush Is On!

I'm not the only one who believes this. Just this week, China put up $700 million in a coal company.

The deal tops off a billion dollar spending spree by the group this week into the Mongolian mining sector. CIC also took a $500m stake in Canadian company SouthGobi Energy Resources in the form of a 30-year secured debenture issued by the company. SouthGobi also has coal mining interests and exploration assets in Mongolia.

And an Australian Company just sunk another $195 million into coal. According to its press release:

Leighton Holdings Ltd. (LEI.AU) said Wednesday that it has secured an upgrade worth A$195 million of a mining contract in Mongolia.

Australia's biggest construction company said Energy Resources LLC has asked its subsidiary Leighton Asia to expand the production capacity of the UHG Coal Mine in the South Gobi region of Mongolia. The adjustment increases the contract's value to A$480 million, Leighton said.

It's this type of market momentum that has me getting on a plane early Monday morning and flying 26 hours to Mongolia.

I will report my first impressions next week. The opportunities seem enormous, but you just can't run around half-cocked. . . There are reports to be read and people to talk to.

Look for the full report to be in your inbox on January 1, 2010. Truth be told, I'm not even worried about UB's temperature reached a chilly 13ºF at the high today — I haven't been this excited about an investment situation since the Russians were selling Gazprom for coupons.

And while the commodity boom in Mongolia is just taking off, we're already situated in the early stages of the greatest commodities bull market in history... one that my colleague Ian Cooper has been capitalizing on week after week. He's closed 93 winning trades with his resource and energy stock picks this year alone. To learn how his readers are enjoying gains of 3,124% since November. . . and how there's still time for you to get in before his next trade, just follow this link.

Meantime, stay tuned for news from on the ground,

Editor, Energy and Capital
(and soon-to-be-launched Crisis and Opportunity)

Clean Coal Technology
Energy and Capital Editor Keith Kohl gives readers the dirt on new clean coal technology and reveals two ways to profit.
China's Energy Revolution
Energy and Capital Editor Chris Nelder reviews China's buying spree of natural resources, and argues that we may need China for the energy revolution more desperately than anyone now imagines.
Gains for Oil and Gas Stocks Across the Board
Energy and Capital editor Keith Kohl reviews the week in energy and welcomes the sight of gain for oil and gas stocks.
Hydrogen Fuel Cells: The Downfall of Tesla?
Lithium has been the front-runner in the battery technology market for years, but that is all coming to an end. Elon Musk is against them, but Jeff Bezos is investing heavily in them. Hydrogen Fuel Cells will turn the battery market upside down and we've discovered the tiny company that is going to make it happen.