Mexico has a staggering amount of oil — roughly 13.87 billion barrels of proven oil reserves, according to state-run oil firm PEMEX.

But that's just the proven amount.

There are massive amounts of unexplored regions as well, and they're packed with probable oil.

Fracking, the same technology that is quickly turning the United States into the world's biggest producer of oil and natural gas, will soon transform Mexico as well. It could add as much as 460 trillion cubic feet of gas, and I've seen numbers stating that deepwater drilling in the Gulf of Mexico could add another 27 billion barrels of crude.

As if to back up this prediction, British Petroleum (NYSE: BP) just found a “significant” discovery 300 miles southwest of New Orleans. (The company won't say how big it is until it completes further drilling.)

According to the U.S. Energy Information Administration, Mexico possesses the biggest unexplored crude oil reserves just behind the Arctic Circle.

However, up until now, the nation’s charter has stated that this oil “belongs to the people.”

That means the drilling must be done by state oil producer PEMEX.

PEMEX is a woefully run company full of corruption and ineptitude. It simply doesn't have the wherewithal — or the technology — to produce this vast amount of oil.

Mexican oil production has fallen roughly 25% over the past few years. The country now pumps just 2.5 million barrels per day.

The old traditional wells are running dry... and almost unbelievably, Mexico is doing something about it.

Just last week, Mexico’s congress approved a change to the nation’s charter in order to allow foreign energy producers access to its oil fields. This change overturns a 75-year monopoly by PEMEX.

Under the terms of additional proposals, international producers will be offered production-sharing contracts or licenses, where they get to own the oil they pump from Mexico’s ground.

An influx of Mexican oil would contribute to a glut that is expected to lower the price of Brent crude, the benchmark for more than half the world’s crude that has averaged $108.62 a barrel this year, to as low as $88 a barrel in 2017, based on estimates from analysts in a Bloomberg survey. 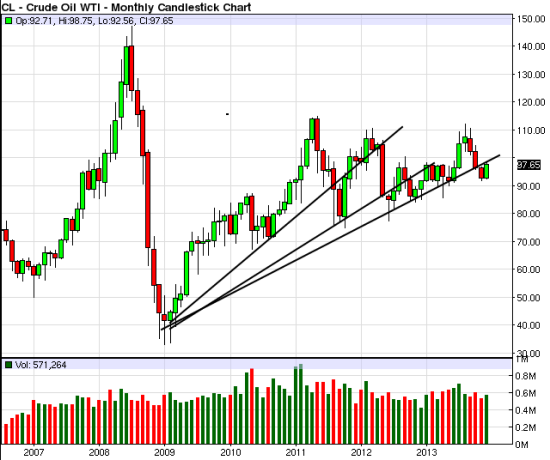 I don't know how the Bloomberg experts came up with their numbers (except by moving the goal 20%, as is standard with these guys), but judging by the chart, the price of oil is rolling over. The uptrend keeps getting broken.

Regardless, there are plenty of ways to play the coming Mexican oil boom. Those companies that build pipelines are a good example.

I'm doing my due diligence on a Mexican rolled steel producer. I'll get back to you on that one.