A Trip to Space and the Secular Bear Market

Yesterday was President's Day, a holiday celebrated by Wall Street and middle schools alike with a day off. Given this unique opportunity, I took my 12-year-old daughter to the Air and Space Museum on the Mall in Washington, D.C.

Air and Space is the most popular of all the Smithsonian museums, averaging 9 million visitors a year, which beats out the Louvre's 8.1 million.

My daughter touched the moon rock and saw the world’s first airplane, the 1903 Wright Flyer. Amazingly, it's not a reproduction but the real thing. It was given to the museum on the stipulation that it would be considered the world's first aircraft that exhibited self-propelled, controlled flight.

We saw the Spirit of St. Louis and a leather flight coat worn by Amelia Earhart. They had a V-2 bomb and the Soyuz Soviet space capsule, the moon lander and a prototype of the Mars rover Curiosity, and a whole room dedicated to the Space Shuttle program.

This was probably my daughter's sixth or seventh trip to the Air and Space Museum, having been pushed in strollers or carried along with her big sisters. But as they turned into teenagers, our museum trips diminished.

My youngest had not been in about five years and only remembered a few things, like the Elumenati — a three-dimensional projection globe with cool moving clouds.

Memories play tricks. Last week, I wrote about how it took the Nasdaq 15 years to return to its highs after the market crash of 2000. It took that long not only for a generation to forget, but also for a new crop of smarter-than-you young people to start investing.

On Wall Street, they call this phenomenon a secular stock market cycle.

The word "secular" originates from a series of Latin words that mean an extended period of time or an era. It’s even on the money. On the back of the one-dollar bill, to the left of the pyramid, it reads, “Novus ordo seclorum,” which means, “A new order for the ages.”

I generally think of a secular cycle as a generation, usually defined as 20 years, but in the stock market it is more like 12 to 17 years.

Just like I don’t have a memory of the moon landing, nor my daughter the Challenger disaster, so too does no 27-year-old have an investment memory of the 2008 crash.

In this way, and perhaps defined by what behaviorist B.F. Skinner called operant conditioning, investors are taught to react to sticks and carrots in the market.

This is the essence of market psychology. For example, in December of 2015, Bitcoin hit $19,650 a coin. The young set, those in their 20s, claimed that “this time it is different,” that Bitcoin would change the fundamental nature of currency.

At Angel Publishing, we had big arguments over crypto that was split between the young and the grey beards.

Those of us who remembered the same types of arguments regarding AOL and Yahoo foresaw the inevitable end. In my newsletter, Bull and Bust Report, my readers made 2,528% gains from Bitcoin and 1,040% from Ethereum because I had studied market bubbles and recognized the stages.

But not because I was a true believer.

As an aside, if you come across a cadre of young true believers in the early stages of a bubble, you should buy some. Just don’t be one yourself, or you’ll follow it all the way back down.

Warren Buffett is the world's most successful long-term investor. During the latest market drop in December 2018, Warren Buffett's Berkshire Hathaway didn’t buy many stocks, he sold more, and he hung onto his $100 million-plus cash portfolio.

This is because he ignores market psychology and buys based on logic and value. 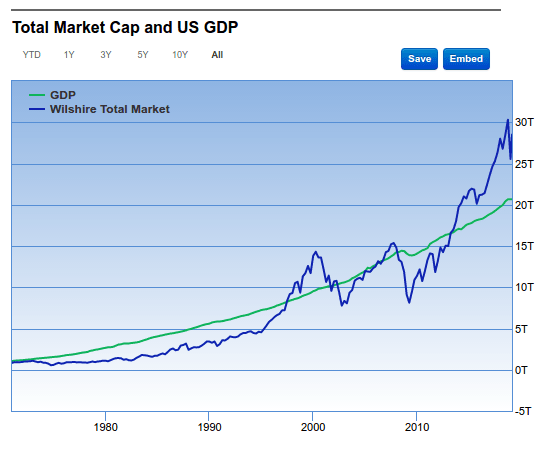 If you like flying machines and are headed to Washington, D.C., be sure and visit the Steven F. Udvar-Hazy National Air and Space Museum, which is the best in the world and even has the Space Shuttle Discovery.