Massive Mine in Canada

This Could Meet America's Needs Forever

Next Tuesday I will be visiting Fort McMurray (nicknamed Fort McMoney) in Alberta, Canada.

I’m taking my “young turks” along for the trip, Nick Hodge and Andrew Mickey.

Each has his own interests in this trip and promises to bring his readers a blockbuster opportunity that could easily be a 10-to-1 return on your investment.

I’ll explain more about that in a minute, but first you need to know exactly why we’re heading north.

As soon as you hear the name Fort McMurray, you automatically think about the vast oil sands reserves that have made Alberta an energy powerhouse. It’s the largest known reserves in the world, second only to Saudi Arabia.

If we have time, we’ll tour some of the operations of the heavyweight oil producers: Suncor, Syncrude, and Canadian Natural Resources. But truth be told, our interests lay north of the large oil sands operations...

In fact, our excursion has nothing to do with oil at all.

You see, about 75 miles north of Fort McMurray is something known as the Alberta Black Shale Project (ABSP).

Again, when you hear the word “shale,” you automatically think about the boom in natural gas shale formations like the Barnett and the Marcellus, which have returned the United States back to the top echelons of global natural gas production.

And again, this has nothing to do with natural gas...

But it will have a dramatic impact on the future of energy.

And it has the potential to be a complete game changer — so much so that the Canadian media is calling it “the mine of the future,” saying the “mineral wealth is virtually limitless.”

And who can blame them?

As we’ve reported here many times before, considering the Chinese control about 95% of global rare earth production, the United States needs a safe and steady supply of rare earth elements. They don’t come much safer and steadier than Canada.

The size of this property is mind-boggling. To put it into perspective, the Alberta Black Shale Project is almost the size of Rhode Island.

It's so big, in fact, that it can supply America's nuclear industry, military technologies, electric car market, and renewable energy sectors forever!

But that’s not what has ground-floor investors so excited. And it’s not why I’m traveling more than 2,600 miles to get a firsthand look at the property...

You see, the Alberta Black Shale Project isn’t your typical mining operation. Unlike deposits locked far beneath the ground (see the open pit copper mines in Chile, below), the mineralization in the ABSP is literally sitting on the surface — like a huge blanket that covers hundreds of miles. 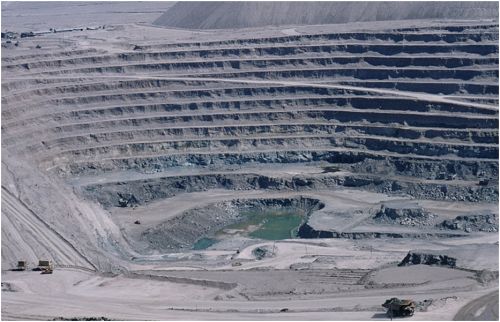 So all you have to do is scoop it up.

Similar to the history of the oil sands, geologists have known about the vast polymetallic black shales for decades, but considered the metal concentrations too low and the extraction methods too costly to make it economically feasible.

But that all changed in 2008 when Finnish company Talvivaara Mining put a new extraction method called bioleaching into full production.

Bioleaching is a process whereby metals are leached from ore as a result of a bacterial action. In a nutshell, the heat and waste from these bacteria separate the precious metals from the ore.

In nature, bioleaching is triggered spontaneously by micro-organisms in the presence of air and water. Commercially-applied bioleaching technologies (like the one currently being used by Talvivaara) use the same action, but they accelerate this natural process.

Several physicochemical and microbiological processes are modified in order to enhance and speed up the metal recovery process. Think of it as metal being dissolved off the rock, but through a natural process.

The process goes something like this: mining, crushing, bioleaching, and metal recovery.

This is the process used by Talvivaara:

As you can tell from the above explanation, bioleaching is a very slow process — one that requires years for good recovery rates.

However, the process has far less of an environmental impact than conventional smelting extraction techniques and is widely used in the processing of low-grade ores, especially those containing copper and uranium. It’s also less expensive.

This makes bioleaching a potentially new mining technique that should satisfy the concerns of environmentalists.

Now, here’s where the opportunity comes in for us...

The ABSP is in its infancy. There aren’t many players. And the ones that are there are tiny nano caps.

And that’s the leverage we’re looking for: a company whose market cap is less than $10 million... yet is positioned on property containing billions of dollars' worth of vital metals.

I consider this to be one of the biggest investment opportunities of my lifetime.

I’ll have a full report on the situation upon my return from Fort McMurray.