Demand for Fossil Fuels to Grow

For investors in oil and gas, the last year has been utter devastation.

An oversupplied market decimated the prices for crude oil and natural gas in the United States, while stock prices for drillers, services companies, and other commodities players collapsed along with them.

Here's a look at the damage: 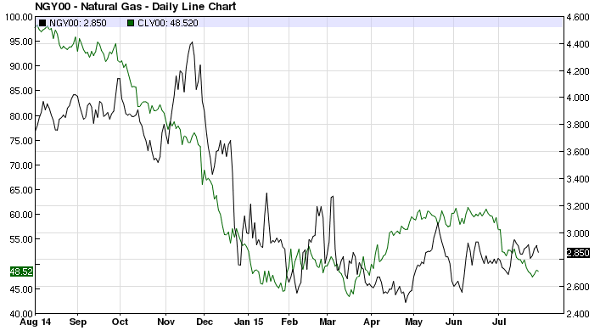 As you can see, these steep and swift price declines characterize what's been a time of slow demand and high production.

In the U.S., producers buoyed by new technologies (fracking) pumped to their heart's content and prompted Saudi Arabia and OPEC producers to boost oil production.

The tussle over market share has flooded the market with oil, crushed prices, and killed investment in the sector.

At the same time, because of the Marcellus, Haynesville, and Utica formations, among others, natural gas production has exploded and caused a long-term slump for U.S. prices.

As they tend to do when things get ugly, investors fled.

However, this slump has many benefits for investors, and the pain could end by the close of this year.

In the second quarter, investment in wells and mines dropped 68% — the steepest decline in nearly 30 years.

But it should be no secret that cheaper commodities are generally good for consumers, and the biggest consumers during this decline in price have been manufacturing companies.

You see, oil and natural gas are refined in various ways and have uses throughout the economy...

Everything from plastic and car tires to aspirin and paint is made from oil, while natural gas is a crucial component of fertilizer, glue, paint, vinegar, and ammonia.

So although the raw fossil fuels themselves are cheap, the companies that rely on these as feedstocks have found a period of loose margins in which they can invest in new plants. 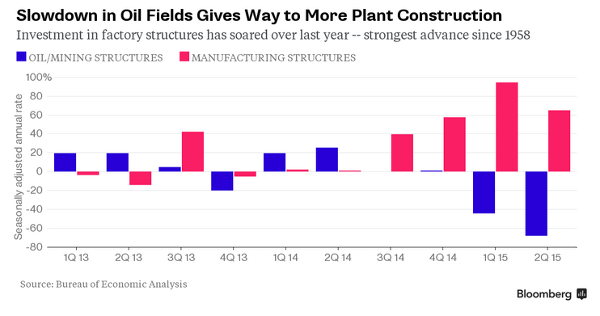 The chart above shows the disparity between investment in oil and mining, which dropped 68% in Q2, compared to investment in manufacturing, which increased by 65% in the same period.

Clearly there's a benefactor of the period of low prices. Automakers and chemical manufacturers have seen the biggest boost, since new cars become more affordable in the eyes of consumers when the price of operation is lower. 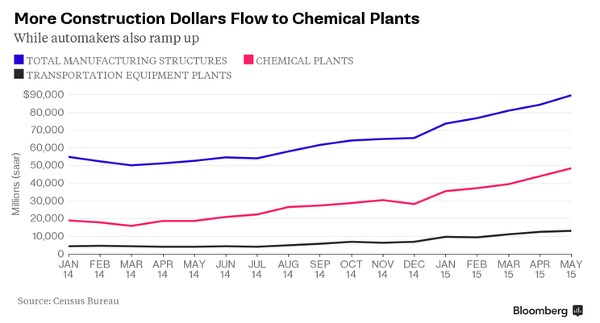 The growth in transportation equipment plants, chemical plants, and other factories aligns precisely with the bear market in crude oil and the slump in gas.

But here's the thing: All of these new plants, created because of a supply glut, will ultimately contribute to the glut's demise.

Although prices haven't yet responded, soon — perhaps as early as December 2015 or early 2016 — we'll see an intense boom for natural gas.

Along with new factories and plants, a convergence of new demand will create a bottleneck during crucial winter months.

This bottleneck stands to drain oversupply while boosting prices for natural gas and for shares of companies in the industry.

In December, the first shipments of LNG leave ports on the Gulf Coast headed for Asia and Europe, while the EPA plans to release its new "Clean Power Plan."

The plan, according to Bloomberg, will “upend a century of electricity generation and distribution.”

This is already happening, as utilities attempt to preempt the rules. According to the EIA, for the first time since recordkeeping began, natural gas surpassed coal for electricity generation in April. 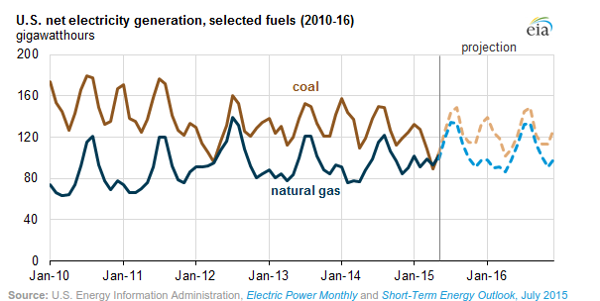 Coal suffers because of cheap natural gas and the new power plan regulations, which are designed to phase out coal as a source of electricity, ushering in natural gas and renewables.

Plus, with seasonal swings in demand, the winter will be a lucrative time for natural gas investors.

And, according to several news outlets, although not widely reported, many speculate that Saudi Arabia and OPEC will begin trimming oil production at the end of the summer in order to boost prices.

If this happens, expect the commodities slump — especially for oil and gas — to return to its bullish ways.