Furthermore, Russian oil is set to drop sharply this winter.

The EU has an energy crisis; the U.S. is in recession.

The Japanese yen is crashing hard, China has a banking crisis, and interest rates are going up everywhere.

And yet oil prices are down to $85 a barrel for WTI because investors think demand destruction will crush oil prices.

This is the lie in the market that you must exploit for the simple reason that demand destruction won’t make up for the lack of supply.

Just look at the inventory situation: 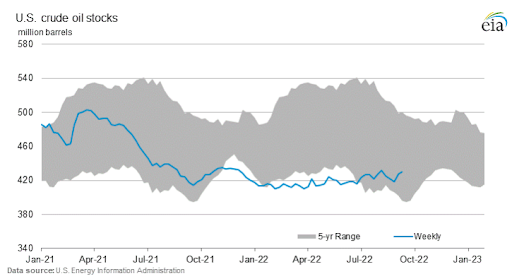 We remain well below long-term averages.

Furthermore, the U.S. will stop pulling crude out of its Strategic Petroleum Reserve in November. That will pull another ~1 million barrels a day off the market.

Russia has long been dependent upon foreign expertise for oil production and transportation. All of those people have left. In a few months when temperatures drop and oil flows get tricky, production will drop as well.

On top of these supply constraints, there has been limited investment over the past eight years in finding and developing more oil. All the while, demand continues to grow. This is why I am bullish on energy.

Right now, the market is giving you a gift. You should take advantage of this dip in oil prices to buy more oil companies.

The Oil Boom of South America

It is currently cheaper to go out and buy an oil company for its reserves than it is to drill for oil. The industry average has a P/E of 8. Many companies pay 7% or 8% dividends. There will be a wave of mergers and acquisitions over the next six months.

One way to play it is to find undervalued oil fields in emerging markets like Kenya, Vietnam, or Guyana. During the last supercycle in oil, I recommended a small Mongolian oil company that went up 759%. I’m seeing those opportunities again.

The Jungle of Love

Guyana is one of the least visited places on Earth and, before it found oil, was the second-poorest country in South America. It is located south of Venezuela and has a population of under 800,000 people composed of eight indigenous tribes, as well as the scions of African slaves and Indians imported to work the cane fields by the former colonial masters, the British.

Guyana won independence in the 1960s and has been relatively free of conflict. The Guyanese speak English and abide by English law.

Over the next few years, these sons and daughters of field workers and substance farmers are about to become some of the richest people in the world.

About two decades ago, Guyana discovered the mother lode of oil. One sector is called the Stabroek Block and is located approximately 120 miles offshore; the block contains 6.6 million acres of sweet black crude.

To put this in perspective, it is the size of 1,150 Gulf of Mexico blocks and contains multiple prospects that represent multibillion barrel unrisked exploration potential.

Recoverable resources for the Stabroek Block are currently estimated at 11 billion barrels of oil equivalent with a lot more exploration to be done.

Furthermore, it is close to the refining capacity in the Gulf of Mexico, which means short supply lines.

And Guyana oil is the good stuff. OilNow writes:

The ExxonMobil reference to oil in the giant Liza Field as “high-quality oil bearing sands” means that the crude oil found in Guyana has been measured to have both a high API gravity (> 30) and a low sulfur content(< 0.5%). This is significant as it means that Guyana’s crude will flow easily from the reservoir rock to the producing well while the low sulfur means that the crude will be less corrosive on producing well and the cost of refining the oil will be lower.

Dubai on the Mosquito Coast

The Stabroek oil field will make Guyana rich. The country will see inflows over the next few years that will provide double its current federal annual budget of $552 billion.

"Many people still do not get how big this is," then-U.S. Ambassador to Guyana Perry Holloway told a reception in the capital, Georgetown, last November.

It may sound far-fetched, but with a population of around [800,000], in per capita terms, Guyana's wealth is set to skyrocket.

I’ve discovered four or five ways to piggyback on Guyana’s path to fame and fortune. There are infrastructure plays as well as a few small caps that I will tell my Bull and Bust Report readers about in the coming months.

Right now, I am doing my due diligence. Look for a special report coming out in the next two weeks.