Could This Trigger a Market Correction?

Written by Christian DeHaemer
Posted May 15, 2014

Bush's Secretary of State took a lot of heat for his little speech about what is knowable. The Plain English Campaign gave Rummy its Foot in Mouth Award.

But I always liked it. It created an outline for a logical discussion on problem solving.

What I didn't know until much later was that Nassim Nicholas Taleb, the author of The Black Swan: The Impact of the Highly Improbable, gave a presentation on uncertainty to the Department of Defense shortly before Rumsfeld's speech. It squares the circle, as it were.

Today, we have a host of known unknowns and probably even more unknown unknowns that, like the proverbial black swan, could bring down stock markets around the world. Here are some of the things I think I think about what I know I don't know.

Nationalism is Picking Up, and China is Greedy

China has claimed the South China Sea to be its private lake. From the WSJ: 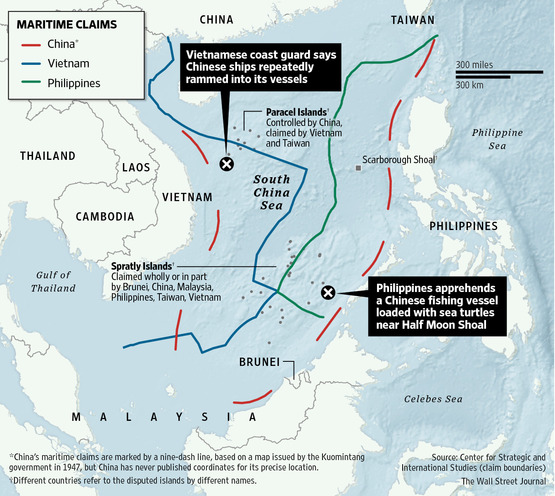 China's “nine-dash line” lays out its territorial claims against its neighbors. Ten years of trying to negotiate these boundaries have yielded nothing because China doesn't want the problem “solved.”

A few days ago, China dropped an oil rig in an area claimed by both Vietnam and China. China surrounded its new claim with a navel fleet including submarines. The Vietnam Coast Guard has protested by ramming these ships more than 136 times.

China has also been fishing in the waters of the Philippines and has an ongoing fight with Japan over a few rocks in the North.

Tuesday night, Vietnamese mobs burned down and looted factories in Vietnam that they believed were owned by the Chinese. Sadly, most of these businesses turned out to be owned by Taiwan.

I looked at one company that's drilling for oil off of Vietnam, expecting it to be a “blood in the streets” buying opportunity. It wasn't. Salamander Energy (LSE: SMDR) is up about 45% over the last month due to a buyout rumor.

China's societal arrangement with its own people is breaking down. The deal was the peasants would accept the heavy hand of government as long as living conditions kept improving. But now, the Mandarins in Beijing are getting worried. The Chinese economy is slowing down.

Real estate prices fell 25% in April year over year. Developers are offering zero-down financing. Exports are fading, and the great Chinese miracle of the last 30 years is looking shaky.

When authoritarian economies get in trouble, dictators stir up nationalism. Since Putin annexed Crimea, he's had the highest approval rating he's ever had.

Germany's export economy is closely linked to China. A looming yuan devaluation will hike import prices. A slowdown in China will hurt.

Furthermore, since Germany closed all of its nuclear power plants, it is now 25% dependent on Russia for natural gas. But due to Russia's aggressive move into Crimea and Ukraine, there is a good chance its gas will get a lot more expensive.

Some 6,200 German companies are doing business in Russia. The Economist claims that 300,000 German jobs depend on exports to Russia.

The German stock market, the DAX, is at record highs. A correction won't be good for anyone.

Perhaps because India is a messy democracy, it has weathered the post-recession storm better than most. India has had the best-performing market since the bottom of the financial crisis. It is up 192.5% versus 180.6% for the S&P 500. But where do we go from here?

If you have ever been to India, you know their roads stink. It is common to see people making gravel by hand. The Indian method of making speed bumps is putting a row of cement blobs on the road, one handful at a time. It is very innovative — but it doesn't do much for your back.

I've been looking at the India Infrastructure ETF (NYSE: INXX) for years now in the hopes that one of these government bailout projects would boost it. The turnaround could be here.

India has a newly elected government that the market likes, and INXX just broke out of its downtrend. There are higher highs and higher lows.

India has the most undervalued currency according to the Big Mac Index, and if you believe in Indian roads, it should be noted that Tata Motors (NYSE: TTM) has half the PEG ratio of Ford (NYSE: F).

One plan now working through government is called Smart Cities. Infrastructure spending would increase 35% to 70% over the next 30 years.

Caltex Gas Workers Strike in Cambodia
Continuing labor unrest in Cambodia has hit Chevron's Caltex gas stations.
Subsea 7 (OSE: SUBC) wins BP contract in Gulf of Mexico
Activities in the Gulf of Mexico are still rolling. Norway's Subsea 7 has won a contract extension with BP to prove it.
Stem Cells Saved My Life
According to the BBC, a billionaire in the Bahamas claims stems cells are making him younger.
Hydrogen Fuel Cells: The Downfall of Tesla?
Lithium has been the front-runner in the battery technology market for years, but that is all coming to an end. Elon Musk is against them, but Jeff Bezos is investing heavily in them. Hydrogen Fuel Cells will turn the battery market upside down and we've discovered the tiny company that is going to make it happen.