Know When to Bet Big

I’ve been investing in stocks for a long time, and I’ve made my share of mistakes. For instance, I lost about half my money by buying Microsoft in 1999 right before the dot-com bust.

The company had gone up so much by 2000 that it had a P/E ratio over 100 and took 11 years of making money for it to become a value stock.

From 2002 to 2012, the stock consolidated. The chart showed one of the biggest “coiled spring” patterns in history. The rule of thumb is that coiled springs tend to go up as much as they went sideways — and that’s pretty much what happened.

You should note that when the chart goes parabolic like it did at the end of 2021, you should start planning your exit strategy. (That doji candlestick last month tells me we should bounce back to $280 before selling off again.) 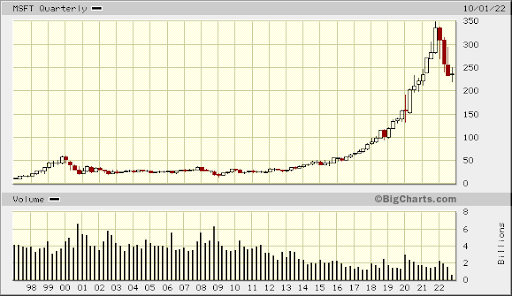 I took a second look at Microsoft in 2012 when it was trading around $29. It had a P/E of 8 and paid a 4.5% dividend, if I remember correctly. The company was growing over 20% a year, and smart tech people were talking about and buying Microsoft's subscription-based products because they were far cheaper than running systems in-house.

It was the old “razor and blade” marketing strategy.

Long story short, in 2012, I took a third of my portfolio and bought Microsoft. With dividends, I got an annual return of 25.51% and made 10x my initial investment. It was a sad day when I sold half of my position a few months ago, like burying an old friend.

You''ll also get our free report, 3 Blue Chip Dividend Stocks to Double by our resident expert Christian DeHaemer.
After the next bounce, I will likely sell the other half.

Learn From the Best

I’m not telling you this story to brag but to inform. You see, all of Wall Street tells you to diversify your investments. Heck, even Warren Buffett will tell you to just buy an index fund to beat more than 50% of the Wall Street hacks.

But Buffett himself doesn't do that. Instead, he puts big chunks of money into what he thinks will be a winner.

For example, Berkshire Hathaway spent $600 million buying Gillette in 1989. The company would sell razors for cheap and make a large profit on the blades. I'm sure you did a case study on this in Econ 101.

Gillette was a huge success and eventually bought out by Procter & Gamble in 2005 for $4.3 billion.

And now Berkshire Hathaway is doing it again. Over 50% of its portfolio is currently in Apple (NASDAQ: AAPL).

The upshot of all this is that the market is going through a bottom process that will likely finish up in the second quarter of 2023. You should be patient. Look for consolidation patterns and think about stocks you want to hold for the next 10 years. Look for strong moats, high dividends, great brands, understated leadership, and a simple business model.

Don’t sell until it goes up about as much as it went sideways. When the chart goes parabolic, get out.