Jim Chanos Got it Wrong on SolarCity (NASDAQ: SCTY)

Last week, I explained how the “new Google” will result in a flood of new renewable energy opportunities.

The first appeared sooner than I thought.

Not long after the big Google announcement, Vivint Solar (NYSE: VSLR) announced that it was teaming up with Google (NASDAQ: GOOG) on its recently announced “Project Sunroof.”

Project Sunroof is a new service offered by Google that will calculate how many solar panels you should put on your roof and how much you'll save on your electricity bill once they're installed.

Here's what Vivint CEO Greg Butterfield had to say:

Vivint Solar teaming up with Google is giving homeowners across the country immediate insight, information and access to rooftop solar power—that's good for everyone.

Indeed, it is good for everyone. But it's GREAT for Vivint.

I also like what Chief Strategy Officer Dwain Kinghorn said in regards to the deal:

Vivint Solar has created an incredible product that's revolutionizing the energy market. It's simple. It's affordable. And together with Google, we're able to let customers all over the country know that solar power is a lot simpler and more affordable than they might have thought.

Indeed. I bet he was giggling with delight when he wrote those words.

Interestingly, this news didn't get that much attention last week.

I suppose most folks were too busy running for the fire exits after the market nose-dived. Which is understandable. Of course, it's also times like these when I like to go bargain hunting. But the bargain here isn't actually with Vivint Solar.

But no one really made the connection, and SunEdison has continued to tank. This past month has actually been a pretty brutal one for SUNE. 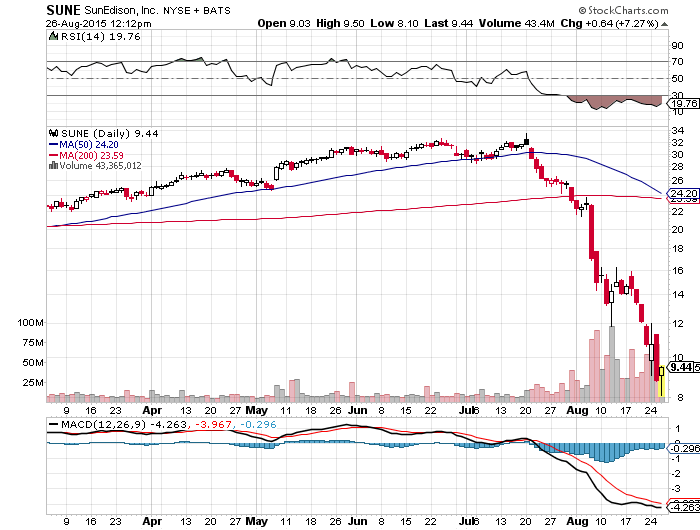 From a less-than-enthusiastic quarter to the overall implosion of the market last week, SunEdison has certainly taken it on the chin recently.

However, the company is worth a hell of a lot more today than it was last year, back when it was trading around the same levels we're seeing now.

Truth is, SunEdison is significantly oversold at this point, and I wouldn't be surprised to see some big blocks being bought over the next few weeks... assuming overall market conditions stabilize.

Chanos Got it Wrong

Another solar stock worth checking out for a bargain is SolarCity (NASDAQ: SCTY).

The stock took a hit on Friday after Jim Chanos announced he was short SolarCity.

Here's what he said that seemed to have sent the stock tumbling:

You basically lease the panels from SolarCity and they collect the lease payments. So in effect, if you put on the panels, you have a second mortgage on your home. You hope it's an asset but in many cases, it turns into a liability.

1.) You don't lease panels from SolarCity; you lease the entire system, which SolarCity maintains and insures over the life of the lease.

2.) Chanos said that if you put on the panels, you have a second mortgage on your home.

Here's the reality: YOU don't do anything. SolarCity installs the system.

And the second mortgage comment doesn't even make sense.

3.) Chanos said that you hope it's an asset but in many cases, it turns into a liability.

I seem to recall that argument earlier this year, but there's no objective data to back up this claim.

Yes, a handful of folks made that claim, but when you dive into the details, you'll find that the service truly is an asset. If you sell your home, the lease can be passed along to the new owner. That lease offers lower electricity bills. The new owner does nothing but enjoys better electricity rates than his neighbor.

It's only a liability if you sell your house to a complete moron. I can't believe Chanos fell for that one. He has an army of analysts working for him. Surely someone should've been able to set him straight on this.

In any event, on the low end, SolarCity is ultimately a $60 stock. It'll continue to hit some speed bumps along the way, but just like SunEdison, SolarCity is a behemoth that's been oversold.

Of course, there are plenty of other bargains out there right now, but when it comes to solar, SolarCity and SunEdison are two solar plays that are ripe for solar investors looking to capitalize on this recent meltdown.