Regardless of where you stand on President Joe Biden’s renomination of U.S. Federal Reserve Chairman Jerome Powell, one thing is clear.

Policymakers are now all in agreement: Inflation is public enemy No. 1.

During Monday’s confirmation press conference, President Biden, followed by Jerome Powell and then Biden’s nomination for vice chair, Lael Brainard, all spoke on the issue. They all appeared strongly united with each other to combat it.

I have to ask, however... What took them so long?

Every financial expert from Wall Street to Kathmandu has called 2021’s inflationary pressures “sticky” for months now. Why are our elected officials just becoming concerned now?

Of course, the answer to this question is still a hotly debated topic. Some experts, like Chairman Powell, actually believed inflation was transitory when it wasn’t. Other experts hinged on the fact that supply chain issues were the root cause of rising prices — a valid argument, but something we’ve also known for months now.

The timing of this new war against inflation is political pandering.

Drilling a bit deeper, many experts missed the obvious. All “the stimi” has run dry, people are feeling broke again, and President Biden’s approval ratings are currently suffering in the wake of inflation.

But now that inflation is a political football, there’s blood in the water.

A report from The Wall Street Journal recently noted Republican Sen. Rick Scott of Florida, who heads the GOP’s Senate campaign arm, sees rising inflation as a “gold mine” of opportunity for the GOP in the coming midterm elections.

A note from Jon Lieber of Eurasia Group further points out the political and economic intermixing:

Powell’s renomination is an endorsement by President Biden of the Fed’s pandemic response and post-pandemic escape plan. This means Biden now owns politically the policies of the Powell Fed and its consequences.

The good news for Biden and Lieber is that Jerome Powell is the right person for the job. Here’s why.

Sure, Powell got the transitory inflation call wrong this year, but no one is perfect. Over the long haul of his tenure, Powell has done a tremendous job navigating the pandemic. Before that, he masterfully managed policies that have produced numerous extended bull markets. A lot of people like you and me significantly grew our wealth under his tenure.

He was also one of the few people who didn’t cave to former President Trump’s Twitter attacks. This one was particularly low-brow:

In an investors note, Randy Frederick, a managing director at Charles Schwab, writes:

Markets like predictability... While Brainard may have been a fine choice, the markets would not know what to expect from her even though the general consensus was that it meant lower rates for longer.

I can appreciate this sentiment. We’ve tried to roil the markets so much already with too much stimulus and spending. We can’t just pull the emergency brake now.

Powell will address inflation but in the way he sees fit... even if that hurts Biden in the polls.

This, of course, put President Biden in a box. He did the right thing by nominating Powell but will likely suffer more in the polls as tapering begins next year.

But where do markets go from here?

Before the Big Crash Comes the Melt-Up

I still strongly stand by my belief that Q4 seasonality will help stocks reach the next leg of this year’s big run. We may even have a true melt-up. More specifically, I expect many of the tech plays that have worked so well this year will continue to work for us.

As I noted last week, there’s still significant divergence in the recent short-term charts between growth and value stocks, and I think your money should remain in these growth names. Take, for instance, the Vanguard Value (black line) and Vanguard Growth (blue line) ETFs over the past month. There’s a sharp divergence. 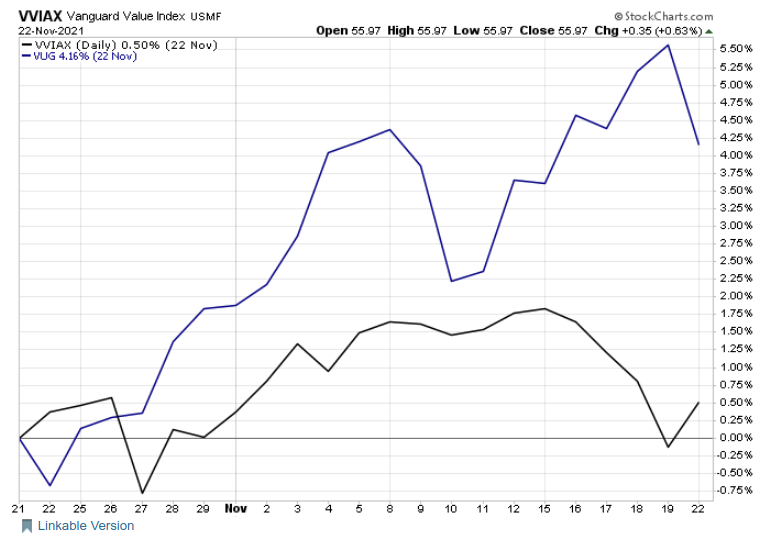 This means we should be able to keep riding the tech train to big money in Q4!

Since we know when we can expect the Fed to begin tapering, come February, I expect a major correction for big tech and the greater markets as a whole.

More on that when the time comes.