Is Oil's Next Supercycle Upon Us?

The whispering has begun, dear reader.

Hushed murmurs that oil is once again making a run to $100 per barrel. I daresay it’s been a while since those rumors have circulated around the campfire.

Of course, things were much different when crude prices were last trading in triple-digit territory.

The last time WTI prices were that high was in June 2014, and the veteran members of our investment community know all too well what happened back then.

Crude prices crashed to around $23 per barrel over the next two years as the Saudis waged a devastating price war against the United States.

Remember, our tight oil boom had been building momentum for years at that point, with U.S. drillers extracting roughly 8.7 million barrels per day that month.

The Saudis were more than willing to let oil prices plummet if it meant the kingdom could save its market share.

Unfortunately, it wasn’t enough to stop plays like the Permian Basin, where companies were operating with much lower breakeven costs compared with other tight oil giants like the Bakken.

In fact, our output rose to over 13 million barrels per day by January 2020.

We were seemingly unstoppable — until COVID hit.

And then all hell broke loose.

To say that the pandemic upended the oil markets would be a gross understatement.

That much was obvious once crude prices turned negative in April!

Remember that global demand topped out at more than 103 million barrels per day pre-COVID.

According to most projections at the time, we were going to see the world’s oil consumption continue to grow, slowly and steadily, for at least another two decades.

However, global crude consumption fell as low as 85 million barrels day during the second quarter of 2020.

In other words, global demand had crashed almost 20% within just a few months. 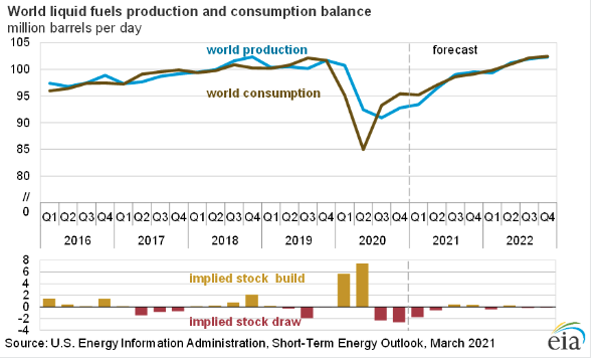 And like clockwork, the market did what it does best: panic!

The fear inside the oil sector was palpable as drilling activity ground to a halt.

If U.S. drillers learned anything from the Saudi price war, it was efficiency.

Is Oil’s Next Supercycle Upon Us?

To put a little perspective on this, there were as many as 1,931 oil and gas rigs drilling under U.S. soil at one point in 2014 at the start of the Saudi price war.

Now let’s fast-forward to 2020, when there were almost 800 drilling rigs in the field.

By mid-September, that number had fallen to 254.

However, the Great Oil Reset is officially behind us.

In fact, those whispers of $100-per-barrel oil may not be entirely out of line, and with this comes the rumblings of oil’s next supercycle.

Right now, the cards are stacked for higher oil prices.

Last month, I told you the most unexpected rally in 2021 would be in the oil sector. But that was an easy call… Just the dearth of drilling activity alone would be enough to make me bullish today.

But what would it take for us to truly see oil prices break above $100 per barrel?

For starters, we would need a strong demand recovery.

And that is something that can easily take place as we head into the summer months, when oil demand seasonally peaks.

This time it isn’t the tight drillers in West Texas nor OPEC+ that we can thank.

You can thank the $1.9 trillion COVID stimulus package that is set to pass the House today.

After that, it goes straight to President Biden’s desk for signing.

Yet this is just one piece of the puzzle for oil’s next supercycle.

Consider that as of yesterday, more than 93 million doses of COVID vaccines have been given out to a little over 18% of our entire population. For the record, that’s more than three times the total number of COVID cases inside the United States.

We’re quickly heading into a post-COVID era, whatever that new normal will be.

The spur of economic activity will be a shot in the arm for oil demand.

Only this time, it will take too long for production to follow suit.