Is it Possible to Make Money While the Planet Burns?

Boy, does this speak volumes! 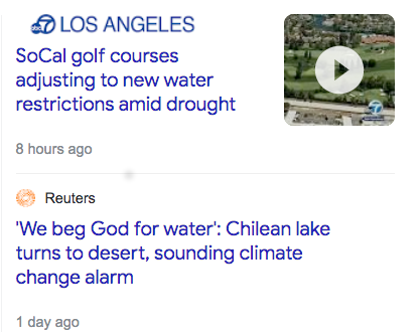 Living in the U.S., we are often insulated from many of life's harsh realities.

I’m not saying there aren't people in this country who are suffering.

Indeed, there are — particularly these days with inflationary pressures absolutely gutting the poor and middle class.

But make no mistake: For most of us, we don’t know what real struggle is.

This is certainly the case when it comes to water shortages and droughts.

To clarify, a drought is simply recognized as when we experience below-average water supplies.

They’re not uncommon and have been around since the dawn of time.

They’re a natural part of the climate cycle.

But here’s where it gets a bit more complicated…

The past 20 years have registered as some of the driest conditions ever recorded on Earth.

While I won’t debate the merits of climate science within the confines of these pages, to deny that a warming planet has exacerbated drought conditions — making them more frequent and severe — would be foolish.

The data is undeniable, as you can see below from the increase in extreme drought conditions over the past 20 years… 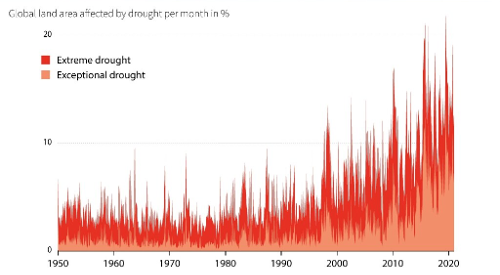 According to the most recent U.N. data, since 2000, the number and duration of droughts have risen by nearly 30%. And while droughts have only represented 15% of all natural disasters from 1970 to 2019, they have had the largest toll on human life, causing roughly 650,000 deaths.

And it’s only going to get worse.

By the U.N.’s own admission, by 2030, an estimated 700 million people will be at risk of being displaced by drought. And by 2050, droughts may affect more than 75% of the world’s population, leaving as many as 5.7 billion people exposed to water scarcity for at least one month per year. Today, that number is 3.6 billion.

Make no mistake: The trajectory we’re on right now is going to put us in a very dangerous situation.

So needless to say, such a crisis offers significant opportunities for those who are smart enough to see the writing on the wall.

Today, I’m quite bullish on water infrastructure stocks, particularly those that offer exposure to water conservation technology and more efficient filtration and distribution mechanisms. These types of stocks can be found in the Ecofin Global Water ESG ETF (NYSE: EBLU), which invests in water infrastructure, equipment, and services. This includes everything from pipes, pumps, and valves to water efficiency products, filtration systems, and water testing technology.

It's also worth noting that given the recent market sell-off, that fund is currently trading at a discount of close to 30%.

I’m also very bullish on energy technologies that are not affected by drought conditions.

While the production of energy using hydro, coal, oil, and gas are quite water-intensive, wind and solar require very little water in comparison.

In fact, there’s one new solar technology that requires even less water than traditional solar and wind power plants.

It’s not even a “power plant” in the traditional sense.

It’s a new type of solar film that can be affixed to any surface, including cars, buildings, and windows, and produce electricity right on site.

It can essentially turn your home into its own generator.

In terms of new energy technologies, it’s insanely disruptive, which is why we’re loading up the boat with shares of the only public company capitalizing on this new technology.

I actually wrote a separate report on this technology, as well as the company behind it. You can access that report here.

No matter how you slice it, increasing drought conditions are a lock.

Not only are they here, but they’re going to get worse.

And while I don’t know how long they’ll last, I do know that access to fresh water is paramount for the survival of our species. And that reality, coupled with the very real fact that the planet is drying out, makes this investment a no-brainer.