Is Fiat Finally Serious about Getting into the Electric Car Game?

Why Fiat Remains a Laggard in the EV space

Verge reported this week that Fiat Chrysler is shopping for EV tech from damaged startups like Faraday Future and Seres.

Fiat has actually been a laggard in the EV space, and former CEO Sergio Marchionne was responsible for much of this. The guy always had a problem seeing beyond the smoke screens of the antiquated internal combustion vehicle. In fact, back in 2014, he actually told potential customers not to buy his company's electric car, the Fiat 500e.

Essentially, the 500e was a compliance car; a car built because the state of California requires that by 2025, automakers that sell their vehicles in California will have to ensure that 15.4 percent of those vehicles are zero-emission vehicles. Basically, if you want to sell your car in California, you need to pony up a few electric cars.

Yes, no one likes mandates, but Marchionne was not being honest when he said …

If we just build those vehicles, we'll be back asking ... in Washington for a second bailout because we'll be bankrupt.

The truth is, no one ever suggested that only electric cars will be allowed on California's highways in 2025. In fact, electric offerings from GM and Nissan still barely register as an accounting error. So by saying what he said, he misrepresented the situation.

Meanwhile, the most successful electric car manufacturer in the world, Tesla, continues to pump out and sell thousands upon thousands of electric cars across the globe.

In any event, now it looks like Fiat is trying to get into the game - albeit a little late. But once again, these guys are really out of touch with reality.

Apparently, Fiat is now in talks with two distressed EV startups in an effort to leverage their technology for the company’s own electric offerings. Why would you seek out help from failing EV companies? Especially when Fiat’s compliance electric car was actually pretty decent. 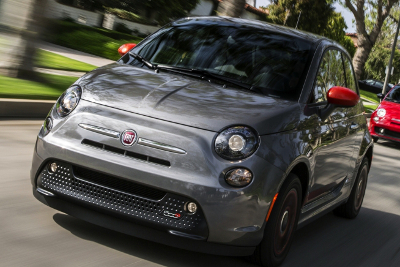 Sure, compared to today’s offerings, it falls a bit short, but Fiat is not a startup with no experience. So why would they go down this path?

I’m not an expert in car manufacturing. Hell, I don’t even know much about cars in general. But what I do know is that while Fiat is dicking around again, GM, Tesla, and VW continue to up the ante on just about everything that makes an electric car desirable. So management’s solution to getting some of this action, because it didn’t move competently the first time around, is to get in bed with companies that are unlikely to amount to anything?