Is British Columbia the New Bakken?

Will Export LNG to Asia

Over the past few months, we've covered various formations and how new technology is allowing access to previously unrecoverable oil and gas.

The rush has created millionaires from Fort McMurray to Fort Worth.

I've heard of farmers on Maryland's Eastern Shore taking heavy equipment all the way to the Dakotas to profit from the boom.

Whether you're a roughneck or an armchair trader, the angle for profit is always the same: Get there first.

HORN IN – intransitive verb – to participate without invitation or consent: intrude

For awhile now, North American oil has been all about Alberta and the Bakken.

Natural gas has been all about Haynesville and the Marcellus.

The amount of energy coming out of those locations is undeniable, the media attention and related stock appreciation are warranted.

And they're undoubtedly helping us lessen our dependence on foreign oil, albeit with much work left to do.

But in the northeast corner of British Columbia, near the border with Alberta, another North American energy story is taking shape. And just as with the others, the first in stand to make the most.

Here's the story as printed last week in the Lake Country Calendar, the pulse of Winfield, British Columbia: 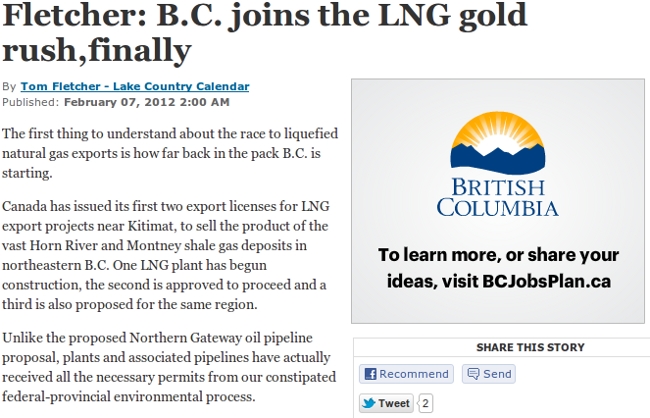 Canada's National Energy Board has granted a license to BC LNG Export Cooperative to ship liquefied natural gas (LNG) from Kitimat to Asian markets.

The license will allow the shipment of 36 million tonnes of super-cooled natural gas over 20 years from a $450 million floating terminal off Kitimat, BC. That's the equivalent of 125 million cubic feet per day.

A few comments about this...

This is only the second export license issued in Canadian history.

The other one came last October — also for LNG exports from Kitimat. That one was for 700 million cubic feet per day from a $4.5 billion export terminal.

Where is all this gas going to come from?

It's called the Horn River Basin.

And it's behind only the Haynesville and Marcellus Formations in terms of the amount of natural gas it holds.

In order to issue an export license, the National Energy Board has to show there's enough gas to satisfy Canadian demand and the export quotas.

Here's what the board had to say about that:

In approving BC LNG's application, the board satisfied itself that the quantity of gas to be exported is in excess of the requirements to meet the foreseeable Canadian demand. The board also determined that the volumes of natural gas proposed to be exported are not likely to cause Canadians difficulty in meeting their energy requirements at fair market prices.

That's bureaucrat-speak for “We're swimming in natural gas up here and have enough for us and China.”

The final point I want to make is about price.

It would only cost Canada (and more importantly, the companies behind the operation) $8 per mmbtu to deliver the fuel — meaning they'd double their investment on every exported btu.

All of sudden, and without much warning or anticipation, British Columbia is becoming the next Bakken.

It's no coincidence the province's local paper has a prominent ad for jobs right next to the story...

The rush up there is about to be on.

And if you didn't get ahead of the recent shale boom in the States, you'll certainly want to get your investments in line ahead of this one.