As the eyes of the rest of the media focus on Israel and Gaza, we turn our attention to Iraq.

And while the country is spiraling into another sectarian civil war, the Kurdistan Regional Government in the Northwest has — in defiance of Baghdad's central government — shipped its first cargo of crude oil to the United States.

The United Kalavrvta oil tanker informed the U.S. Coast Guard that it would be offloading its cargo into smaller ships at Galveston in order to be delivered.

The $100 million cargo is one of four planned shipments by the Kurds of Iraq, and it has been a contentious piece of news for the last few months...

Even before the rise of the Islamic State in Iraq and Syria, the central government in Baghdad — led by a Shiite majority — has excoriated the delivery of oil out of Kurdistan without their consent. It has even threatened to blacklist buyers of the oil shipment and sue anyone involved in the sale.

The U.S. has long agreed with the Iraqi government on its right to its oil, but now it has flip-flopped and allowed the tanker to enter port in Galveston.

This, of course, is another deathblow to the country with the fifth-largest oil reserves in the world that has seen production numbers falter because of the unyielding conflict over the last decade.

Now that the ISIS invasion has spread government officials thin, the Kurds seem to be taking advantage. You see, Kurdistan is a region that is actually better financed and has a stronger, more developed military able to prevent any invasions like those in the central and northeastern portions of the country. 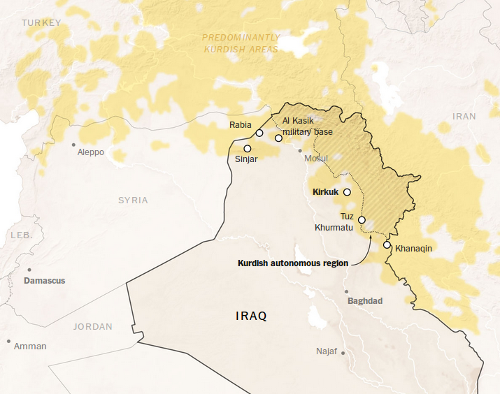 In the map above, the area south of Baghdad has over 60% of the nation's oil reserves, with five super-giant oilfields each holding over 5 billion barrels of oil — and this area is still firmly in the control of the central government.

The highlighted territory near Kirkuk is where the Kurdistan Regional Government holds sway, and the surrounding areas could have oil reserves as high as 45 billion barrels in total — about 4 billion of which are currently recoverable.

The Kurds also appear to have their priorities in order in the event that Iraq breaks up. Although they defied the law in Baghdad, the Kurds still have the capacity to produce a reliable supply of crude and even export those barrels without too much interference from radicals in the area.

And even though the shipment landing in the U.S. over the weekend is more symbolic than anything else, it's clear that the Kurds are attempting to open the floodgates for more exports.

Still, we can't exactly say that Iraq has broken up yet. We can, however, expect the geopolitical turmoil plaguing Iraq and its neighboring countries to continue. It may even be a catalyst for the next big spike in oil prices, especially as global demand is shocked by the shortage.

A paramount factor in this is the crisis in Iraq, and if the central government blacklists a large trading partner such as the U.S., the ramifications could send the share prices of U.S. drillers skyrocketing along with gasoline prices at the pump.

U.S. Ships First Oil Exports in 40 Years
Energy and Capital Editor Keith Kohl examines the historic shipment of light oil condensate from the U.S. for the first time since 1975, and comments on the consequences of the ban on crude oil exports.
Secrets from the U.S. Shale Patch
Energy and Capital editor Keith Kohl reveals one of the most prolific oil pioneers of our generation and how investors can get a piece of his latest shale venture.
21st Century Oil Barons
Energy and Capital editor Keith Kohl tells readers about a new class of oil barons that are forging their empires in emerging tight oil plays across the United States.
OPEC's Oil Disaster
Energy and Capital editor Keith Kohl takes a closer look at why Saudi oil princes are breaking out in a nervous sweat over the U.S. becoming the world's largest oil producer.
Hydrogen Fuel Cells: The Downfall of Tesla?
Lithium has been the front-runner in the battery technology market for years, but that is all coming to an end. Elon Musk is against them, but Jeff Bezos is investing heavily in them. Hydrogen Fuel Cells will turn the battery market upside down and we've discovered the tiny company that is going to make it happen.