I love this image of Putin... 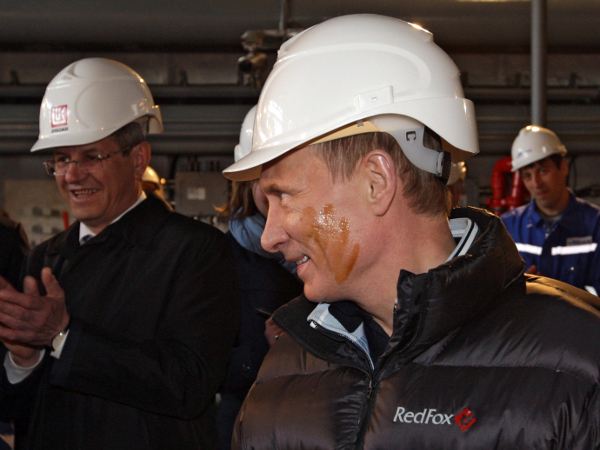 Pictured with Russian scientists and employees of a local oil field services company, the Russian president is seen with his face smeared with crude. The question is, are those outlines of his fingers or someone else’s? Because clearly that smear was put there on purpose.

Make no mistake; Vlad is a PR expert, and given this recent discovery in Russia, he took full advantage.

Of course, the whole dog and pony show is pointless.

You see, Putin was visiting a Lukoil oil platform in the Caspian Sea where engineers were showing off a new technology that supposedly increases oil production by between 1.7 and six times. They’re calling it an alternative to fracking.

The Deathblow for Internal Combustion

I don’t know if there’s any truth to these claims or not.

After all, it’s not like Putin is known for his honesty and integrity. But it doesn’t really matter. Because while the Russian oil machine is parading around a new oil extraction technology, the world continues to move away from the internal combustion engine — the catalyst for most of the world’s oil demand.

If you’re a regular reader of these pages, you know I’ve been very vocal about the transition of transportation technology — which is well underway.

While the internal combustion engine still has a good 10 to 12 years left before being archived along with the typewriter, the rotary phone, and the Betamax machine, its usefulness is rapidly being phased out as new transportation technologies begin to take hold. And when it comes to personal transportation, the electric vehicle is, without a shadow of a doubt, the final deathblow for internal combustion.

I know, some folks will read those words with skepticism. After all, today’s electric cars don’t typically exceed 300 miles on a single charge, and it’s not as if you can recharge an electric car in the same short time it takes to fill a tank with 87 Octane. But as investors, we can’t accurately predict future opportunities if we base those predictions only on what’s available today.

History is filled with great inventions that were trivialized before they changed the world.

Today, Vladimir Putin is attempting to showcase a new oil extraction technology while the world is rapidly transitioning away from internal combustion.

Yes, internal combustion vehicles still have a role to play — right now. But mark my words, in less than 20 years, the only vehicles you’ll find in the showrooms will be electric. And these electric cars will be far more advanced than what’s available today.

In fact, new battery technologies will enable these vehicles to travel in excess of 500 miles on a single charge. And on long road trips, you’ll be able to recharge your vehicle in about the same time it takes you to fill your tank today. That’s assuming, of course, you’ll even need to stop to recharge.

Researchers in the UK and Israel are now running tests on roadways that are wired to charge electric cars as they ride over them. One in particular, developed by Qualcomm, has metal coils embedded into the asphalt. These coils create an electromagnetic field that transmits energy to a receiver to supply the vehicle’s battery.

Imagine your Tesla having a range that is no longer dependent on the size of the battery, but instead on how long you want to drive it. Theoretically, you’d be able to drive from New York to Los Angeles without having to stop to “refuel.” That’s nearly 2,800 miles! You can’t even do that with an internal combustion vehicle.

Can you imagine the ads for such a thing?

And similar designs are being tested on bus routes for electric buses and in taxi lanes at airports.

Make no mistake; the future is full of possibilities... and we’re going to profit from all of them.

In fact, we have a number of reports that outline our favorite new tech plays. Here are three of my favorites:

The future is bright, my friends. Just make sure you profit from it!