Investment Themes for the Next Decade

A Bull Market Decade for Commodities

Instead of the customary next-year outlook, I am closing out the decade that John Perry Barlow so aptly termed "The Uh-ohs" with a two-part article outlining my view of energy for the next decade.

I will begin with the big themes and move on to specific fuels in Part 2 next week.

What We Have Learned

Except for a possible limited glut in natural gas (more on that next week), I now consider as axiomatic that the supply of nearly all commodities is effectively static. The ability of high prices to stimulate new production has failed, or will soon fail, in every case.

Very simply, humanity has begun to bump its head against the ceiling exactly as one would expect when population increases exponentially on a finite planet. I detailed this theme in my very first article for Angel Publishing in 2006, "The Great Awakening," and the three years since have only served to reinforce my convictions... which at the time were considered "fringe."

The events of the second half of the Uh-ohs made the whole world aware that we're getting down to the margins of fundamental needs like food, energy, land, and water.

Oil prices spiked when the margin between supply and demand fell to under 1%, taking the prices of everything from food to building materials with it. China went on a massive shopping spree, snapping up hard assets wherever it could around the globe.

Farmland in undeveloped countries became a hot market, as developing countries began seeking ways to feed their burgeoning populations. The push to make biofuels from corn had unintended consequences on food supply, prompting riots and price increases for grains and meat.

We realized that wildlife is disappearing at an extraordinary pace and that global fish populations are crashing. We saw coral reefs dying, and learned of the "Great Pacific Garbage Patch," a mass of tiny pieces of plastic floating between the Western U.S. and Asia and estimated to be as large as 5.8 million square miles.

We also heard a steady drumbeat of stories about how water was becoming a problem all over the world under the combined pressures of growing populations and climate change, and was increasingly playing a role in other complex systems.

I won't continue the sad litany — if you've been reading me for awhile, you've heard it. The important concept is that there are no supply-side answers to commodity demand beyond current levels.

If supply is static, then we must focus on demand to understand where prices are going, a factor which has more to do with the health of the global economy than ever before.

I anticipate a sharp correction for the U.S. economy some time in 2010 — probably in the second or third quarters — as the plaster applied to the holes in the economy over the last two years begins to crack. Tight credit will continue to constrain growth for several years; although mid-decade I do see potential for more government-driven spending on energy infrastructure (and hopefully, rail).

I expect China to continue to outperform and delink from the U.S. economy over the next decade, provided the latter at least stabilizes. If the U.S. should suffer another sharp fall in the next ten years — and the risk of its doing so by the hand of hyperinflation is certainly non-zero — then it will exert significant drag on China, as well.

Generally, I expect demand growth for commodities in the developing world to compensate for OECD reductions, keeping overall demand flat-to-rising throughout the decade. It is likely that the U.S. will see itself increasingly priced out of the market for oil and mineral assets.

As demand bumps repeatedly against the supply ceiling, prices will continue to follow the pattern in Dave Cohen's chart from August: 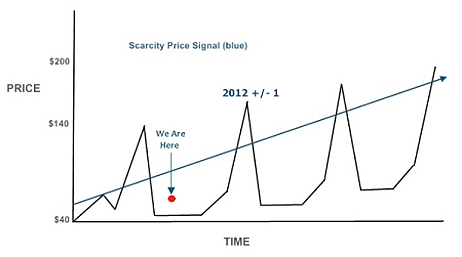 At this point I would put the "we are here" mark a little farther to the right, near the top of the first upslope, as oil has been range-bound in the $70s. Somewhere around 2012, however, I agree with Cohen's expectation for demand to overcome excess supply and cause prices to spike sharply again.

There is no guarantee that the 4-5 year period from peak to peak in this first complete cycle of the second half of the Age of Oil will be a useful indicator. The period of the following cycles may lengthen or shorten, and will be heavily influenced by macro factors like monetary policy. However it does, at minimum, give us a reasonable expectation that we might see two more such cycles over the next decade.

Therefore successful investors will learn to play the range, selling higher highs and buying higher lows. Sentiment on the dollar will continue to be a useful signal, as investors continue to use commodities and gold as safe havens against inflationary fears.

Desperation measures like big water projects and aggressive production of biofuels and coal-to-liquids will probably move forward, even if they're ultimately doomed ideas. Self-interest and political popularity will continue to trump science, and blow up more than a few investment bubbles.

Self-reliance will continue to enjoy a surge in popularity, at least among the 10% or so of the population who are inclined to it. I expect millions of backyard gardens to bloom in the next decade, along with an explosion in residential and small commercial solar thermal and PV. Survival gear and guns should also enjoy continued growth.

I maintain my view that carbon capture and sequestration will be a boondoggle (although it may enjoy a period of investment froth), and the entire focus on carbon emissions will be ineffectual, because it is a backwards approach to the problem. One cannot effectively deal with the problem of climate without first understanding energy. I predicted that Copenhagen would be a failure, and I remain convinced that whatever progress we do make in reducing carbon emissions will only come from deploying efficiency and renewable energy.

As I detailed in November, hard assets will continue to be a hot sector for most of the next decade, at least until investors in them start meeting some resistance (such as hostility to foreign investment and rising nationalism). Next week, one country is losing control of more than $273 billion worth of rare earth metals. My colleague, Ian Cooper, has outlined everything in his latest special report. You can access that report by clicking here.

Gold has been an extremely crowded trade this year, but as long as the world continues attempts to print its way out of a depression that is fundamentally caused by failing fuels, its bull market case will be intact. However, the volatility will be rough and hard to trade. I would be more comfortable taking a modest, perhaps 10% exposure to gold and simply holding it through the decade.

Finally, I believe the coming decade will see a continued and widening disparity of wealth, at least in the U.S. The ranks of the poor will swell, and the buying power of the middle class will be destroyed. A growing resentment toward the rich seems inevitable, and I expect it to lead to some degree of social unrest. It would not surprise me at all to see America elect a hard-right, authoritarian president in 2012 or 2016.

In summary, I believe the defining characteristic of the next decade will be our coming to grips with the limits to growth. We're going to become increasingly sensitized to the decline of natural capital, and our vulnerability to the effects of climate change. Conflicts will erupt over everything from fossil fuels to ecological services (like water purification), and when they do, self-preservation will triumph over lofty concerns like climate change or garbage in the Pacific every time.

Next week I will offer my specific outlook for oil, natural gas, coal, renewables, uranium, efficiency, water, and agriculture — so tune in for that.

As I realize this column runs so close to Christmas Day, I hope these somewhat dark themes find you in thoughtful contemplation, not dread, as you relax with family and enjoy some of the benefits of civilization at its peak.

As I like to say, these are the good ol' days. That will be my meditation, and I hope it will be yours. There is more to life than money, and our moments of peace and joy are priceless.