This Pot Stock Is a Quick Double

The company narrowed losses, improved margins, and boasted a revenue increase of 359%.

But investors yawned. Or rather, they were preoccupied with two other cannabis companies that were also announcing earnings last week.

Those companies were Aurora Cannabis (NYSE: ACB) and Canopy Growth Corporation (NYSE: CGC) — both absolute giants in the world of cannabis, to be sure, but both also releasing earnings that showed a clear shrinking of margins.

Both companies increased revenues, but the “cost of doing business” was a bit more than analysts were expecting. Not that it mattered. Both stocks still sailed along smoothly, while shares of Supreme slightly fell.

So what does this mean?

In a world of overvalued stocks in the cannabis sector, only a few are actually trading at levels that make sense. And those stocks represent a huge buying opportunity for those who actually pay attention to details.

Why I Love Unloved Stocks

I’ve been very successful over the years by buying unloved stocks. Particularly in the cannabis space.

In fact, when I first recommended OrganiGram Holdings (TSX-V: OGI) to members of my Green Chip Stocks private investment community, mainstream analysts wouldn’t even look at it. And the ones who did tore it apart.

But I did my research, and I knew there was something there. And anytime the stock dipped, I reinforced my call to load up the boat. 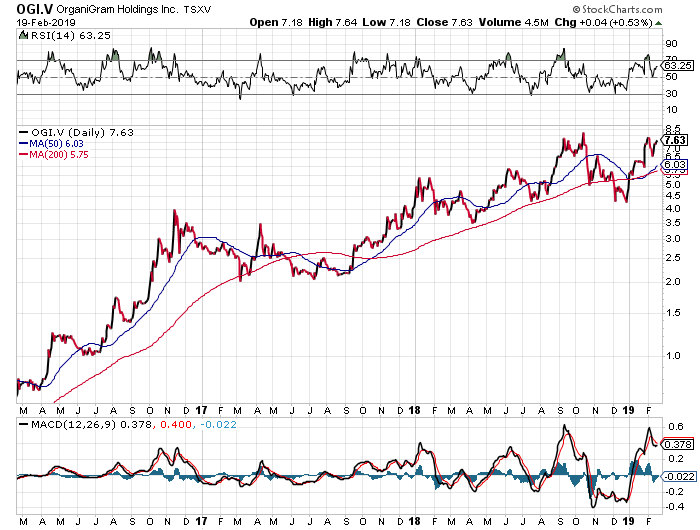 And that, my friend, is just one of many examples of former unloved pot stocks that are now major players.

Now, it’s still not certain that Supreme Cannabis (TSX: FIRE)(OTCBB: SPRWF) will be a major player, but looking at the numbers and all the headway the company has made over the past six months, it’s becoming increasingly clear that this stock is significantly undervalued and ripe for some serious growth in 2019.

Especially now that the stock has uplisted to the TSX and has recently expanded its domestic distribution to eight provinces.

Of course, compared to some of the cannabis stocks that are currently in the Green Chip Stocks portfolio, 62% is peanuts.

It’s a relatively small player, but it has very deep pockets and a lock on nine cannabis operations in Florida as well as another one in the burgeoning Ohio medical cannabis market.

I’ve done my own due diligence on this one and have come to the same conclusion. So I added it to our portfolio, which you can access by becoming a member today.