Investing in the Lithium Uprising

The One Thing Tesla Can't Do Itself

There you have it, folks: the Model 3 sedan is being reserved en masse as you read this.

I even know of a few colleagues that already set up their reservations without needing to see the car itself!

Last week, I elaborated on exactly this idea. Tesla has a reputation for good vehicles and quick innovation. And that's why people were camping outside of their local Tesla stores before they knew practically anything about the vehicle they were about to reserve.

It's a powerful testament to Tesla's popularity.

Now all the company has to do is actually live up to the hype.

Make no mistake about it: there are some pretty lofty expectations for the Model 3.

The biggest worry for Tesla customers is the company's ability to ramp up production. This past year, it only just barely reached its 50,000-car delivery goal.

So it shouldn't be surprising to learn that the company is improving its factory technology to help boost that number to 500,000 per year by 2020.

But let's assume for just a minute that Tesla reaches that half-million benchmark with no issues at all. The company will be able to outfit its Gigafactory and its Fremont, California factory to produce 500,000 cars, no problem.

Keep in mind that many of the car parts Tesla uses are made in-house, too. The “sculptural seats,” pressed aluminum shells, and battery packs at least are all made specifically by Tesla.

But there's one thing Tesla can't manufacture itself no matter how hard it tries — one essential part of the EV recipe that absolutely must come from the outside...

Obviously, lithium isn't something that can be assembled in a factory. Up until recently, it had to be mined right out of the ground.

Of course, Elon Musk has this problem covered... sort of.

You see, Tesla has contingent deals with a few junior lithium players already, both inside the U.S. and overseas. But these pose the risk that production will not happen because the sites these companies are working on are new and untested...

Nothing they can't handle, right?

It's Not Up to Tesla

Unfortunately, this is the part of production that Tesla can't touch.

There's no guarantee those new lithium mining projects will pan out. And then where will Tesla be?

Keep in mind, though, that Tesla's popularity can extend beyond its actual physical reach: companies that scored those contingent deals want to succeed. They want to do business with the company driving the EV market.

And they're using some interesting new mining methods to get there.

Traditionally, lithium is extracted from brines through a process of pooling and drying. That results in fields of green like this: 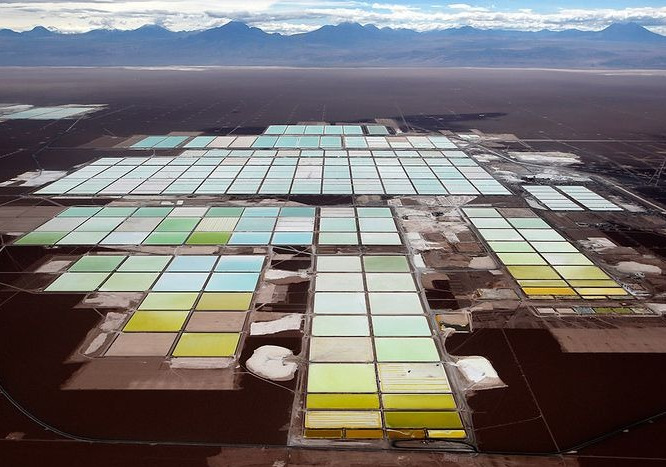 However, if you'll notice, these take up a lot of space. So several companies doubt that large numbers of them will be allowed in the U.S. due to the environmental effects.

Luckily, there are a few alternatives in the works.

For instance, Tenova Bateman is working with Lithium Americas (previously known as Western Lithium) on an extraction method that will use solvents rather than evaporation.

This process is still in development, but it was tested in 2015 and found able to produce lithium carbonate at 99.8% purity.

Lithium Americas is also already experienced with a slightly more difficult lithium production method: pulling it out of clay.

This obviously takes a little more work than simply letting the lithium dry out of pools of water, but it's done Lithium Americas a lot of good.

I explained last year how this business model has helped the company grow and made it an even more valuable investment than lithium major Albemarle.

But it would still be a new process for the hard-rock and brine-based Nevada lithium hub.

And that's where all the big business is going these days.

A long time ago, Tesla said it would be giving precedence to producers in Nevada — the only place in the U.S. that could host a windfall of profits from the lithium revolution taking place right now.

Unfortunately, not all of them will succeed.

What you can be sure of, however, is that the investment gems out there won't remain hidden for much longer, despite the fact that most of them are still flying under Wall Street's radar today.

And you can uncover the best of these stocks yourself when I show you one tiny lithium player setting itself up to become one of Musk's suppliers.

Stay tuned. I plan on revealing the full details behind this opportunity soon.