Investing in the Eagle Ford Formation

Earlier this week, I hinted about a second investment sweet spot in the U.S. oil boom that has been overlooked.

To be more accurate, however, we should say that this play is being overlooked by the wrong people.

Fact is, some of the biggest M&A deals in the United States aren't being made in North Dakota, but rather on Texas soil.

Although some states are geologically blessed with the right oil and gas resources, Texas has had all the luck since the birth of the U.S. oil industry. And ever since the gusher at Spindletop, you just can't lose in the Lone Star State.

After all, this is where the U.S. shale revolution truly began.

By 2006, the success in the Barnett Shale started to spread to other formations across the country. Some of us still remember the buildup to that story:

Here's the best part: It's all happening again in south Texas.

We'll narrow it down even further for you – it's called the Eagle Ford Shale. The formation spreads across southern Texas and is the source rock for several other oil and gas zones, such as the Austin Chalk formation (which lies directly above the Eagle Ford formation): 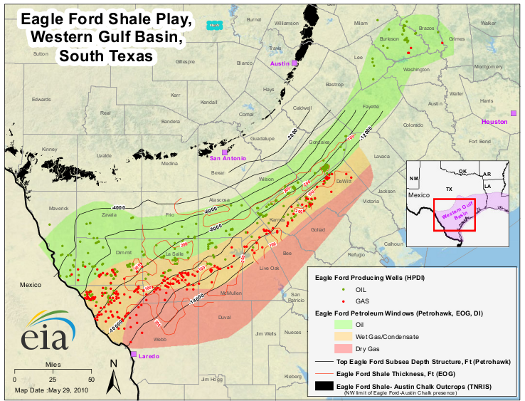 Like virtually every other shale play in the U.S., we've known for decades that the Eagle Ford held a significant amount of oil and gas. Back in the 1970s, however, we lacked the technology to develop it.

And if you want a glimpse at history repeating itself, here's the latest activity that's been going on:

So far, more than 3,000 drilling permits have been granted and there are over 1,000 oil and gas wells on the books that are planned to be built.

Then again, perhaps the Bakken will soon be overshadowed by this play. There's actually more rigs drilling into the Eagle Ford – 255 at last count – than the entire state of North Dakota!

Now, there's a reason why I mentioned that the wrong people are missing the story here. You see, while most investors are starstruck by the multitude of Bakken stories breaking out of the mainstream media, they've most certainly overlooked this opportunity.

It's a mistake that the international community isn't making.

Although the Bakken formation in North Dakota has been the darling of the U.S. oil industry lately, it would be a mistake to discount the potential in south Texas.

Believe me, dear reader, we're not the only ones that have taken notice of the Eagle Ford... and it seems that everyone wants a piece of the North American shale boom.

In fact, I'll show you the kind of growth that investors have been used to: 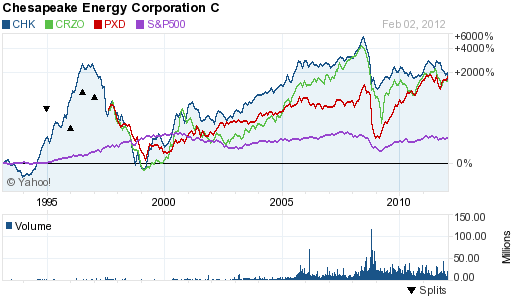 As you can see above, these three oil and gas stocks have crushed the S&P 500 over the years. And all three have been attracting international attention over the years.

But it's not just the Chinese that are scrambling for shale interest, either. That same year, Reliance spent $1.15 billion to acquire a 45% interest in Pioneer Natural Resources' (NYSE: PXD) 212,000 net acres in the play.

The highlight for us came last July in the $12.1 billion BHP Billiton-Petrohawk deal. The buyout deal sent Petrohawk shares 65% higher the day it was announced. Not surprisingly, Petrohawk drilled the very first Eagle Ford wells in 2008. Of course, my many of my veteran readers were well ahead of that play, to their very profitable advantage.

Of course, the deals were back in full swing a few months later in September, when the Gas Authority of India Limited (GAIL) took a 20% interest in 20,200 net mineral acres in a joint venture (JV) deal with Carrizo worth $95 million.

Recently, the Japanese have entered the shale scramble after the country's third-largest grain-trading company paid $1.3 billion for a 35% stake in Hunt Oil's south Texas land. For the record, that comes out to $25,000 per acre, on which the companies plan to drill several hundred wells during the next decade.