Giving Up the Electricity Answering Machine

You know something is hot when even your parents are eager to try it out.

E-mail didn't really reach ubiquity until your dad got an address with an @ symbol in it.

And voicemail didn't fully replace answering machines until your mom gave hers up.

The electricity market is undergoing a similar transition right now.

Giving Up the Electricity Answering Machine

I was at my parents' last week, doing some archery hunting, when I made a stunning observation: my parents had officially adopted the smart grid.

Sure, I had already given them a programmable thermostat and set it up for them. . . but I didn't realize they would go ahead and take the full plunge.

As I was leaving, I noticed a new thermostat hanging on the foyer wall. It had come from their local utility, Delmarva Power. . . which is a subsidiary of Pepco Holdings (NYSE: POM).

It was like when they realized voicemail could be checked from anywhere. . . not just from a machine on the kitchen counter. And there wasn't any fast-forwarding involved.

And just like there were investment implications associated with the rise of e-mail and cell phones (Anyone remember the Nokias and Yahoo!s of the late 90s?), there will be commensurate smart grid opportunities.

Of course, as soon as I saw the new meter, I had to check it out.

And immediately upon opening the cover, I recognized a familiar name: Comverge (NASDAQ: COMV).

If you're a member of Alternative Energy Speculator, you recognize that name, too: 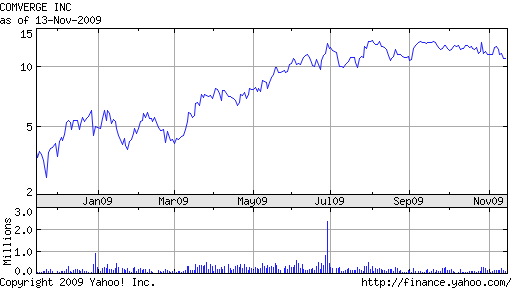 We've closed that stock twice for double-digit profits this year. And we're back in it again.

So naturally, when I saw Comverge made my parents' meter, I was pleased. But I wasn't surprised.

I'm quite aware of Comverge's market presence in the advanced metering infrastructure market. And I've been trying to make you aware as well.

Of course, this company's ~200% rise can be largely attributed to stimulus awards.

If you remember, the Department of Energy announced $3.4 billion worth of smart grid grants a few weeks ago. . . the bulk of which will go to pay for smart meter installations around the country.

So if you're not familiar with the smart grid — and the host of investment opportunities that come with it — you soon will be.

Thing is, many of the uber-public smart grid companies (like Comverge) have already caught the eye of major investors. And even though the company won't be profitable until 2011, smart grid euphoria has caused those investors to drive up the price.

Quite frankly, I knew this would happen. I simply guided my readers ahead of the herd.

Now though, the herd has arrived. And it's time to start looking at the next round fast-moving smart grid stocks.

As you can see from the chart above, meter makers are starting to flatline. I'm still holding Comverge for now, but I'm turning my eyes to other smart grid players that will soon benefit from the stimulus' trickle-down effect.

You'll want to invest in these companies now, before they run like the smart meter makers did. . . and I'll once again have to tell you about hindsight profits.

You can read about some of these up-and-coming smart grid companies here.

I'll be in California this week at GreenBeat 2009 to do even more reconnaissance for you. From Khosla to Doerr to the efficiency profiteer himself, Al Gore, I'll be getting the inside scoop word for word.

And I'll be sure to pass all the info along upon my return.