Investing in our Future Oil Supply

Troubling News from the IEA Oil Report...and How to Prepare Your Investments

It was a simple comment sent to me last week that wouldn't leave my mind.

Normally, I can brush aside inane ramblings that are devoid of proof or reasonable logic. But the reason I was so fired up wasn't because it was directed at me.

It was directed at you.

In a nutshell, the individual scoffed at the peak oil concept. His reasoning came down to the fact that global reserves have increased every few years, thus peak oil is a farce. For starters, I don't think I need to explain to my readers that peak oil isn't about how much total oil is left under the ground, but rather the rate at which we can produce that oil.

I'll get back to his comment in just a minute.

The IEA's oil report paints a sobering picture for future oil supply. Quite frankly, some of the numbers are downright frightful. Finding 64 million barrels per day of new capacity between now and 2030 will be a monumental task for producers, no matter how rosy your personal outlook is for supply.

It's difficult not to see a monumental shift in energy is approaching. Just take a look at the report's oil field decline statistics. Over one-quarter of the world's oil production comes from just 20 super giant oil fields. Some of those fields have been producing for more than five decades.

The Saudis are pumping so much water into Ghawar now, I'm surprised more people don't mistake the field for the world's largest wishing well.

When Ghawar suffers the same fate as Cantarell, perhaps more people will take notice. I can't help think of how Cantarell's fate will affect us. Production at Cantarell has drastically plummeted. Cantarell is only projected to produce 700,000 barrels per day in 2009 (the field topped over 2 million barrels per day just four years ago).

If you think the loss of Cantarell isn't a big deal, I'd suggest selling your car. Unless Mexico can successfully boost production, the country may be forced to cut all exports as early as 2012. That will have serious repercussions for us considering 11% of our oil imports come from Mexico (our 3rd largest importer).

One caveat, however, is in the data used to generate the report. According to the IEA, some of their data is based on future projects or from outside sources. In other words, the IEA has to trust the countries aren't fudging the numbers.

Then again, we know the kind of fudging that OPEC is capable of.

My long-time readers know exactly what I'm talking about. In fact, it's the same chart I sent over to the gentleman who sent in the earlier comment. Notice how OPEC countries more than doubled their reserves in such a small time frame. 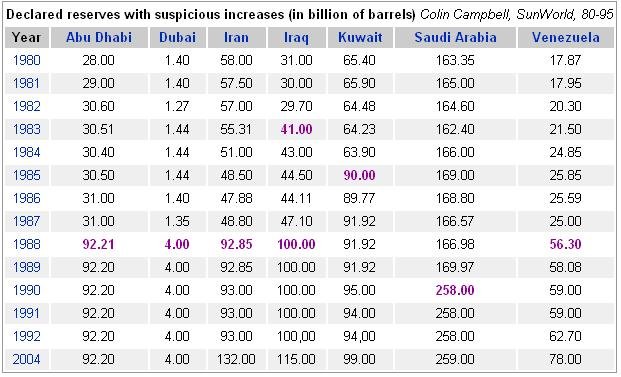 I've said it before, and today will not be any different...

Investing in Our Future Oil Supply

For the sake of going off on a tangent, I'll try not to harp on their reserve inconsistencies.

I've been accused of many things in the past, but looking ahead isn't one of them. I've been inundated with questions about energy stocks as a whole. Clearly, if you don't realize the magnitude of energy's role in our society, perhaps it's best you sit this bear market out.

﻿One part of the IEA report specifically caught my eye, and despite the possible conflict with data, I can't help but agree with Mr. Birol and company.

While the giant oil fields continue to decline, the world will find its oil supply from smaller offshore oil fields.

Investors have two questions to answer:

The answer to the latter is immediately.

In today's market, I haven't met a single investor that believes stocks are overpriced. You don't need me to tell you that there are a ton of quality stocks out there for dirt cheap prices.

Energy stocks in particular have taken a beating since July when oil prices topped $147 per barrel. Driving them down, as usual, are the same panicky investors who are always in trouble when the dust settles. They can't help buying high and selling low. Their fretful mind causes them to dump shares when they should be buying.

The second question is understandably more difficult for you to answer.

Personally, I would feel remiss if I didn't show you a place to find those investments. It simply wouldn't be fair for my newer readers. Finding those energy plays is exactly what the $20 Trillion Report was designed for.

Maybe it's time you joined your fellow Energy and Capital readers.