Investing in Oil Has Changed, Will You Sink or Swim?

Have we averted an oil crisis?

All this week, it’s been nothing but dead cats and learning how to shake hands with your feet.

Some see the doom-and-gloom ahead for the markets as the number of cases in China swells to nearly 100,000, with more than 3,200 succumbing to the virus.

Look, we can talk all day about faux fracking bans and the latest pipeline protests, but when it comes to oil, no other catalyst could be more harmful to prices than demand destruction.

So when IHS Markit projected the largest consumption decline on record recently, you can clearly see why anyone with a dime in the oil market is getting a little twitchy.

Last night, IHS reported that the world’s demand for crude will fall by 3.8 million barrels per day this year.

For the record, this would be larger than the demand destruction we saw during the 2009 financial crisis.

Granted, the only difference now is that a barrel of WTI crude wasn’t trading around $140 per barrel.

So what happens when that demand is in jeopardy? 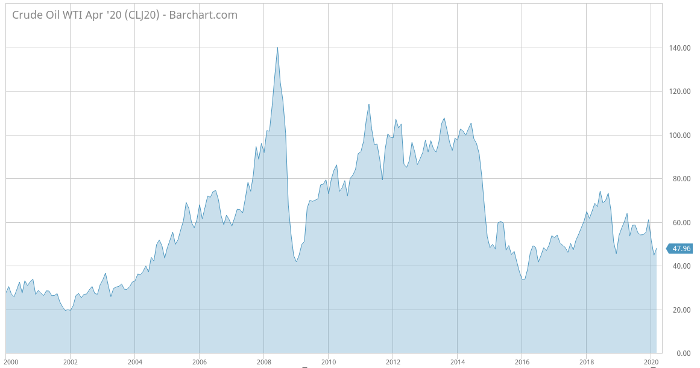 For starters, it’s creating one helluva buying opportunity for the right investor.

By now, it should be obvious that good old geopolitical volatility isn’t enough to move the dial on oil prices like it used to.

Imagine someone telling us in 2007 that a few drones from Iran attacked a state-owned Saudi Aramco facility, wiping out half of OPEC’s largest oil producer’s output literally overnight.

That’s 5% of global oil production cut in one shot.

Our immediate reaction would’ve been to ask how quickly it took for crude to top $200 per barrel.

We both would’ve been laughed out of the room for suggesting that WTI would only jump around 9% after that attack.

Yet, that’s precisely what happened.

We’re long past kidnapping sailors and cheating on quotas, and the cold, bitter truth is that OPEC has lost its tools to inflate oil prices.

So far, we’ve seen OPEC and Russia chop off 1.7 million barrels per day to output.

After watching WTI dip below $45 per barrel this week (Brent crude touched below $50 per barrel for the first time more than two years), even Putin had to admit that won’t be enough.

Although he may have been hesitant to cut production a few weeks ago, Putin seems ready to give the Saudis a break.

With the foot-driven handshakes (yes, that’s a thing now) niceties aside and OPEC+’s meeting officially kicking off tomorrow in Vienna, crude prices are already rallying.

On the table, tomorrow in Vienna is another million barrels per day of oil cuts.

My colleague Luke Burgess echoed my sentiment perfectly on Monday when he told you that oil was a screaming buy.

For anyone that is still wondering how valuable U.S. oil exports have become, consider that our crude exports last December topped 3.6 million barrels per day.

Crude oil is one of the fastest-growing exports for the United States — our third-largest in 2019.

Only airplanes and gasoline (along with other refined petroleum products) were bigger.

There’s one huge catch in this story.

The U.S. oil export story is just getting started… and now is the time to go shopping.