Coal-fired power is waltzing with the grim reaper.

Nuclear power will never get beyond the regulatory purgatory that keeps it from expanding any further in the U.S.

And even the internal combustion engine is gearing up for extinction.

Certainly these claims may upset some folks, but honestly, I’m not here to make you like me.

And that’s why I’m writing this article today.

You see, I’ve helped a lot of people make boatloads of cash in renewable energy and new transportation technologies.

From solar and wind to geothermal and electric cars, my track record is overflowing with double- and triple-digit winners going as far back as 2005.

And I’ve seen it all.

I’ve traveled to the Orkney Islands to see next-generation marine-power technologies being tested in some of the roughest waters in the world.

I was one of the first energy analysts to drive a Tesla (back before the company was even public), I’ve been invited to closed-door meetings with the executives of some of the biggest utility companies in the world, and I’ve even been invited to sit in on DOE hearings during both the Bush and Obama administrations.

So yes, I have a pretty good idea of what’s happening in energy markets and, more specifically, how the global energy economy is transitioning to one that is quickly becoming more heavily weighted in renewable energy.

But I’d be lying if I said I wasn’t completely blown away when I was first introduced to a new solar technology that, quite frankly, could make any modern-day energy technology look like child’s play.

I actually started telling you about this new technology a few months ago.

This was when the company developing the technology was still trading at around $3.00.

And with good reason.

Like me, insiders are betting big that this company has developed the biggest game-changer we’ve seen in energy since the first nuclear power plant went online in 1954.

That was definitely a big deal.

But this is bigger.

Welcome to the World of Liquid Solar

You read that correctly …

The company I’ve been telling you about has developed a liquid that can be sprayed onto glass, plastics, and films. And once those surfaces are sprayed with this “liquid solar,” they can generate electricity.

It’s that simple, yet it’s easily the most revolutionary thing I’ve ever seen in any energy market. And I’ve seen it all.

Now early lab results have found that this “liquid solar” can outperform conventional rooftop solar by 50-fold and easily and cheaply be applied to acres upon acres of glass windows and roof tiles.

And because the efficiency is so superior with this technology, the payback can be realized in less than a year.

For reference: The typical payback on traditional solar is anywhere from seven–15 years.

Energy analysts have taken notice and, as you can see in this chart, so have savvy investors… 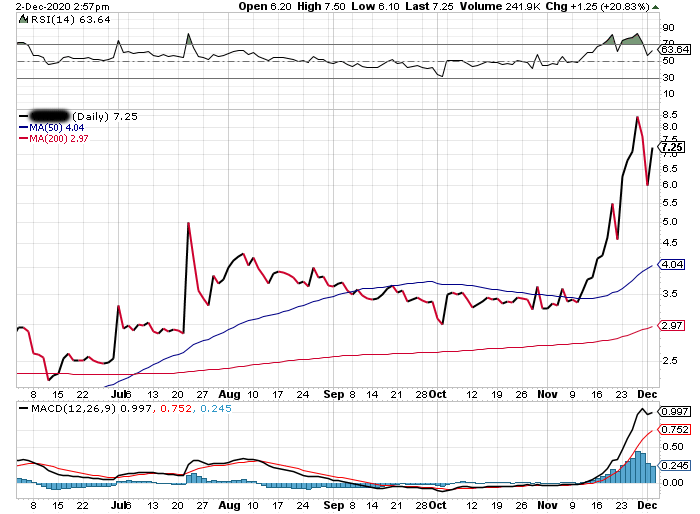 Bottom line: I’ve never been this excited about any energy technology since I got into the this business more than 20 years ago.

And I think you’ll feel the same way once you see how this technology works and, of course, how much money you can potentially make by getting an early piece of this thing.

Here’s a link to all the details on the technology and the company.

Even if you couldn't care less about solar or the transition of our global energy economy, I encourage you to read this report, because I have no doubt it will change your mind.

It’s just that amazing, and the potential for profits is absolutely off the charts.