Cashing in on Nevada's Geothermal Jackpot

In the shadows of wind and solar, another clean energy source is rapidly gaining steam and inciting equally lucrative profits.

With about 10,500 MW installed to date, geothermal energy hasn't yet reached the scale of its cleantech cousins. Wind, for example, has ~142,000 MW of installed capacity worldwide; Solar has about 18,000 MW.

But the wonders of geothermal energy are spreading far and wide. Its capacity is forecast to double in the next five years to ~21,000 MW.

And related stocks have been offering hefty returns to those willing to take a look at this unloved sector. Let's take a closer look to see if we can claim some of those profits for ourselves.

Here's a chart that shows how geothermal has grown since the turn of the century. . . and how it's forecast to grow over the next decade: 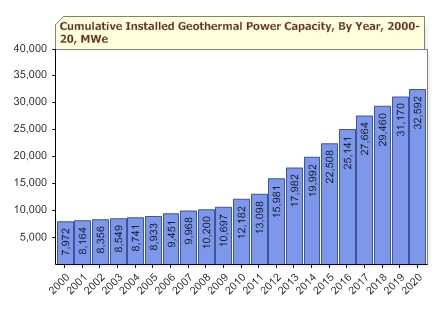 We're dealing with an industry that is about to witness solid growth, spurred not only by energy and climate concerns, but also by policy and financial incentives.

Everyone from Google to Middle Eastern oil sheiks are already lining up to get a piece of the imminent action. Google has invested millions in enhanced geothermal systems. And Masdar, the entire cleantech city being built in Abu Dhabi, awarded multi-million dollar contracts this week to begin drilling geothermal wells.

This is partly because of the nature of geothermal energy. Unlike solar and wind, geothermal is capable of providing steady base load power with some of the highest capacity factors around.

But it's also because of its profit potential. Look at how stalwart geothermal company Ormat Technologies (NYSE: ORA) has blown away the Dow Jones over the past six months: 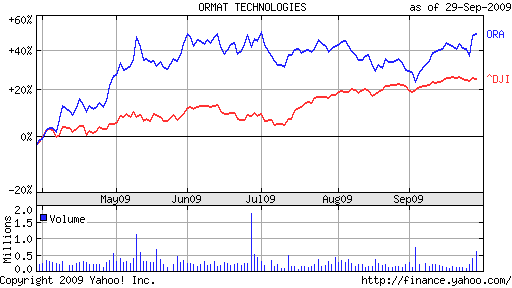 Some of that growth has come from increased activity in the United States, which boasts the largest geothermal market in the world with about 3,000 installed megawatts of capacity.

Ormat has been busy assisting and providing geothermal systems to a few smaller companies here in the states, as stimulus dollars thrust projects forward.

And while this $40 stock could've netted you ~50% in the past six months, it's these smaller geothermal companies that are offering more bang for fewer bucks.

Down the West Coast from Washington and into the American Southwest you'll find some of the best areas for geothermal energy in the world. Nevada is at the top of the list.

Finding geothermal wells there is the new equivalent to Clampett's Texas tea.

In fact, a casino in Reno recently hit the jackpot when they discovered a geothermal water source near a new 17-story hotel. The energy and hot water it will provide will be more than enough for the entire 2.1 million square foot resort.

There's a geothermal jackpot for everyone in Nevada. Ours is going to be a little gem of a company called Nevada Geothermal (OTCBB: NGLPF).

This outfit has been in the geothermal game for a while. . . but they have a new plant coming online soon that has already led to some intense profits, and is sure to lead to more.

Their 49.5 MW 'Faulkner 1' geothermal plant was recently completed ahead of schedule. And investors have taken notice: 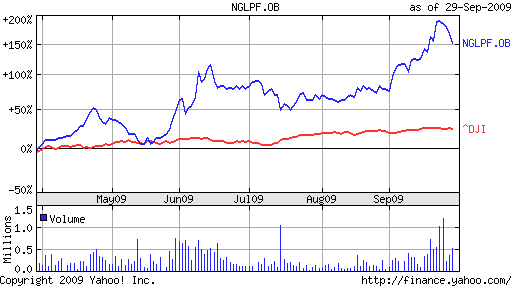 While I recommended the stock to readers back in June — we're now sitting on a 55% profit — I think this stock is headed much higher. Take a look at this section of their most recent press release:

The Blue Mountain ‘Faulkner 1' project has successfully completed testing requirements. . . three months ahead of schedule. Power plant equipment has exceeded guaranteed output levels. The plant will continue to generate and supply electricity while remaining work items are completed. NGP expects to assume full control of the power plant in late September and will declare an "in service date" shortly thereafter.

Folks, this plant isn't even in service yet and the stock has surged more than 150%. It's going to scream higher when the company takes full control and the next press release is issued.

It should be any day now.

My readers have already taken a position and so have I. It's not too late to enjoy the same benefits.

P.S. I've been using a new system to consistently identify winners like Nevada Geothermal over and over gain. Readers like you earned winners averaging 32% each and every month for the past year by adhering to it. This new report outlines the entire system, and how you can use it to make similar gains. . . starting today.