Lessons from the Indiana Gas Boom

You don't need to be an avid history student to know there are valuable lessons to be learned from the past.

This is particularly true when it comes to the energy windfall raging across North America.

As all our readers are well aware by now, natural gas has been slowly taking over the U.S. energy scene.

This isn't the first gas boom to hit U.S. soil. One such bonanza happened more than 120 years ago in Indiana.

The irresponsibility in developing the Indiana gas rush cost residents millions — perhaps billions — of dollars down the road...

Back in the 1870s, a group of miners hit natural gas while looking for coal in Eaton, Indiana.

They plugged the hole soon after and moved on, and it wasn't until a gas discovery in Ohio did they revisit their find...

It turned out to be the largest natural gas field in the world at the time.

Companies extracted roughly 40 billion cubic feet of natural gas in 1890. Drillers flocked to the area, rigs were set up, and pipelines were laid down. In the blink of an eye, towns were flush with cheap natural gas. (Sound familiar?)

With such a massive oil and gas resource under foot, what could possibly go wrong?

Lessons of a Wasteful Past

The story of the Trenton Gas Field doesn't have a happy ending.

During the 25-year boom that followed the Trenton Field discovery, over a trillion cubic feet of natural gas and 105 million barrels of oil were produced.

But it should have been much, much more.

A great deal of the resource was terribly wasted...

Dozens of torches were erected. They would burn day and night. An estimated 90% of the resource was used in these extravagant displays throughout the state: 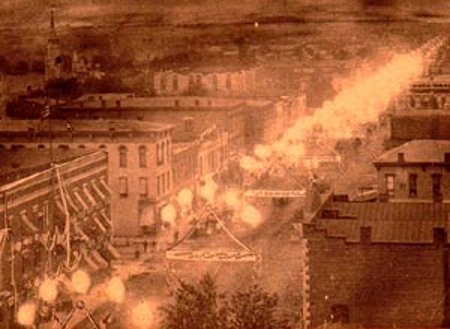 It was only a matter of time before the field's pressure dwindled. Without adequate pressure, the field's oil production ground to a halt:

And thanks to the spendthrift practices used during the rush to produce natural gas, less than 10% of it ever made it to the surface.

This led to a stark realization for both oil companies and investors alike: We're still sitting on a ton of oil.

All that's left is to figure out is how to get it.

No Barrel Left Behind

No doubt you've heard of the tight oil plays that have been raging across the United States, particularly in the Bakken and Eagle Ford Formations.

Wishful thinking aside, production from these shale plays can only reach so high. Their success can only take us so far.

I don't want to pour more salt on the Peak Oil wound, but we must keep in mind that future supply won't come from discovering new giant fields.

Instead, it may have to come from revisiting older fields — like the Trenton Field.

Last month, I mentioned why Texas companies are doing precisely that. The drilling resurgence taking place is breathing new life into the Permian Basin.

And we're not talking about a few barrels here and there...

Six years ago, the U.S. Department of Energy pegged the amount of “stranded” oil resources from already discovered fields in the hundreds of billions: 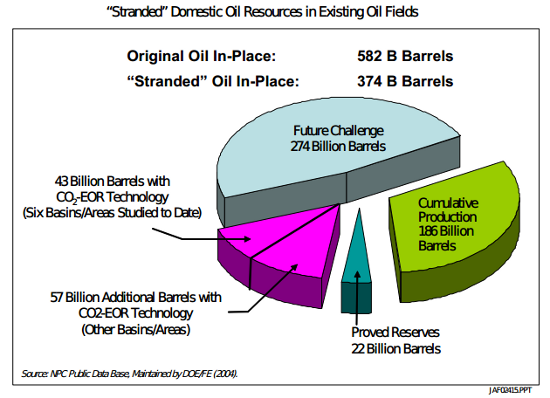 What's more is that up to 43 billion barrels are recoverable through CO2 enhanced oil recovery (EOR) technology.

That's ten times more than the USGS currently believes is technically recoverable in the Bakken Formation!

It's safe to assume companies will be going after this oil hand over fist.

But when it comes to recovering these sources, some companies are better at it than others...

Denbury Resources (NYSE:DNR) is the second largest EOR producer in North America, with production growing at a 30% CAGR during the last twelve years. The company certainly isn't short on resources. It has more than a billion barrels of potential reserves:

Over the last three months, Denbury's share price has rallied nearly 25%. The company currently trades with a P/E just over 10.

In addition to the companies mastering EOR, real growth will be found in those companies improving the recovery technology.

My colleague Jeff Siegel has already done the grunt work for investors when it comes to sniffing out the latest game-changing EOR technology...

This company has developed a brand-new way for investors to profit on the long-forgotten fields of the past.

Their stock will flourish as crude oil prices blow past $100 a barrel in the coming days.