Taking a Lesson from Presidential Promises

“The era of low-cost energy is almost dead. Popeye is running out of spinach.”

Those ominous words were uttered by former Commerce Secretary Peter G. Peterson in 1972.

They've been haunting us ever since.

At that point — just two years after hitting our peak in oil production — reality should have set in. Unfortunately, it didn't.

Nixon's goal to curb U.S. oil consumption was a direct response to OPEC's 1973 oil embargo. Project Independence involved initiatives like reducing speed limits and increasing our use of coal.

But it wasn't until Jimmy Carter gave his Crisis of Confidence speech in 1979 that the real show began...

And by that time, our crude production had fallen more than 17% from the Peak.

You can probably guess how things turned out the moment Carter said: “Beginning this moment, this nation will never use more foreign oil than we did in 1977 — never.”

That notion is almost laughable today, considering the U.S. is using more than 18 million barrels of oil and petroleum products on a daily basis.

And yet, that wasn't nearly as unrealistic as Carter's goal to meet 20% of U.S. energy demand from solar power by the year 2000.

In the 33 years since his first energy proposal, solar has barely moved the dial: 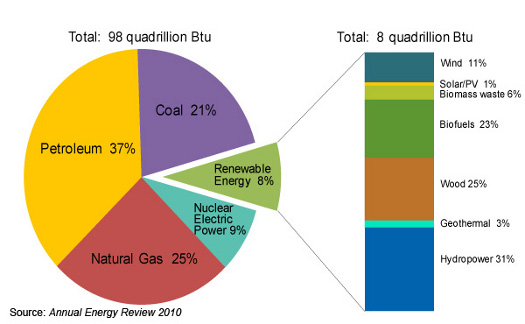 To be fair, his ideas for renewable energy to take on a bigger role in our energy picture weren't without good intent.

About a month prior to that speech, Carter had 32 solar panels installed on the roof of the White House. (That particular effort ended when Reagan took office and resurfaced the building's roof in 1986.)

Every president has had his own take on how to achieve energy independence.

And over the years, the rhetoric hasn't changed much — but it does pick up speed during election years.

A closer look at these speeches in recent years and you will find an opportunity unfolding... you just have to know where to look.

Sure, some of the same blunders have been made over the years (the half-a-billion-dollar loan to Solyndra comes to mind)...

So far, President Obama seems to be sticking to the same formula for U.S. energy independence as his predecessors.

When he addressed Cuyahoga Community College in Ohio the other day, he shared their sentiment: We need to make a serious move toward renewable energy.

Maybe it wasn't as specific as Jimmy Carter's 20% goal for solar, but Obama's making a push for renewables.

And if you pay attention to this speech, you'll see a major difference between Obama's plan and the presidential promises that started with Nixon in 1973.

Buried three-quarters of the way down the transcript:

My plan for energy doesn't ignore the vast resources we already have in this country. We're producing more oil than we have in over a decade.

But if we truly want to gain control of our energy future, we've got to recognize that pumping more oil isn't enough. We have to encourage the unprecedented boom in American natural gas.

In the past, our go-to cheap source of energy was coal.

Not surprisingly, it was also our most abundant resource when Nixon and Carter were living on Pennsylvania Avenue. Coal was a key component to their plan to reduce oil consumption.

It's also part of the reason our demand has more than doubled since 1973.

Today natural gas finds itself in those same shoes.

We know coal production has been relatively flat for decades as more gas-powered plants have come online.

But that's just one of the reasons the shale gas boom has been a nightmare for coal investors...

Compared to coal, shale gas production has grown fivefold since 1990 to more than five trillion cubic feet per year. That's about 30% of our total gas production.

For the next several decades, it will be the cornerstone of U.S. energy policy.

The key here is to look beyond the drillers and find the right plays with the technology that take this oil and gas boom to the next level...