Greetings from the small town of Dayton, Maryland. Today we will waste some digital ink trying to figure out this market.

The stock market, they say, climbs a wall of worry. And boy, do we have some things to worry about. First of all, there's inflation. The inflation rate hit 6.8% in the latest reported data — the highest rate since 1982 — and it's projected to be at 7.1% for all of 2022.

1982 was a long time ago. I was a high-school freshman. Although I have vivid memories of Tammy Coramear, who wore these tube-top shirts that showed off her shoulders, I have very little recollection of inflation.

The only thing I remember about inflation — aside from the parental units' lively complaints about the price of gas — was that one day the quarter I stuck in a soda machine wasn’t enough. The price of a Mountain Dew had risen to $0.35.

I only mention this because I am well past middle aged though not quite into my dotage. Most people alive today in the United States don’t remember runaway inflation or how to deal with it.

History tells us that when inflation first hits, people can’t believe their good fortune. In the Weimar Republic of Germany, which saw inflation spike in the 1920s, Germans sold their family jewels, grandfather clocks, and nice furniture to those with more stable currencies like the Austrians.

The Germans couldn’t believe that they could get twice as many Deutsche Marks for Grandma’s bed as they perceived it was worth. It was only later, when the bed cost four times as much to buy back, that they realized they’ve been had. 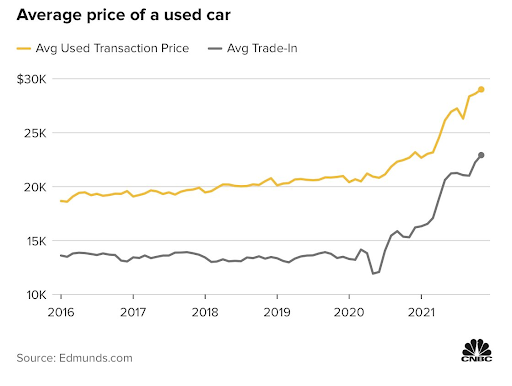 Perhaps the most interesting dynamic of the pandemic economy is used cars. Used car prices are up 30% to an average of $29,000. People will tell you they put 40,000 miles on a car that they’ve owned for three years and are selling it at the price they paid for it.

They say this in a giddy voice, not believing their good fortune.

There are several factors at play in car pricing. People moved to the suburbs or are staying off public transport, car companies can’t find chips to produce new cars, etc.

But I suspect that some large portion of this is a monetary problem. There is too much cash chasing too few products. Since 2020, the Fed has created $6 trillion new dollars. Total U.S. GDP is only $20 trillion.

Paul Volcker, the Fed chairman back in 1982, knew the way to stop inflation was to drive up interest rates and shrink the money supply. This he did, which solved the problem but caused a recession.

The current Fed chair, Jerome Powell, seeks to do much the same thing. He will take his foot off the gas by winding down the $120 billion-per-month QE program that gave newly created money to banks, consumers, and businesses.

No one knows if Powell will have the fortitude to go all the way like Volcker did or how many rate hikes will be needed. The consensus is that the Fed will hike rates four times this year, starting in March.

On the flip side of these worries, it would seem that the U.S. is near full employment, with a 3.9% unemployment rate and over 10 million job openings, as well as a chance of a post-COVID economic surge once omicron burns itself out. Charts from South Africa show that virus cases drop down as fast as they went up.

We also have first-quarter earnings due any moment. In the next two weeks, we will have a much better picture of what 2022 will look like.