I Hit a Tesla This Morning, and I Liked It

I hit a Tesla this morning, and I liked it.

No, it wasn’t on purpose, if that’s the first thought that came to your mind. It was a minor fender bender that happened after this particular motorist thought it was a good idea to change lanes into me. The look of guilt coming out of that cream-colored, $100,000 Model S was priceless.

If anything, there was a stark realization that I may have to get used to seeing more of these cars on the road.

Right now, there are only about two million electric vehicles out there, just waiting for their first accident.

But you have to start somewhere, right?

Don’t take my word for it, just take a page from history...

You won’t recognize the name Ransom Olds, but you should.

He was the son of a blacksmith who made his first steam car back in 1894.

By 1897, Ransom started a little company called the Olds Motor Vehicle Company. Now, even though I know you’ve heard of Oldsmobile before today, you may not realize how influential he has been in our lives.

Truth is, you and I both owe Ransom a lot more credit than he gets.

If I were to ask you to tell me the most important car in history, I’ll bet your first thought would be to say something about Henry Ford and the Model T.

I know, I know... wasn’t it Henry Ford’s brilliant idea to create an assembly line?

It wasn’t Henry, it was Ransom.

In 1901, Oldsmobile began churning out the first mass-produced car, the Curved Dash Runabout: 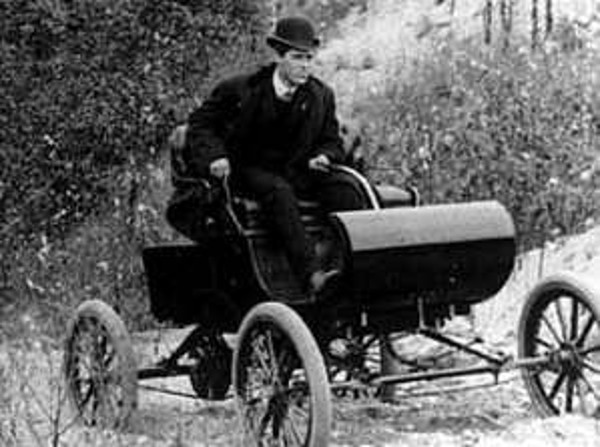 This two-cylinder beast was pumping out an eye-popping 5 horsepower, and I won’t even speculate what its 0-to-60 time was on a quarter-mile track.

Mind you, this was seven years before the Model T rolled off of Ford’s line.

The reason we’re taking this little trip through history, however, isn’t to right the injustice of Henry Ford taking credit for the creation of the assembly line, but rather to recognize how quickly we adopted the gasoline-powered automobile.

About 425 Curved Dash Oldsmobiles were built that first year. In 1902, production topped 2,500 vehicles.

When Oldsmobile joined General Motors in 1908, things really took off, and, well, you know the rest... there are now over a billion registered cars on the road.

By 1920, companies like Ford were selling well over a million cars per year.

And we’re about to cross another pivotal moment in history...

I was reminded of that this morning.

Some of the more optimistic reports suggest that 90% of all passenger vehicles in Europe and North America will be electric within the next 23 years.

I understand that may be difficult for most people to believe. After all, the IEA just revised its global oil demand growth in 2017. The IEA now believes the world will consume a mind-blowing 97.7 million barrels of oil every day this year.

When we breach the psychological benchmark of 100 million bbl/d, I have a feeling more people will finally understand our crude addiction.

Make no mistake; that’s a massive hurdle for companies like Tesla to overcome going forward.

But it won’t happen unless Musk and friends are able to find a secure supply of materials necessary to mass-produce cars like the Model 3... or any of the 70 different models of electric cars you can buy this morning in China.

And I don’t mean lithium; that boom is well underway.

You don’t need me to tell you that ahead of the herd is where you want to be when it comes to this market.

Like lithium a few years back, one critical ingredient to Tesla’s future success (and that of any company hoping to build a lithium-ion battery) is quietly booming.

You need to check this one out for yourself.