Believe me, it doesn’t take much to move oil prices.

When it comes to hurricanes, most people take it as a given. We assume every hard-hitting storm that makes it on land will drive crude prices through the roof.

We can’t blame anyone for this kind of thinking, can we?

In the case of Hurricane Florence, which brutally pounded the Carolinas last month, the storm barely moved the needle on prices.

By the time Florence made landfall on September 14th, WTI crude was still trading just shy of $69 per barrel. The storm also had a negligible effect on gasoline prices, too.

It wasn’t until October that oil prices broke higher, topping $77 per barrel for the first time in nearly four years.

As you read this, a new threat — Hurricane Michael — may have already made landfall.

And it has some investors asking whether or not we dodged a bullet this time.

First, nobody should ever say we dodged a bullet when it comes to hurricanes.

More than $38 billion in property damage can be attributed to Hurricane Florence, which makes it the sixth costliest Atlantic hurricane, according to the National Hurricane Center.

The catastrophic damage and flooding that occurred was absolute, and 53 people lost their lives from the storm.

And even though Hurricane Michael isn’t going to dump the extraordinary amount of rain on Florida that Florence did, the faster-moving storm will still pack a punch.

But there are some differences between the two that may affect oil and gasoline prices.

Unlike Florence, which slammed into the East Coast, Michael’s path inland took it through the Gulf of Mexico.

Whenever a storm threatens the Gulf of Mexico, there’s always a ripple of concern within the oil and gas industry.

Think back to two of the most infamous storms in recent history, Hurricanes Katrina and Rita.

Here’s a look at the paths of those two hurricanes: 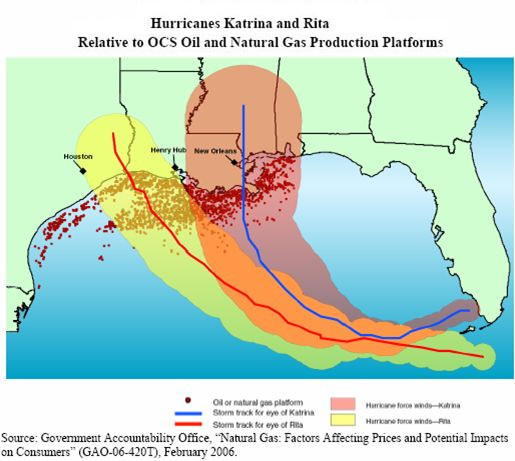 Now, if you really want to understand the impact these storms had on the U.S. oil and gas industry, then just take a quick glance at how devastating the 2005 Atlantic hurricane season was for production: 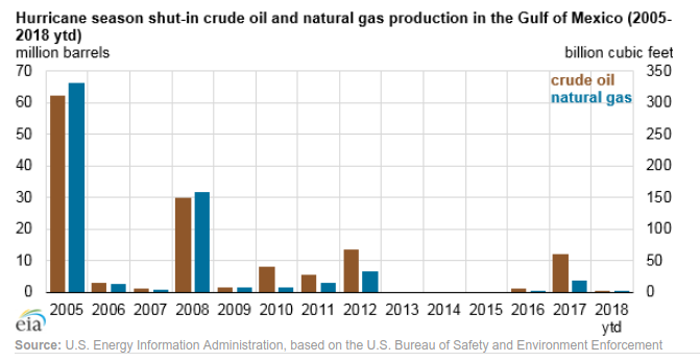 So far, almost 20% of oil output in the Gulf of Mexico has been shut in, and approximately 10 platforms and five rigs have been evacuated.

Dodged a bullet? No.

Could things have been worse? Absolutely.

Below, you can see the tracking for Hurricane Michael: 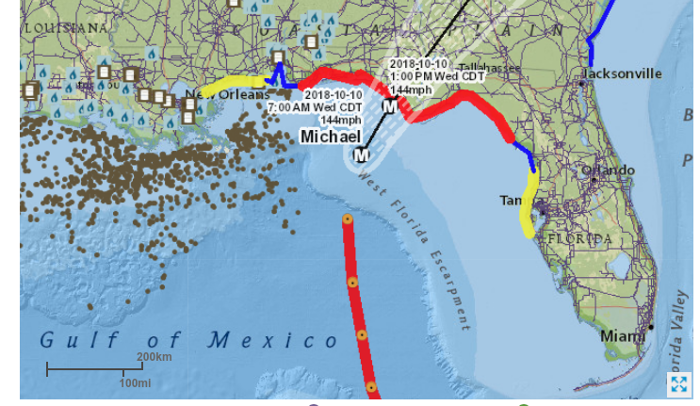 I have a feeling some operators are breathing a quiet sigh of relief now.

Look Beyond the Storm

In fact, AAA reported earlier that gasoline prices in Florida dropped and shouldn’t be affected.

Statewide, residents are paying about $2.82 per gallon, which is the same price they were paying a week ago.

Trust me, things could be worse from the supply side.

However, that doesn’t mean crude oil prices aren’t about to head higher — they are!

And the reason has nothing to do with hurricanes.

The clock is ticking on Iran sanctions taking effect... three weeks and counting.

If you want to pinpoint a bullish catalyst for higher oil prices, this is it.

Six months ago, Iran was exporting 2.5 million barrels per day.

Those exports are rapidly dwindling.

WTI crude is poised to make a run on $80 per barrel in October and even higher in November.

Stay tuned, because there’s a small, unlikely group of stocks that’ll reward investors as we move into the next phase of oil’s bull market.